On Monday it was announced that South Bank parkrun Event Director, Gareth Saunders, had been awarded a Medal of the Order of Australia (OAM) “for service to sport through recreational running events” in the 2017 Queen’s Birthday honours. Gareth had called me the previous week to let me know this was happening however little did he know that I was actually asked to be a referee for his nomination back in November last year. I felt privileged to have been asked to do this and was absolutely thrilled when Gareth called me with this news.

I first met Gareth way back in early 2012. We had arranged to get together in Brisbane’s beautiful New Farm Park with a plan to run the proposed New Farm parkrun course as Gareth had put his hand up to be Event Director of what would become Australia’s second parkrun location. When Gareth did arrive, 15 minutes late and on his mountain bike, it was clear that only one of us would be running as the other had consumed a few too many wines the night before! I’ll let Gareth tell the rest of the story -

“From the moment Tim and I met in New Farm Park, I realised that this whole concept of free, 5km timed runs was something that was really worthwhile and was going to change lives, one Saturday at a time. It certainly changed mine.

By the end of the first year of New Farm parkrun, our event was so popular that it became obvious we needed more inner city options. Tim and I got together and started discussions on how to make our next move. Two things happened at that stage, I became the National Operations Manager and South Bank parkrun was born.

I spent a year as National Ops Manager before being elected President of the parkrun Australia Board. While on the board, I had the support and privilege of working alongside some stand out individuals however after two terms it became obvious to me that I had reached the extent of my abilities in this role. As such it was an easy decision to step down to focus my attention on my growing family and South Bank parkrun.

While New Farm parkrun was where it all started for me, South Bank parkrun is where I call home and have set up my parkrun roots. Despite being fortunate enough to have been involved with the management and establishment of parkrun in Australia, for me, the real magic of parkrun happens at the events and it is in my role as Event Director I have really found the most happiness.

I have been blessed with having so many high calibre Run Directors over the years that it has really made my role at South Bank parkrun quite easy, and while they do all the hard work organising the event each week, I just get to sit back, scoop all the glory and marvel at the fact that so many people turn up each week to participate in the simple free 5km timed run concept created by parkrun founder and living legend, Paul Sinton-Hewitt.”

Gareth and I often reminisce about the very early days of parkrun in Australia when we spoke almost daily discussing how parkrun would take over the country, one 5km event at a time. 6 years later, the future of parkrun Australia couldn’t be in better shape and there is no single individual who can take more credit for this than Gareth Saunders OAM.

Gareth, on behalf of all parkrunners, I congratulate you on this incredible recognition and thank you for everything you have done for us over the last six years. 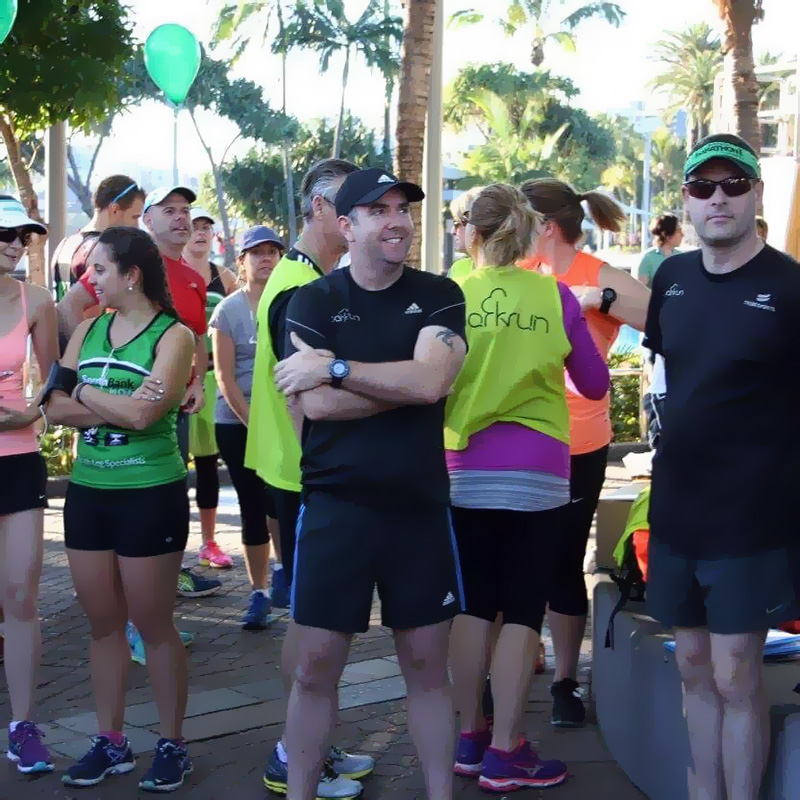 And finally, to Gareth’s amazing wife Melanie, thanks for sharing your husband with us. Gareth has given so much of himself to our organisation over the years and this wouldn’t have been possible without the encouragement and support you have given him.

Here’s to the next chapter.