It has taken Frances Thompson three years to complete her 100th parkrun alongside her husband John. In between, she has had breast cancer, a double mastectomy, chemo and then last year multiple surgeries for breast reconstruction and for carpal tunnel in both wrists. She also had cochlear implant surgery, due to gradually going deaf in one ear.

But during all that time, parkrun has been a constant for her… 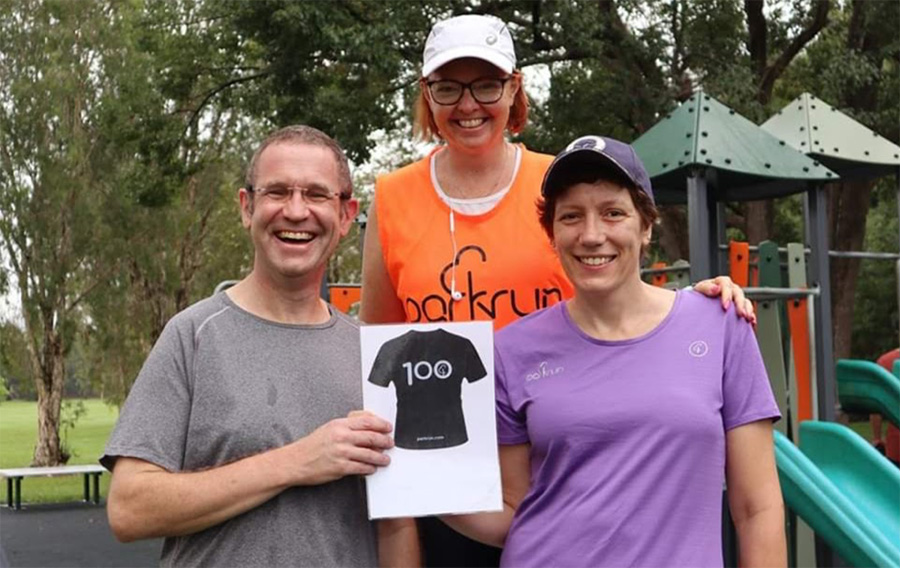 My husband and I started doing parkrun in 2016 in Bendigo, Victoria and the volunteers and parkrun team were always supportive and encouraging when I came to parkrun during chemo or after I’d had surgery. Whether I was walking or doing a slow jog or being tailwalker I was always cheered on to the finish line.

Several of my doctors told me they wished they could prescribe exercise instead of pills. Some people just want medication but don’t realise that getting some exercise can help them better to get better. 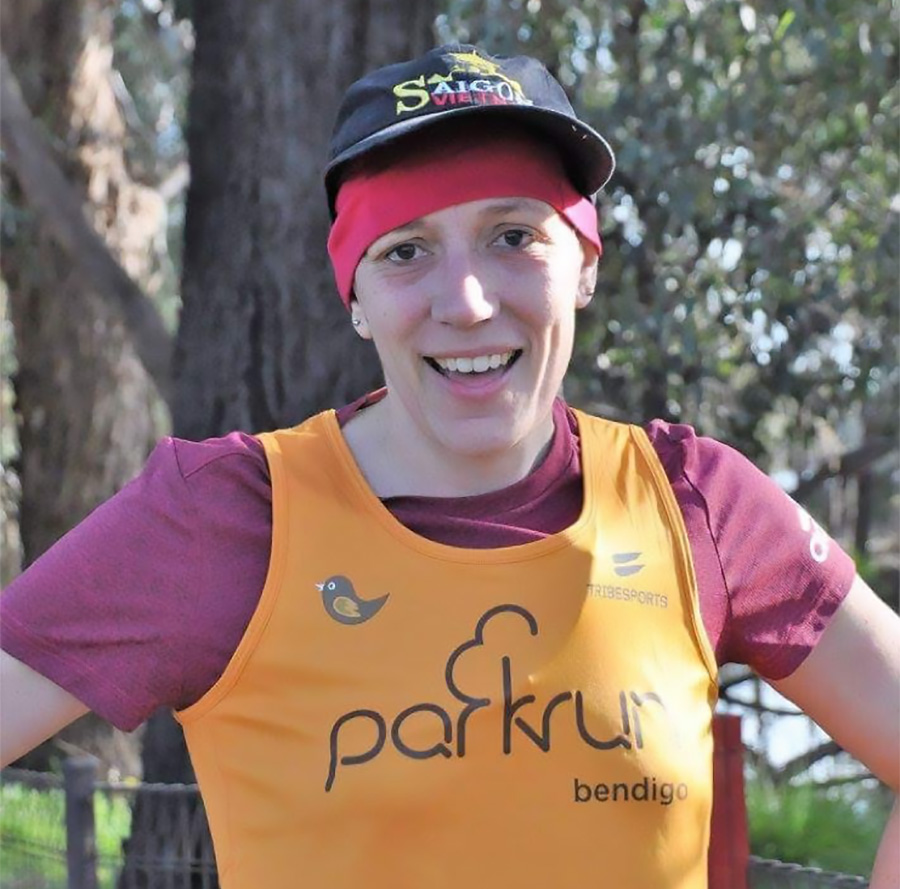 2017, a couple of weeks after mastectomy, just started chemo, not that unwell yet, so still managing to run

For me, even when I was really unwell during chemo, getting out on a Saturday to get around a parkrun course made things not so bad, and the wonderful Bendigo volunteers kept me going. Chemo treatment makes your mouth taste bad, often a metallic taste. It gives you a brain fog and you feel lethargic. You are also bald, so that makes you feel self-conscious. But if I felt able to get up and get moving then walking didn’t make me feel worse and being out in the park generally made me feel a bit better. Brisk walking means your salivary glands are a bit more active than if you are sitting still, and increased saliva meant I didn’t notice the terrible taste in my mouth whilst I was up and moving. It certainly helped distract me from the misery of my situation.

I wasn’t supposed to be walking my dogs after mastectomy (major chest surgery means you can’t put stress on your arms), but I worked out that I could connect a double lead to a waist belt, meaning hands-free daily walks for the dogs, out in the bush, where we were unlikely to encounter any other dogs.

We then moved to Brisbane and our home parkrun is now Mansfield. Whilst I was having different surgeries I wasn’t allowed to walk 5km, so I did a lot of volunteering. If you’re new to an area, this also helps you get to know your area and meet new people.

I’ve done 20 parkruns in Mansfield during the year that we have lived here, and during the various surgeries I’ve had in Brisbane, it has then been Mansfield vollies who have cheered me on and helped me get to the finish line.

I’ve now recovered from my various surgeries, the cancer is gone and I feel so much better. I will probably never get back to my pre-cancer PB, but from my point of view, that really doesn’t matter. It is really irrelevant whether I walk, run or shuffle. It doesn’t matter what my speed is. I’ve got off the sofa and I am out in the park, getting some exercise. 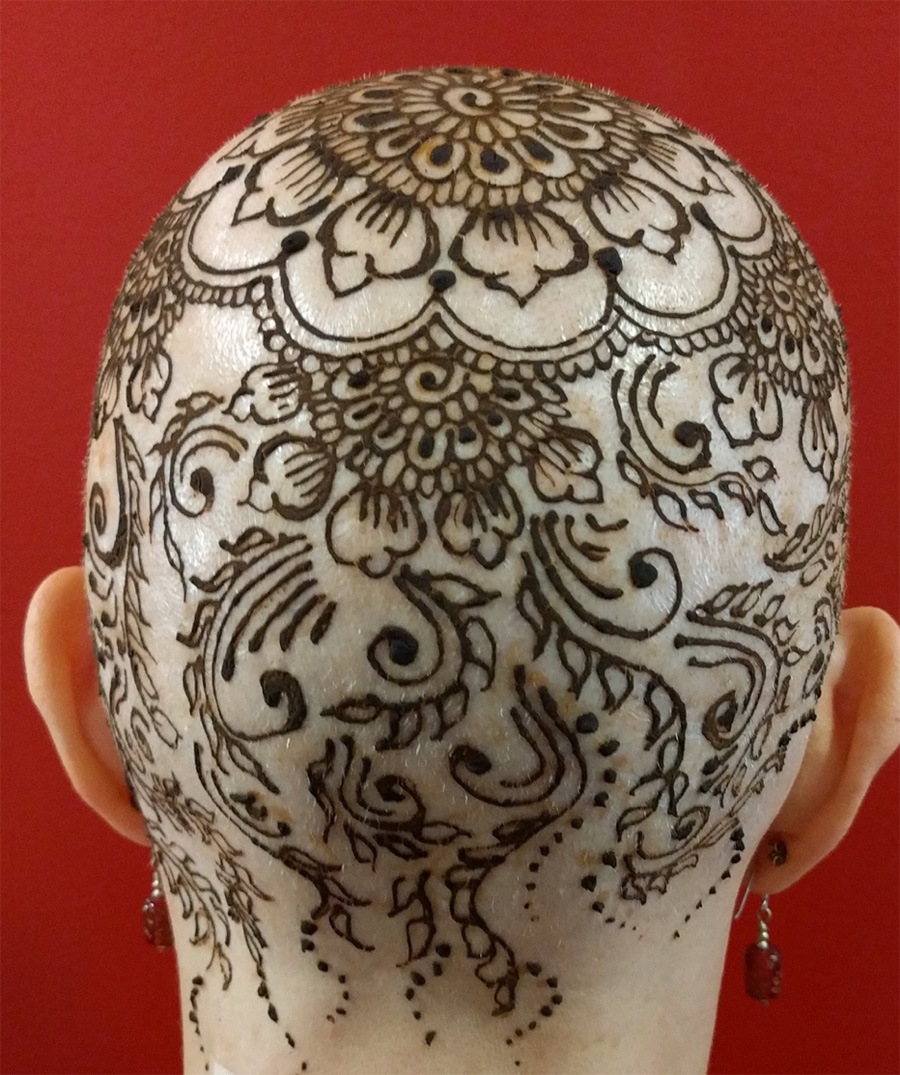 If you’re bald due to chemo, get your Muslim friend to do a henna design on your bald head

I’ve got to 100, a half-deaf cancer survivor, who’s not even a very good runner. My husband John is the fast runner in our family, always aiming to get under 24 minutes.

I’m thinking of aiming for an alphabet of parkruns next, and some overseas ones too when on holiday. And there are quite a few letter C parkruns around Brisbane, so I’m aiming to complete a pirate one as well (you need to sail seven seas and you need an arr …)