The Canning River Regional Park covers both sides of the Canning River, Perth’s second main river, which joins the Swan River Estuary through its South-Eastern suburbs.

Canning River parkrun (CRp) is a circular course that takes in many of the park’s natural features. But we are getting ahead of ourselves. CRp opens an Event Carpark every week, carefully planned in conjunction with the City of Canning. This reduces crowding in the main carpark popular with other park users, including for the Canning River Eco Education Centre and the Canning River Café. This really paid off in managing our growing numbers, which in April peaked at 373.

The event starts under a line of trees near the Eco Centre, with the usual event briefing and acknowledgement of the Beeliar Noongar people who owned the land.

We head East along the river, past Canning City Council, taking in views of the river and seasonal wetlands, crossing at the Greenfield St footbridge. From there we go briefly along a fringing suburban footpath, before plunging back through shaded bushland, swinging left at Snake Bridge (avoiding any wildlife), and on past the Tai Chi people in a park. We then flow down another footpath to Rubbish Bin Corner where we turn right into open woodland (more shade), up a steep hill then gently down to Smile Corner. The smile is because it’s only 350 metres to the finish via a grove of casuarina trees and samphire river flats, onto a boardwalk, and across the lovely Kent St Weir.

The weir divides fresh river water upstream from the salty tidal estuary. Magnificent birds, reptiles and insects frequent the park, and we were especially blessed one parkrun early last year to find dolphins active at the weir. We veer left into the finish funnel off the weir to friendly clapping and cheering. The scanning volunteers sit at a covered picnic table which also hosts the PB and milestone bell, which when used, evokes more clapping and cheering. 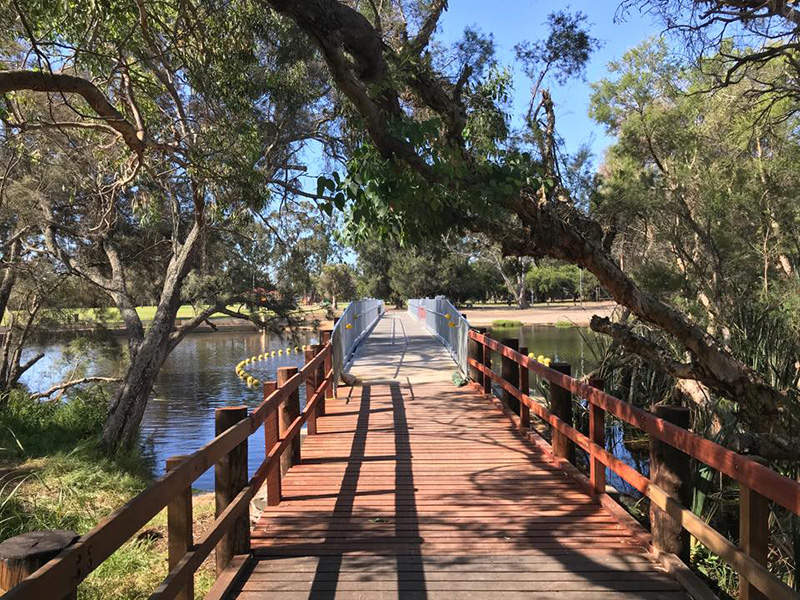 Wilson Park where the event finishes is amazing. As well as hosting hordes of socialising parkrunners, canoeists are putting into the water, children are playing earnestly, people are walking and riding, families are setting up picnic BBQs, and Krav Maga are running a self-defence class. As you leave, a ukelele club is mustering. At one end of the park is a station for the really extensive Clontarf model railroad, toot, toot! Many parkrunners don’t go far after the event, making the most of the Canning River café next door. 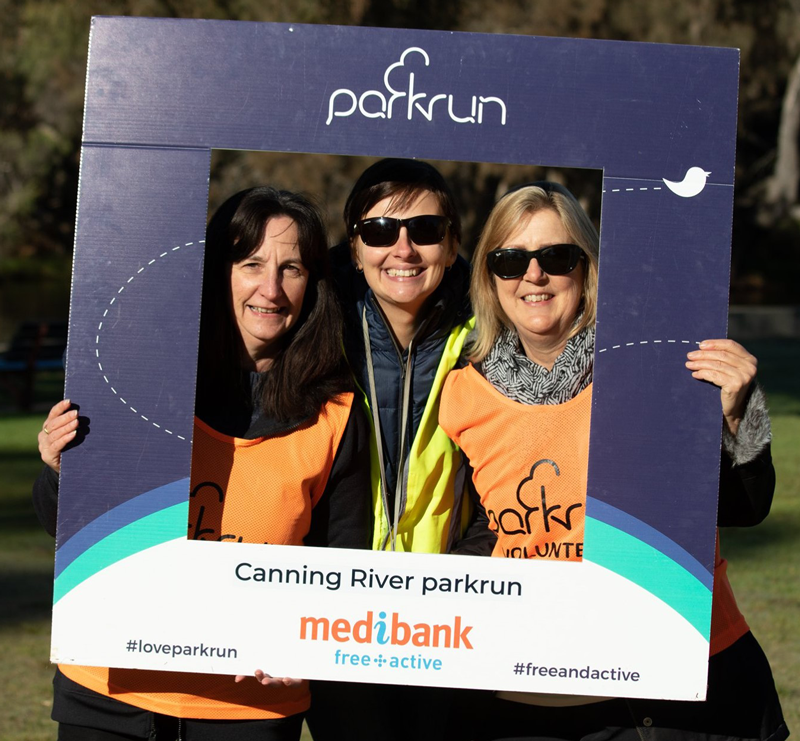 We had our biggest ever crowd of 373 in March. A feature is our level of child and youth participation, consistently over 20%. This is driven mainly by the number of families who make parkrun a habit. While most are primary aged children, we have recently begun to see more teens. We are immensely proud of our diversity in running prowess, gender, age and fitness levels. 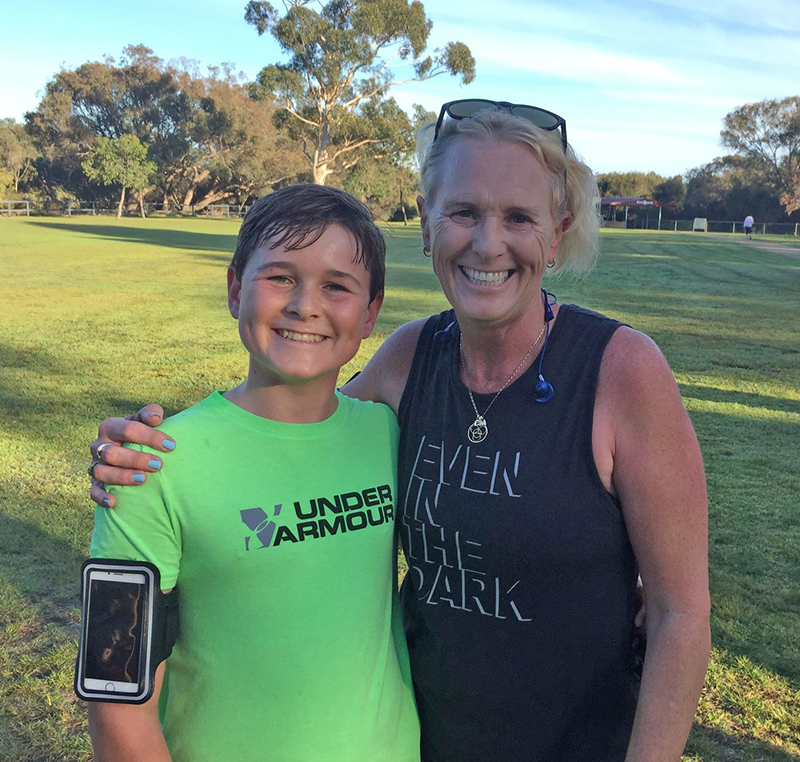 Sarah James has been the Event Director for nearly 18 months, providing excellent leadership and support to the whole team, during a time of growth for CRp.

A particular sadness for the team was the untimely passing of one of its newer members, Graham Upton on Christmas day. With permission of the family, the news was shared with the whole CRp community, and many wore Chelsea colours (royal blue) at the following event in his memory. 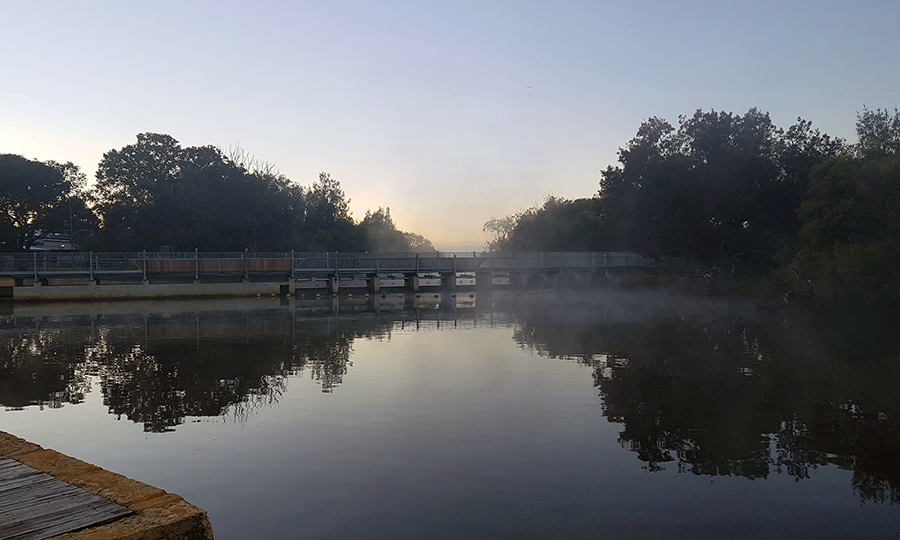 We have also lived for many months with unfortunate news concerning Andrew Pengelly, one of our longest standing event team members. He is a parkrun veteran from the old country, with 346 runs under his belt. Andrew was diagnosed in 2018 with early onset Parkinson’s Disease. He has read the research and demonstrated the finding that vigorous exercise can stem its progress. He recently shared his news with the whole CRp community. He is presently undertaking a series of runs to raise money for further research, click here to follow his journey. As well as inspiring others, Andrew was responsible for much of the recent planning for our successful event carpark.