To fight or flight – using parkrun to help with anxiety

Ballarat parkrun stalwart and Event Ambassador Bruce Purdie was at the launch of Nhill parkrun, surrounded by more than 25 parkrun newcomers, when his chest tightened.

Knowing about “fight or flight” mode from experiences with a family member, Bruce slipped in to fight mode and got on with his Run Director duties. But his hands were still trembling and no one knew what he was going through. At another event, when large numbers were expected, it happened again.

His breathing was shallow, his brain was racing and at 7.45am when things were supposed to get busy, he was looking for somewhere to hide. “I went to the finish flags, away from the gathering crowd and the team of volunteers, I took some deep breaths, consulted the briefing notes and after few minutes in my safety zone, I was closer to functioning normally. The actual briefing was a blur. The next 50 minutes rushed by and I remember standing with the token person as the last person crossed for a new attendance figure. All I could do was fist-pump and I sensed a wave of relief from others, too. The lesson learned was that it didn’t kill me and I guess I have used that experience to cope on other occasions,” Bruce said.

With one in four Australians suffering from anxiety disorder, it’s clear that on every Saturday at parkruns around Australia, someone might be struggling and often, in silence. And no one is immune, with CEO of parkrun Australia Tim Oberg having already openly shared his story about his battles with anxiety.

According to HealthDirect Australia, people with anxiety disorders are often unable to stop worrying about seemingly unimportant things, and they can perceive situations as much worse than they actually are. Anxiety can disrupt concentration, sleep and the ability to carry out everyday tasks. People with anxiety disorders often feel compelled to avoid stressful situations and sometimes avoid going out altogether. Physical symptoms include shortness of breath, a pounding heart and trembling hands.

While Bruce has never been formally diagnosed with an anxiety disorder, he can see what he’d previously put down to nerves or stage fright was probably anxiety. “I now understand those episodes at parkrun were the flight mechanism. I now do things like deep breathing, mindfulness and even meditation,” he said.

Bruce, who has 130 parkruns to his name and has been a volunteer more than 150 times, said by becoming more aware of his anxiety, he now keeps an eye on other Run and Event Directors to provide a hug or some comforting words of support if needed.

While Bruce has mostly experienced episodes of anxiety at parkrun, others such as former Minnippi parkrun Event Director Carmel Rogers have battled with it before they became parkrunners.

A parkrunner of six years with 176 runs and 95 volunteer stints to her name, Carmel now uses both the community aspect of parkrun and the opportunity to stay active as a way to stay on top of her symptoms. “As a single mum with no family in Brisbane, parkrun gave me a community, it gave me a tribe, something to be responsible for, something to look forward to each week. One of those key factors to battling mental health is having something to look forward to. The volunteering has been just as important as the exercise part of it. I always say at parkrun, strangers come together as friends and then friends become family,” she said. 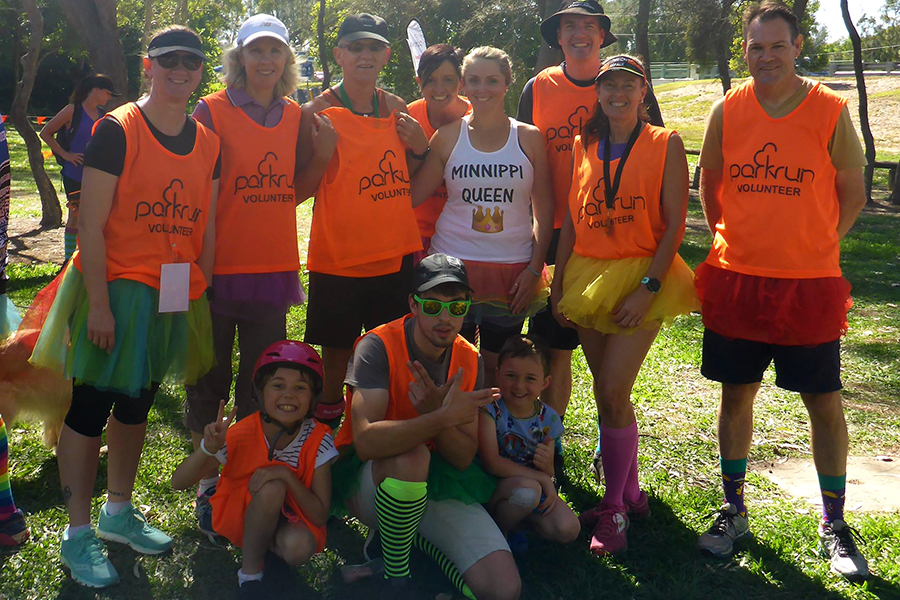 Melbourne-based GP Dr Andrea Lung said she saw many patients with mental health concerns, including anxiety and depression. A keen parkrunner at Albert Melbourne, Dr Lung said when treating anxiety disorders, she wouldn’t always use medication as a first line of defence, but rather “lifestyle interventions”. “These include diet, exercise and meditation. Regular physical activity increases well-being and improves mood as well as decreasing anxiety,” she said.

Those suffering from anxiety, could also become socially isolated, Dr Lung said. parkrun was special because it offered both the ability to stay active and endless social-connectedness opportunities.

“parkrun is an inclusive, friendly and community-based event in a supportive non-threatening environment, providing patients with the opportunity to connect with people in their community through either exercise, volunteering or even a post-run coffee,” she said.

Dr Tammra Warby who is a GP and medical educator based on the Gold Coast said while parkrun offered the obvious benefits of physical activity and being part of a community, it also gave participants the chance to be outdoors, which can also help with anxiety.

She said a 2016 study by Dr Danielle Shanahan from the University of Queensland found those who spend at least 30 minutes each week in a local park have a much lower risk of suffering from mental health issues. There was research to support that exercising in a group as opposed to exercising alone had a greater impact on reducing symptoms of anxiety. Dr Warby said the fact that parkrun was free also made it more likely people would be able to use it as a way to treat their anxiety if she prescribed it. “If exercise is to help people suffering from anxiety, it needs to be affordable and accessible, which parkrun is,” she said.

Event Ambassador Sarah Calder is another parkrunner who has used her Saturday morning parkrun ritual as a way to manage symptoms of anxiety.

Sarah started parkrun at Wyndham Vale in 2016 but had previously been diagnosed with an anxiety disorder a year earlier. Sarah used running as a way to manage her symptoms but then became injured. “Running was one of the ways I dealt with anxiety. Then I couldn’t run. But parkrun got me out of the house. When I had depression, I did not leave the house on the weekend. So this was a reason for me to get up and get out. I got to know people there,” she said. 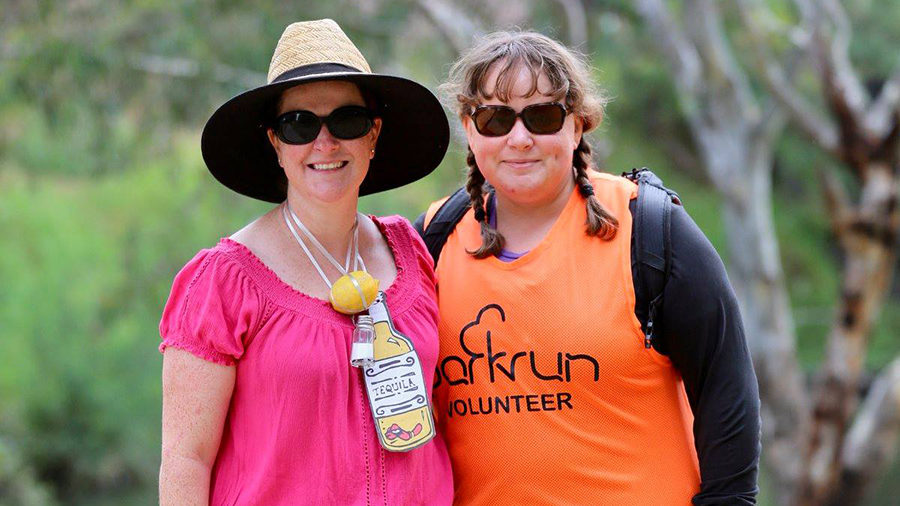 At one stage during her injury, Sarah volunteered 93 times. “I wanted to try run directing to push myself a bit more. It did generate more anxiety for me. You can not have an anxiety disorder and still be very anxious being a Run Director. I remember my hands shaking as I was holding the clipboard with the run brief on it, but it got easier,” she said.

Sarah said for her, volunteering had helped her more with her anxiety than running had. “You can show up, you can run, but if you’re by yourself you get your token scanned and you go home but when you’re volunteering you actually have to interact with people and get to know people and that really does help. Knowing that someone is expecting you to show up also helps,” she said.

Like countless other parkrunners, both those who suffer from anxiety and those who don’t, Sarah said parkrun had undoubtedly changed her life.

“It is hard to quantify. But it has been a safe place to push myself out of my comfort zone, in a good way,” she said. And Tim Oberg, said he agreed. “I’m so proud of everyone who shares their stories about struggles with mental health. It takes courage to put yourself out there in this way however I know from personal experience that talking openly is therapy in itself. And it’s wonderful that the parkrun community is perceived as a safe place where people can do this without fear of judgement,” he said.

Nikki Foster and Colin Ward had been unlucky in love, with a string of bad online dates behind them. While Nikki joined parkrun in January 2016 and Colin a few months later in June, they had never met there and wouldn’t meet in person until the following year.    Ready to give up online dating,…