Vicky Calver went from hating running and exercise, to completing 100 parkruns and multiple marathons. Not only that, as a parkrun Event Director she also helped inspire a community to walk, jog run and volunteer.

Vicky tells us how what started out as a friendly challenge, ended up changing her life, and the lives of those around her…

It all started at a charity ball in October 2012 – a friend mentioned to me that I could run the Colchester Half Marathon, and the idea began to drip-feed its way into my head. A small group of us were going to run it for charity, running the whole race together. The idea was laughable!

I was 35, hated running and hated exercise. I was slightly overweight, suffered with a bad back, and had arthritis in both my knees. But the seed had been planted…

I ended up being the only one out of that “group” who ended up running that half marathon, and when I look back at all I have achieved and how much I have changed as a person, it beggars belief.

Just before the Colchester Half Marathon, my dad was diagnosed with Pancreatic Cancer and he was so proud of me for doing it that I was inspired to sign up for another one before I had even done the first one, just to keep the motivation up.

He kept telling me to join the local running club, but I thought only elite type runners joined them. In time, I found myself there and discovered parkrun through friends I had made from Colchester. I discovered my closest parkrun at the time was Gunpowder in Waltham Abbey so I signed up and off I went at the end of April 2013 to do my first ever parkrun. I loved it and never really looked back!

Two months later, my dad sadly passed away. I didn’t go to parkrun for a while as I had too much else going on. Then in 2014, I found out there was an opportunity to start a parkun in Harlow and I was keen to pay it forward – the support and encouragement I had received during that first year or so of me running.

I wanted to show others that it didn’t matter how old you are to start running, what size you are, how much you weigh, what you look like, where you come from or what you had been through in life – no one was going to judge you. I ended up becoming the Event Director! 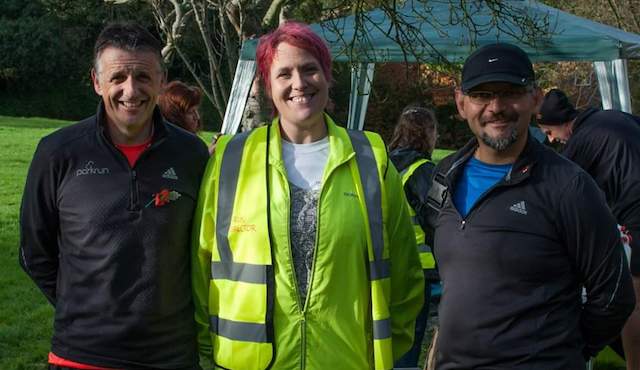 At our first event with my then-ambassador, Gerry McGovern, and my mentor Len Marten.

It wasn’t always an easy ride, but it was so worth it and I watched people grow in confidence, grow in ability, and most of all, I watched the community grow. Strangers whose paths would never normally cross were becoming pals, people were bringing more and more family along. I loved to see it – it made me so proud.

In becoming Event Director, it meant the number of times I run massively reduced as volunteering took over, and I actually preferred to volunteer than run – I was always too tired to chat and run at the same time, so felt I couldn’t engage with the community I was trying to build.

After three years I wanted to pursue some of my own dreams, but that meant I couldn’t dedicate the time I wanted to parkrun, so it was with a heavy heart, I stood down as Event Director and handed it over to two of my fabulous Run Directors to co-ED. I still do my turn as Run Director and it still feels good to be there, but I wanted to inspire people all over again, so wondered how I could do that…

Eventually, I decided to run 12 marathons in 12 months, which actually took just shire of nine months to complete. I wanted to show that even me, the least “natural built runner” you could possibly meet, can achieve anything you set your mind too.

In June this year, I run 100k over 3 days followed by five races in five days at the end of June, where I covered 102 miles – just to prove that anything is possible with the right determination and support. 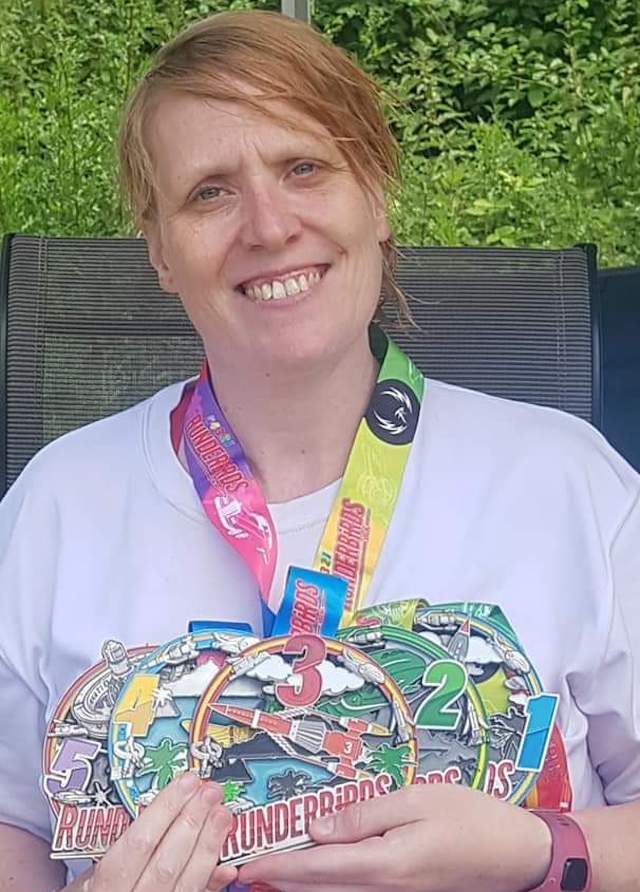 I see so many people who started out at parkrun now running half marathons, marathons, ultra-marathons, OCR’s and even aquathons, triathlons etc etc etc.

I know I did not play a direct part in many of these people’s journeys, but I also know of people who look at me and believe if I can do it, so can they, and that makes me proud and quite honestly, quite honoured to be able to do it.

To be able to mark my 100th parkrun and 200th volunteer stint on the same day, at the parkrun I was Event Director at, and it having taken me six years, three months to get there, and to do it amongst friends, old and new, was really quite special.

I am proud to be part of the parkrun family, thank you for having me.