A few months back, all Vicki Jensen wanted to do was complete one parkrun. With a degenerative lung condition, 50kg to lose and hopes fading to be considered for a lung transplant, she knew it would be a tough ask.

So the 61-year-old South Australian decided to do something to rapidly improve her chances of not only getting new lungs but a new lease on life – she printed her barcode and set off for her first parkun.

“My daughter Richelle and her family do West Beach parkrun and have done since it started and I always said I’d love to do one,” Vicki said. “I was very obese, had breathing problems and I wasn’t going anywhere. I had to lose about 50kg, I’ve lost about 25kg so far, so I said I would do one.”

On the first Saturday in October this year, Vicki walked Largs Bay parkrun in South Australia in a time of one hour and 17 minutes, made all the more difficult by wheeling her 28kg oxygen tank on a trolley behind her.

She was worried it might take her more than two hours, but with Richelle’s encouragement and a reminder that the volunteer tail walker would always come in behind her, Vicki completed the 5km with a huge support crew with her every step of the way.

“I had friends and my husband walk with me. I had a huge crowd and girlfriend Karen with her son who is severely autistic so we had a really good group. Karen and I both said how much we liked it and that we wanted to go back the next week, now we’ve been doing it pretty much every week since,” Vicki said.

Vicki was diagnosed with interstitial lung disease 11 years ago and 15 months ago, was put on oxygen. Up until recently, she found simple tasks like holding a conversation difficult, often getting out of breath, but with parkrun, her health has been improving. She’s working towards hopefully getting a lung transplant, but her caregivers have stressed she needs to be fitter to be considered a safe recipient.

Without a transplant, Vicki said her condition would continue to worsen, with doctors once telling her she had one of the “worst diseases a person could get”. She said the issues with her lungs had also put stress on her heart, but that by getting fitter, she was giving herself the best possible chance of living a longer life.

In December last year, Vicki had to stop work and her doctors were worried about her deteriorating health. Now, with a renewed lease on life and regular weekly walks outside of parkrun, she’s looking to start working again in February next year.

Before attending her first parkrun, Vicki practiced so she would feel ready for the challenge on the day. She walked along the beach near her house, starting out with one kilometre then building up to do more. Soon enough, she felt ready to take on parkrun. “Now I’m up on a Saturday and out the door and I think to myself, who is this woman,” Vicki said.

Having only missed one parkrun since starting, Vicki now has a new personal best of one hour and seven minutes – something she’s incredibly proud of. She now carries a smaller oxygen bottle in a backpack, making things a bit more manageable.

She was told the cut-off point for a lung transplant was 65, but that if she maintains a good level of fitness, she may be considered after 65, all being well. “I’m under the care of a respiratory physio and I showed her the photo of me finishing parkrun she screamed with delight because she said it’s just the best thing for me,” Vicki said.

“It is getting easier too, I even ran six strides through the finish line last week – I never thought I’d be able to do that.” Vicki said as well as improving her health and achieving what she once would have considered impossible goals, she also loved the support she was getting from others. 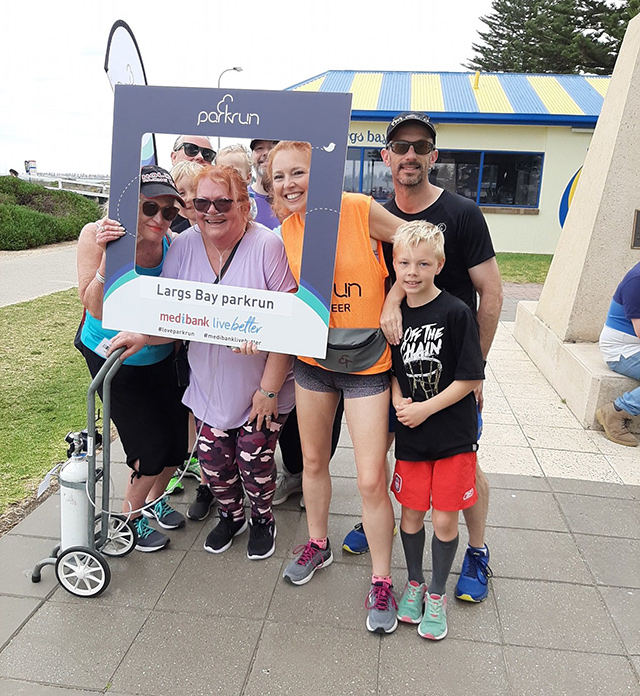 “I’ve made amazing connections. Everyone cheers for me and Karen. One week, one lady – another bigger lady – gave me a high five and she said, ‘we’re reaching goals Vicki,’ and that to me was one of the most wonderful moments as she’s reaching her goals too,” Vicki said.

“Everyone cheers and everyone is welcoming.”

Vicki said she had some parkrun tourism goals in her sights now, including joining her family at West Beach parkrun, and hitting a milestone of 10 parkruns. She’s also been spruiking the benefits of parkrun to her brother in America and friends in her physio class.

“I could honestly recommend parkrun to anyone. It’s working In my favour as the fitter I can get, the more acceptable a risk I’ll be for a transplant. Then after I have a transplant, I have to keep the exercise up, so there are so many benefits,” Vicki said.

“I walk parkrun with an oxygen tank, so if I can do it, anyone can do it.” 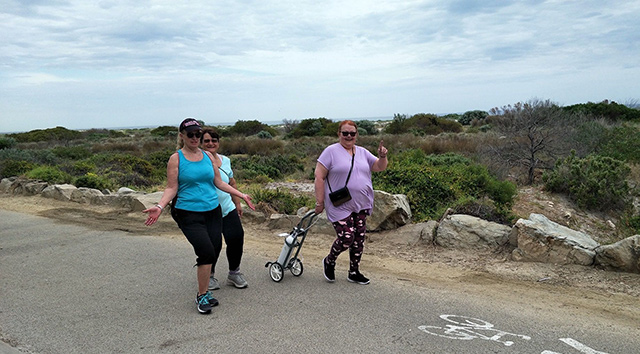