If there’s one thing many parkrunners have in common, it’s celebrating a milestone.  However Fingal Bay parkrunner and Port Stephens great grandmother Colleen O’Shea doesn’t want a fuss this weekend, despite the fact she will complete her 250th parkrun.

What makes Colleen’s story all the more remarkable is she’s 90 and will be the oldest person in parkrun history to reach the milestone.

When asked about the significance of her achievement, Colleen was quick to downplay things, saying she was “ just an ordinary person doing ordinary things”.

Colleen, who took up running at the age of 68, found parkrun in 2013 and has been a regular ever since, only missing a few weeks when she was sidelined with a broken wrist.

The mother of seven, grandmother of 11 and great grandmother of five said parkrun had been a great way for her to stay fit and make friends. “I’ve had some wonderful support from parkrun, it’s a great group and it’s taken me a while to get here, but I have persevered and stuck with it,” she said.

At Fingal Bay this Saturday, where Colleen has clocked up 241 of her 249 parkruns, she will be joined by 11 members of her keen parkrunning family, including son Kevin who will also notch up 250 parkruns on the day. Between them, they have completed 2074 parkruns, have volunteered more than 330 times and have a combined age of 569 years – with only two of them being aged under 50 – proving age really is no barrier.

Colleen has a parkrun PB of 40.12 but has slowed with time. She hopes to get around the course on Saturday in about 50 minutes and said she wouldn’t let anything stop her, including inclement weather. “I hope I can make my aim of getting it done within 50 minutes. I’ve slowed down a bit over the years which is to be expected. I hope the weather will be favourable but I have a feeling on Saturday, rain or shine, it will be on for one and all.”

Colleen said beyond Saturday, her next goal was to do some more volunteering. “I haven’t done much volunteering leading up to this, so that’s my goal after Saturday. I’ve been wanting to do it each week to get to 250 as soon as possible as I had no idea how much time I had left,” she said. 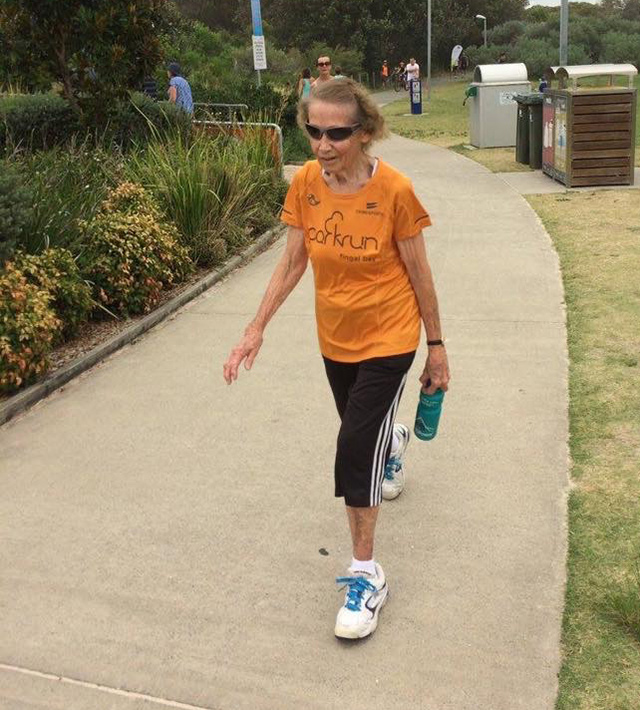 No stranger to breaking parkrun records, in 2016, Colleen was also the oldest woman in the world to reach 100 parkruns. Along with her outstanding parkrun record, she’s also participated in several City2Surf fun runs in Sydney and competed in Masters Games both here and in New Zealand.

While Colleen doesn’t want a fuss, son Kevin said he was incredibly emotional thinking about his mum’s impressive feat. “I’m quite emotional really. There she is, plodding along every week and inspiring lots and lots of people but she feels she’s an ordinary person doing ordinary things – nothing special,” Kevin said.

Colleen’s husband John died two years ago, and while he never did a parkrun himself, he was a huge support to Colleen. “He was the most attended parkrun person not to have done one. He drove mum down every week and watched and had breakfast,” Kevin said.

While Kevin said they would stick to their own paces on Saturday, he would go back on the course to cross the finish line with his mum.

He said while Colleen’s record-breaking parkrun on Saturday would be just “another person doing another parkrun,” it would be more special and unique.