When finish tokens were handed out at Kangaroo Island parkrun on Saturday, many of the participants stood up very straight and fell in line.

Kangaroo Island, off the coast of South Australia, was severely impacted by the bush fires in January – with profound loss of natural landscapes, homes, animals and tragically, human life. Last Saturday, a huge contingent from the Australian Army visited Kangaroo Island parkrun, while on the island assisting with bushfire recovery work.

Event director Tessa Shalay said for an event that averages 14 participants, it was a sight to behold with so many defence force men and women – in their army issue sports gear – charging off from the finish line and completing the course in some impressive times. They set a new attendance record of 158 and up to 140 of them were defence forces members.

For those who didn’t run or walk, they slipped on a high vis vest and helped fill volunteer roles, with more than usual required to assist with the big turn out.

“The thing that brought the biggest smile to my face was at the finish line. The guy handing out tokens was clearly someone highly ranked. As they were coming across the finish line they’d all stand up straight and say thank you sir!” Tessa said. 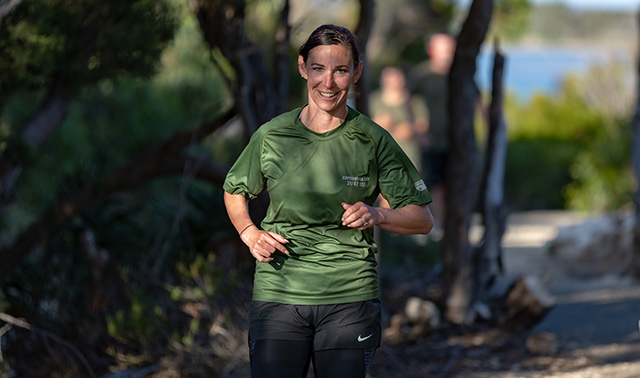 Kangaroo Island parkrun launched in October 2017. For the event team and locals, January 2020 will be a time they will never forget. “We only had to cancel that one week – January 4 – but that was the day the entire island was under watch and act,” Tessa said.

Tessa said when she arrived to set up the course at 7.30am last Saturday, it was brimming with activity with many defence force members already there – eager to help in any way. “Sport and recreation has been a huge focus on the island since the fires as a few big sports clubs totally burn out, getting them back up and running has been important and parkrun has been part of that,” Tessa said.

Tessa said while some of the army personnel knew about parkrun, it was a new concept for most. She said while many didn’t have time to register or get barcodes, most were keen to sign up and come back again while the recovery work continues, or look up their local parkruns around Australia once they get home.

Lieutenant Colonel Phil Cox – Commanding Officer 9 Emergency Support Force, Kangaroo Island said when they heard about parkrun on the island, they wanted to get involved. “Everyone had a great time. The scenery along the Kangaroo Island parkrun course is amazing. Beautiful coastline beside the path and the Australian mainland in the distance. Amazing! I would highly recommend Kangaroo Island as a must do parkrun,” he said.

Lieutenant Colonel Cox said he expected some of the members would continue their parkrun endeavours once back home. He said the option was there for all members to attend again this Saturday. “I’ll be there for sure,” he said.

Defence forces were deployed to Kangaroo Island on January 6 and recovery work is ongoing.

“The Kangaroo Island community has been so welcoming and hospitable to us during our time here. It has been our honour to help the community,”  Lieutenant Colonel Cox said.

The gift of helping others

parkrun Ireland Country Manager Matt Shields tells us how your #parkrunresolution can be the gift of helping others.   I began running at 11 years old when I went to secondary school. Being small in height, and lacking the ball-handling skills for other school sports it was great to find an activity in which I…