Main Beach parkrunner Lisa Sheldon is the first to admit she likes to have a bit of fun on a Friday night and sometimes, getting up on a Saturday can be a chore. One Saturday earlier this year, a sleep in beckoned. Had she made it out of bed that day, she might not have found herself stranded on 249 parkruns before the global parkrun suspension.

Lisa started parkrunning in 2012 and while she spends a lot of time overseas and not always close to a parkrun course, she rarely misses a Saturday. A walker rather than a runner, she’s done 234 parkruns at Main Beach and has visited events in Canada, Singapore, Melbourne and other sunny spots around Queensland.

While her green 250 shirt now painfully eludes her, she’s a proud owner of the volunteer 25 shirt, having helped out 27 times – mostly a tail walker as she said she’s always walking the course anyway. “I’m pretty consistent, rain hail or shine,” Lisa said. 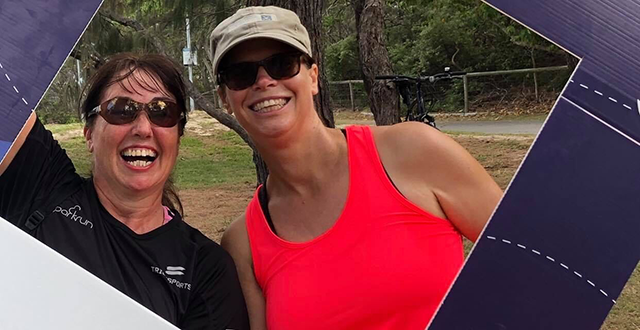 At the final parkrun before the coronavirus pause on March 14, Lisa had her barcode scanned for the 249th time but the wheels were already in motion for a bit of party the following week. “We’d organised five 50 balloons. I do parkrun with three girlfriends and we’d also planned to go to the local Thai place for lunch, which we still did, just without the balloons,” Lisa said.

Lisa said she had somewhat of a heads up on what was to come in terms of the pandemic, as she flew back into Australia in early February after doing a cruise through Asia. She said there were many in airports wearing face masks and the ship was not stopping to pick up passengers in some ports as planned. “We didn’t really know how bad it was though, but then the world just went crazy,” she said.

Lisa said during the lockdown period, she’d kept up her physical activity by still walking with a friend. “We don’t go to the parkrun course as we don’t want to do that, but we still do 7am to keep the 7am ritual alive which is getting harder and harder, because life has just not been normal. Why get up early as I just have to fill all these hours in the day. Thank goodness for so many good TV shows to binge on,” she said.

While her ritual of her weekly walk has remained, she said she missed the great community feel of parkrun. “I miss all the people going past and getting to see everyone on the course,” Lisa said.

When parkrun returns, Lisa said she was looking forward to a double celebration – having parkrun back but also ticking off her 250 milestone. “We might have to have some canons, confetti, a huge banner and a big band,” Lisa joked.

“It was really sad not to get to 250 before we stopped, but it will be more special to do it on the day we go back. It will always be something to remember.”