Event Ambassador Bronwyn Bell supported Melaleuca Women’s Prison in Western Australia to introduce parkrun to their facility. Bronwyn explains the considerations that remand centres must work through during the development of parkrun and recounts her experience of their launch event.

Attending a parkrun launch is surreal when much of the parkrun world is in a COVID-19-enforced hiatus. But the Melaleuca parkrun launch was something even more special as not only was it just the second remand facility anywhere in the world to hold a parkrun, but its launch also broke two parkrun prison attendance records!

parkrun as a weekly activity inside a correctional facility is becoming more common with parkruns now operating in 38 such facilities around the world. Melaleuca Women’s Prison in Perth became the 10th prison to join the parkrun family with their successful event launch on Saturday 19 December 2020.

WA’s Department of Justice had been planning a Melaleuca parkrun for some time having established successful events in 2019 at both Wandoo Rehabilitation prison (a women’s facility) and Banksia Hill Juvenile Detention Centre.

The women at Melaleuca transfer periodically between different facilities in WA, so having multiple prisons hosting parkruns provides the opportunity for women to maintain their parkrun connectivity from remand through to rehabilitation with the aim of continuing parkrun in the wider community upon release.

Up to 250 women can be at Melaleuca however, as a remand (rather than a long-term detention) facility, numbers vary with people passing in and out of the facility in any given week.

Fortunately I was invited to support Melaleuca as their parkrun ambassador and, having supported several other community parkruns in Perth with their launches. I was lucky enough to also participate in Melaleuca’s first event.

parkruns in correctional facilities are much like parkruns in the community but with a few quirks and modifications.

A key difference is that some events have lots of laps! In the original planning for Melaleuca, it looked like 15 laps would be necessary but some creative looping of the available open space resulted in a 500 metre loop, reducing the number of laps to just 10 – a nice round number and much easier to count. Also, it meant participants who were still building up to a 5km walk or run could more easily calculate the distance covered each week and monitor their progress towards 5km.

Having so many laps also requires a method for counting them. Based on the experiences of some other correctional facilities, Melaleuca decided to use elastic bands for counting so every participant is given 10 elastic bands at the start and they have to give one back to an elastic band collector volunteer for each lap they complete.

Another key difference is that electronic devices including phones and GPS watches are strictly prohibited in correctional centres. I’m sure most of you will have heard the saying “if it’s not on Strava, did it really happen?” – well for parkrun in these locations – yes! As nothing is on Strava it’s all down to the parkrun results on the website instead. Of course there’s also no social media channels either. However, volunteer rosters, event reports and photos can be printed and posted on internal noticeboards for the women to see.

Unlike in the community, the women can’t just jump online and register and print their own barcode. Administration is centrally coordinated by the officers at Melaleuca, which is quite a feat to register and print 200+ different barcodes. This is quite a challenge for a remand facility such as Melaleuca that has people moving in and out of the facility each week – just one more of the considerations Melaleuca had to work through before its launch.

As with all parkruns, new events hold trial events which allow them to improve their set up and practice volunteer roles. Melaleuca held three trials, which meant several opportunities to get used to the setup process and a good opportunity to start spreading the word amongst the women that parkrun would soon be a weekly recreational activity on offer.

Like other parkruns they spread the word to potential participants to encourage interest through posters and flyers and talked about the benefits of parkrun to help get people excited about the launch. They got sent their parkrun flags and other necessary equipment by parkrun HQ and planned for a few celebratory moments to mark their launch – in this case, a CD of 80s hits played over the loud speakers and Gatorade for all participants!

As Wandoo parkrun was already up and running nearby as a women’s correctional parkrun, Melaleuca benefited from their experience. This meant supporting them as a parkrun ambassador was relatively straightforward and before too long, the three trials were complete, the women all had barcodes and launch day was here!

Due to operational scheduling, Melaleuca’s parkrun can’t start at the normal WA time of 8am but instead starts at the later (and hotter!) time of 9am. To get through all the security requirements and be available to support the prison team with setup still required an 8am start on site for the officers and myself though, so I wasn’t allowed a sleep in!

Most of the setup was done by women on remand with those same women being the key volunteers for the day – timekeeper, finish tokens, barcode scanner plus two who filled the bespoke roles of elastic band collectors (lap counters). These same volunteers had taken on those roles during the trial parkruns so were becoming quite familiar with the roles. 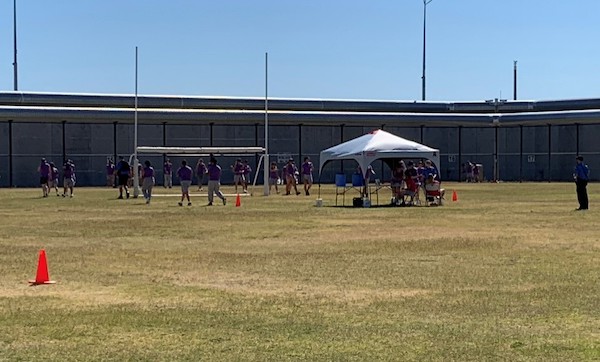 Just like parkruns in the community, there was a brief from the Run Director and plenty of cheers to mark being only the second remand facility in the world to host a parkrun. 3, 2, 1 go! Not that we knew it at the time but we were on our way to setting two new parkrun records.

As the Melaleuca course is multi-lap in a fairly small area, the recreation team set up loud speakers near the start line to play music (Greatest Hits of the 80s) to keep everyone entertained during their 10 laps. At around lap two, one of the volunteers then decided to do impromptu karaoke using the microphone throughout the rest of the parkrun (which you could hear on the other side of the oval!) – much to the amusement and entertainment of all the other participants.

I was walking towards the back of the group so got to chat to a few other walkers during the 10 laps. It is a bit strange walking round and round in circles to do a parkrun but one of the good things about the parkrun model is it is simple and can adapt to the circumstances – such as having 10 laps due to space restrictions. Although that initially seemed quite strange to me and I feared it would be boring, chatting away to people really made the time fly.

Walking on a 10 lap course also means you do get lapped several times by the faster participants so the elastic bands really are necessary as it is quite difficult to work out which lap people are up to and hence which crossing of the finish line was actually someone’s finishing lap. This makes the timekeeper and finish tokens roles a little different from parkrun in the wider community as they must check who was actually finishing when they crossed the finish line. 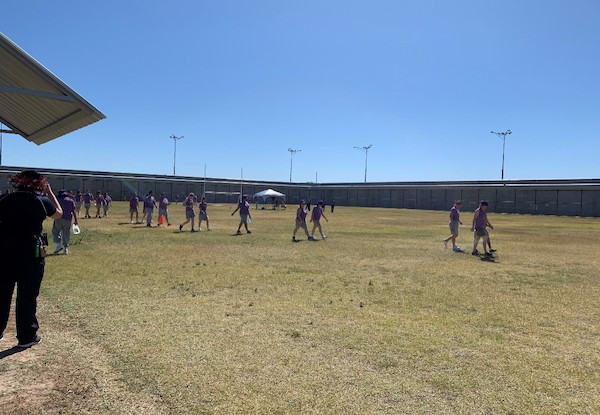 A few of the officers even did a few laps and one in particular became known as Cheer Squad Member Number 1 as he kept cheering all the participants on with such enthusiasm.

The Melaleuca launch left just one parkrun record standing – the largest attendance ever at a parkrun in a correctional facility. Could this be a record for Melaleua to strive for in coming weeks? Regardless of how big the numbers grow however, the impact of parkrun at Melaleuca is already being felt and will continue to increase week after week.

While many people were excited for the return of parkrun in Melbourne, one parkrunner was ready to take the course at Albert Melbourne parkrun by storm!   Claudia Stevenson ran her 49th parkrun at Newport Lakes on the 14th of March, 2020 – the last parkrun in Melbourne before the lockdown began. She ran with…