83-year-old Noel Darr is a Vietnam Veteran and retired load-master who served in the Royal Australian Air Force. When Noel retired in 1994 he held the world record for the number of hours flown on the Hercules E Model and was awarded the Order of Australia medal for services to the military.

On Saturday Noel was recognised by the East Richmond parkrun community for volunteering on 100 occasions, and not even the rain could dampen the celebrations.

I was born in Toowoomba in 1937 and grew up in a little town called Allora in the Southern Downs region of Queensland. Despite a population of only around a thousand people, it’s also the birthplace of Australian rugby league coach Wayne Bennett, Australian netball captain Laura Geitz and Australian rugby union player Greg Holmes.

When I was 20 I joined the Royal Australian Air Force and spent two years in Melbourne before being transferred to Richmond at the foot of the Blue Mountains, where I’ve lived ever since. It’s a semi-rural area with lots of walkers, runners, cyclists and a few golf courses!

I was a load-master in the RAAF with the 37th Squadron who flew 49 missions to Vietnam between 1968 and 1972. By the time I retired in 1994 I held the world record for the number of hours flown on the Hercules E Model.

Following my retirement from the RAAF I was diagnosed with prostate cancer and underwent surgery the following year. When I’d recovered, a friend of mine got me involved in volunteering. I ended up helping out at The University of Western Sydney (now known as Western Sydney University) for 14 years and also at the Wayside Chapel, which supports people in Sydney’s eastern suburbs who experience homelessness and social isolation by providing a safe space and essentials such as showers and clothing.

Then in 2017 I read an advertisement calling for volunteers in our local monthly magazine, the Hawkesbury Independent. It was for something called ‘parkrun’ that was coming to East Richmond. I’d never heard of parkrun but I was keen to help out, so I got in touch with Alison Dunning who was the contact person and I volunteered at the two tests events that were held on consecutive Sundays in October. We were then greeted with 400 people at the launch the following month! At that time I was walking and playing golf regularly, but parkrun gave me the chance to meet lots of people and make new friends.

When I was in my forties and fifties I’d taken part in some fun runs and even completed the Honolulu Marathon, but I had never seen anything like parkrun. People of all shapes and sizes, families, and parents pushing their young ones in prams is really incredible to watch. 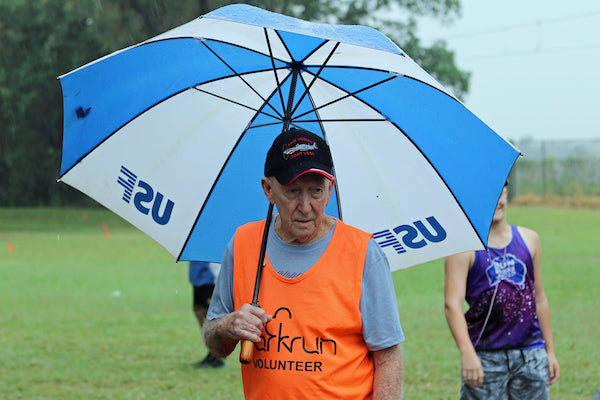 Pretty much every Saturday since East Richmond parkrun started I have volunteered, either as Tail Walker, Scanner or Course Marshal. I also help the Run Director mark out the course beforehand and help out in the car park. It’s great to be a smiling face for people as they arrive, especially those who are new to parkrun and aren’t quite sure what to expect. More recently, I also encourage people to check in using the QR code.

During the event I love cheering people on, encouraging them and seeing their improvements over time. People walk up to me and thank me for helping out too.

After parkrun a group of us go into Richmond for a coffee and a chat, which usually lasts for about an hour and a half!

The social side of parkrun was a lifeline for me when parkrun was paused for nine months during the COVID-19 pandemic. I live alone but I would regularly meet up with a group of people from parkrun and we would get a takeaway coffee and go for a walk and a chat. Some people would go running and then join us afterwards. Some of the people I’ve met through parkrun have become close friends – they invite me to their birthday parties and help me out at home with things I can no longer do. 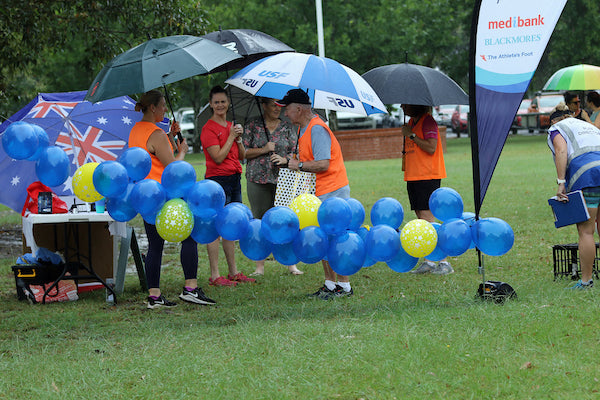 The celebrations that the parkrun community organised for my 100th day of volunteering just blew me away. They organised in advance for the local newspaper to interview me and take some photos and the story was published a couple of days before the event. Despite the rain on the day we had a great turnout too. People came up to me and thanked me and there were some lovely comments on Facebook. I was really humbled by the whole experience and it was a great feeling.

For anyone thinking about coming to parkrun, I would encourage them to come along and just enjoy the socialising and atmosphere. It’s a great mix of people and there’s always someone to have a conversation with. I particularly enjoy that there are people of all ages and often I’m volunteering alongside young people who are still at school.

This weekend I’ll be going away so my plan is to walk at Fingal Bay parkrun on the NSW central coast. Then I’ll be back to volunteering at East Richmond, although 200 weeks of volunteering does seem a long way off!

Still, if there’s one thing I’ve learnt getting older, it’s the importance of keeping moving. I’ve had a pacemaker installed but it won’t slow me down!

Making a change for me

My name is Christine and I ran/walked my first parkrun in 2017 in the early days of Bundaberg parkrun.   After I had my two children I found it really tough getting back into anything that fitted into the ‘mum routine’. Lack of activity and just general social involvement was starting to impact on my…

Say hello to the person next to you

My name is Rachel and I live in Western Australia. I started running in early 2012, at the age of 43, as it seemed like a good activity to assist with weight loss.   As someone with severe hearing loss, it can be quite daunting joining in community events, especially organised things that you haven’t…