A journey to discovery

Leanne Evans ran/walked her first parkrun in 2012, 18 months after having heart surgery to repair a faulty valve. She was 42.

With the initial aim of building up to running 5km, Leanne has gone on to start a new parkrun, run numerous marathons and is about to run her first 100km ultra marathon at the age of 50.

While pregnant with our third child my GP picked up a heart murmur, which at the time we passed off as benign. Fast forward 10 years and my cardiologist began to discuss the potential of a heart valve replacement as my condition was degenerative. At age 39 I finally agreed to a heart valve replacement. Thankfully I had a skilled surgeon who was able to repair my faulty valve, therefore a replacement was not required.

Prior to my surgery I asked the surgeon about physical activity post surgery. He indicated running was an excellent way to maintain heart health and mentioned he had a patient who had undergone the surgery I was about to have who was running marathons. So, the seed was sown!

Six months after surgery I returned to the gym. I found this very confronting due to my weight and poor fitness. I chose a small local gym with a focus on women’s health. Slowly I regained fitness, confidence and began to lose weight.

A year later I began to run very short distances with my husband and a friend from the gym. We would walk, then run to a tree or post 30 or 40 metres down the path, then walk again. I still recall the elation I felt when I ran 1km without stopping! Our ‘running’ was very sporadic and we had built up to 2 – 3km non-stop when I heard about a local 6.4km charity fun run.I decided this fun run was my goal, and figured I had to build up to running 5km non-stop before I could enter.

Around this time (December 2012) Launceston parkrun had recently commenced. My husband found some information and we decided to go along. Our first parkrun was Launceston parkrun’s event no 4, and there were around 50 participants.

I was very nervous and would only go if my husband came along too! I really did not know what to expect and figured I’ll just leave before it starts if it was too intimidating or there were too many fit people. I was still very self-conscious. On arrival we were greeted by an enthusiastic Event Director/Run Director who made us feel comfortable and as if we belonged. Before I knew it, we were off and running! Soon after the start I had to slow down and walk a bit. People around me were so supportive and encouraging, I began running again and before I knew it there were the finish flags. 5km done! The support and encouragement from everyone made me feel right at home. We had earlier decided not to go to coffee, thinking we would quietly leave after completing the 5km, but we were swept up with a great group and found ourselves at the post-parkrun coffee.

It was several weeks before we returned as I worked three out of four Saturdays. After several sporadic attendances followed by coffee each time, I began to request Saturday mornings off. Before long we were regulars at parkrun. We loved the sense of community and the challenge of running 5km every week. We did not run any other time; therefore parkrun provided a sense of discipline.

The ED at that time is also a coach of a small running group, many of whom we had met at coffee post parkrun. We joined his running group several weeks after commencing parkrun to build our running abilities. My goal was still the 6.4km event, I had no intention of running longer distances. Friendships grew as our love of parkrun and the local running community.

The first time I volunteered was because the Event Director, who was now my coach, was short of volunteers one week. I offered, but only as a marshal because I figured it was an easy role which did not require much from me. I then began to volunteer on a regular basis, initially only as a marshal, but eventually tried other roles which were nowhere near as hard or intimidating as I had imagined them to be.

In 2015 the ED was looking to expand his team of RDs and I offered to step up. I was soon welcomed aboard the core team. I really enjoyed the behind the scenes aspect of the role, but really struggled with the Pre Event Welcome. Yet I continued to volunteer as RD and in other roles regularly. parkrun had become part of our Saturday morning routine. So much so that if ever away on a Saturday we would find a parkrun, even if it meant travel. I even stepped up to regularly RD at a small event an hour away as they required help. 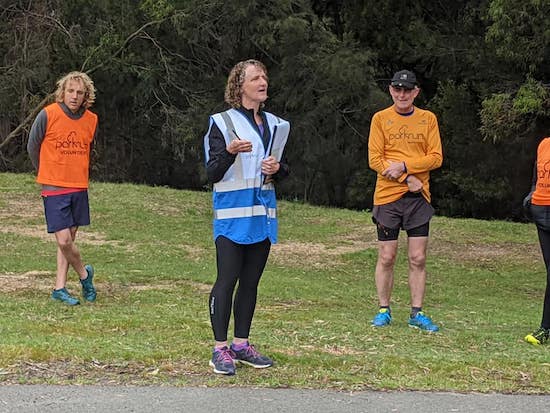 Launceston parkrun was beginning to grow and there became a need to start a second parkrun. I had a vague idea about finding a suitable 5km route and starting a new parkrun, but it was only ever an idea which did not eventuate. A second parkrun did start in Launceston, so I put my ideas to rest. So I thought…

I had developed a love of trail running and live near some amazing trails. I started to think how good it would be to have a parkrun utilising the trails I regularly run on. I began to verbalise my thoughts to a few trail running friends and was encouraged to investigate the possibility. I played around with the idea for several months before seriously looking for a potential 5km route and making it happen. Our initial route was not approved by Tasmania Parks and Wildlife but they were keen to assist. Kate Reed parkrun was born! We were due to launch the weekend parkrun events were closed due to COVID, this put us on hold until October 2020.

I am the Event Director at Kate Reed parkrun, which is still a relatively new event with an enthusiastic core volunteer team. Tasmanian parkruns commence at 9am. Often my Saturday morning will begin with an easy jog at 7:45am around the Kate Reed course to check for hazards and place cones. This is followed by set up, assisting the RD, or chatting to volunteers to ensure everyone is comfortable with their roles. Before 9am I may be seen taking a few photos, supporting the RD, chatting to newcomers, ensuring people have checked in or just generally milling around to assist if required. I may even squeeze in a short warm up run if planning to run. Come 9am I’ll either run or assist at the start/finish line.

Following completion, I am generally one of the last to leave as I assist volunteers as required, chat to people as they finish and help pack up and ensure the RD for the following week is sorted. We then head to our local for coffee and results processing.

parkrun introduced me to the local running community and with it many friendships have been developed. I have made numerous friends through parkrun touristing, both with visitors to Launceston or by visiting other events. I have become more confident in group situations and public speaking, to the point where I have no trouble doing the pre run brief, where previously I would dread it every time I was rostered. Setting up a new parkrun required the development of management skills and the ability to liaise with key stakeholders, something I had always avoided. It aided my self-confidence and developed leadership and managerial skills. 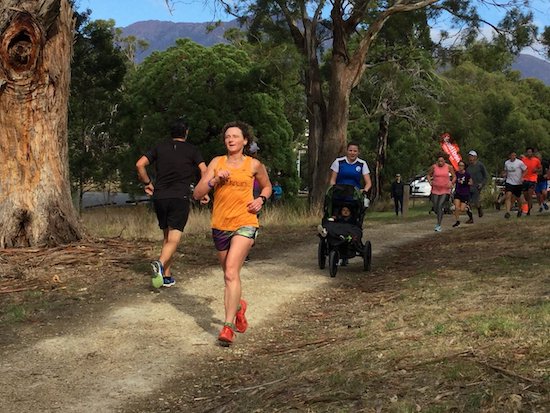 My run journey commenced with parkrun. I have no doubt that my love for running and the running community as a whole was developed through my engagement in parkrun. Some of my closest friends I met through parkrun.

parkrun is inclusive, it is for everyone, from someone attempting their first 5km walk to the fittest 5km runner. Young and old. My five year old granddaughter loves to attend parkrun with me. She runs/walks/skips and explores but completes the 5km. Sometimes it takes us more than an hour, but there is never any pressure to hurry up or finish.

If a shy introvert like me can join the parkrun community and thrive so can you. I still remember the first time I went, almost hiding behind my husband thinking I do not belong. This feeling only lasted as long as it took me to walk to the meeting area. parkrun is not just a 5km run/walk it is an inclusive community and a journey to discovery.