Starting on a positive note

Like many, Gagan Dhingra was nervous about going to his first parkrun. He discovered parkrun about three years ago while out on a walk.

“One morning I was walking at Lochiel park and I saw a lot of runners and walkers and parkrun flags. I wasn’t sure what it was all about so I searched online when I went home. The following week, I went on my own to my very first parkrun.”

Gagan was nervous at first but he found the Lochiel parkrun community warm and welcoming. He was going through some personal difficulties at the time and found parkrun helped him dispel his negative feelings from the week.

“Participating in parkrun is a great way to start off the weekend on a positive note and I wanted to share that with my loved ones.”

Attending parkrun became easier when Gagan’s wife, Hargun, started attending a few months later as he didn’t have to try to sneak out of bed quietly on Saturday mornings so as not to disturb her. 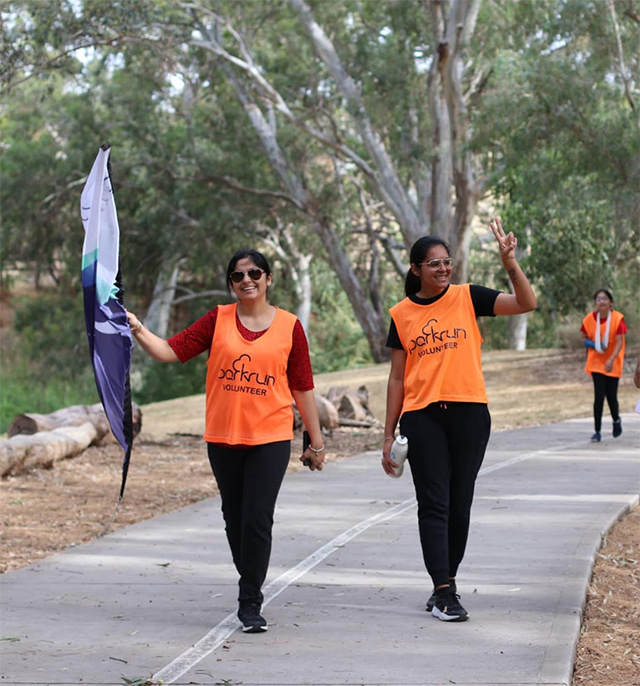 Hargun didn’t finish the entire 5kms the first time she went, but it didn’t matter. Their son Prab was under two years old and pushing him in the pram was challenging.

However, the second time she attended she finished in under an hour. She tries to improve her time every week and she is hoping to finish in under 40 minutes soon.

Despite being shy initially, Gagan and Hargun said the Lochiel parkrun community was welcoming and encouraging.

“It’s not just about the run but it’s also about the chats afterwards. We now know quite a few people at parkrun and have introduced others to it.”

Their children Gulnaaz and Prab have participated in both the 5km parkrun and 2km junior parkrun event as well as volunteering. Prab enjoys junior parkrun more than the 5km events and enjoys taking turns with his friends deciding who out of the group will finish first.

Gulnaaz likes participating in both distances. She loves barcode scanning and seeing the excitement of parkrunners as they come to get their tokens scanned.

Gagan and Hargun think volunteering is a fun way to get involved with parkrun.

“As photographer, everyone waves and smiles at you. As tailwalker, we can volunteer as a family and walk together,” Gagan said.

“For anyone who hasn’t tried parkrun yet, it’s a great way to start off your weekend. Since getting involved in parkrun, we feel happier and more energetic as a family and we look forward to it every Saturday.”