Using the athletes’ feats in Tokyo as inspiration, Adelaide-based parkrunner Caitlin Adams broke the parkrun global record at Lochiel parkrun in a time of 15.38. And it was one of many records to tumble.

Caitlin said it was impossible not to draw inspiration from the Australian Olympic team, particularly the women’s marathoners who were pounding the pavement at the same time.

“I hadn’t raced in a while with everything happening with COVID so it was good to get a hard and fast hit out this morning,” she said. 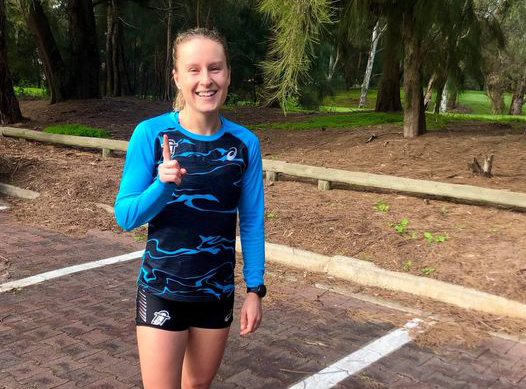 Caitlin and Jess are both coached by Adam Didyk who is in Tokyo with the Australian team. Team Tempo decided on the Lochiel hit out in a group chat earlier in the week and Adam got wind of it, he told them to “go for it”.

Caitlin has visited three different parkruns – Lochiel, Torrens in Adelaide and Queenstown parkrun in New Zealand and now holds the course record at all three. Her previous parkrun PB was 16.14 but her track PB sits at 15.29.

“I was still so stoked with the time today as the Lochiel course is a little bit undulating on the way back so it’s definitely nothing too flat or fast.”

“I didn’t look at my watch til the last kilometre. Just wanted to go on feel. A lot of the boys I run with were there so I just stuck on them so it felt really familiar as we do that every time we train.

“The first 300m was a bit of a shock to the system as we all took off so fast. But when I got going, I felt really strong. I knew with the incline on the way back it would be tough. But I had the boys there to work off. I came up along Team Tempo runner Max with 1km to go and said, let’s go!

“It was just awesome to channel the results from Tokyo into our runs,” Caitlin said.

Caitlin said she was in a better position with her 5km track times last year in terms of making national teams, but COVID ended her plans to travel overseas to train and compete. She is currently finishing her Masters in Education, which stopped her from having a great athletics season this year, she said.

“There’s such depth in women’s middle-distance running right now so I was probably just off the mark with making the team. I’ve raced against a lot of those girls and always been around the mark though. Hopefully when I finish uni and can focus on doing all the one-percenters and putting everything into my running basket, I can have a good crack at making the team.”

Caitlin said Jess ran with her phone for the warm-up so they could watch Australian women – Sinead Diver, Lisa Weightman and Ellie Pashley – compete in the marathon in Tokyo.

Jess said it was the “Tokyo effect” at Lochiel this morning.

Jess, who competed in the marathon in the London Olympics in 2012 and Rio in 2016, said it was tricky watching from the sidelines, but her sights were very much set on pulling on the green and gold in Paris in three years.

“I would love to race in Paris, that’s certainly a goal of mine, and this Olympics has just reinforced that even more.”

With her son now 20 months old, Jess said runners like Sinead Diver had given her plenty of inspiration. “She’s given so many mums the belief you can keep on building and improving.

“I would have loved to give them all a sweaty hug but instead I got to give Caitlin a sweaty hug after parkrun.”

Jess said she loved how family-friendly parkrun was. She said parkrun had made the 5km distance really relatable.

“When people see athletes running in 5000m events, parkrun means they can really relate to that. It’s such a nice distance as people of all ages can give it a go.”

Caitlin said she loved the accessibility of parkrun, too.

“I love people roll up and have a walk or run or jog on a Saturday morning. We probably looked a bit intimidating today but I think people were inspired to see us join in. Love seeing the little kids come across the line then the older generations, too. Then going to have a coffee afterwards.

“We might be training for elite competition but whenever we go to parkrun, they are some of the more memorable runs we have,” Caitlin said.

The Lochiel parkrun male record was also broken, with Issac Heyne crossing the line in 14.15, just a few seconds shy of Jude Thomas’ global parkrun record set at Kedron parkrun in June. The first 18 finishers all went sub 20 and the top 12 went sub 16.