My name is Belinda, I’m 42 and I live in Canberra with my wife, Emily, and my Jack Russell-Maltese cross, Millie.

As I type this, we are in lockdown and parkrun is on hiatus. It’s a conundrum in a sense that parkrun, for some people, is their major source of social interaction all week. Including myself. I’m a full time carer for my wife who has a disability and suffers a chronic pain condition where some days she cannot walk.

I made a decision to go from a very social full time job, to working part time, then to leaving completely to care of Emily. Hence, leaving my social needs a tad unfulfilled. This decision gave me a new appreciation of parkrun. Especially how it can bring people together, even if it’s for one hour a week. If you’re out walking, or running, seeing a familiar face and smiling or nodding can go a long way. Human connection can be this simple.

I started running when I was in my early twenties. Up until that point I had been a high achiever academically, creative, artistic, sporty and had lots of friends. It sounds like I had it all, but things weren’t as you might think.

As a teenager I discovered I had a rare condition where I was born without a uterus, meaning I could never give birth. I didn’t have the coping strategies, the understanding or the knowledge to deal with this. This was the start of my mental health struggles. I could not talk with anyone at school, even my friends, and I shut down a bit from my family too. I put most of my energies into my studies – where I developed some bad eating habits while doing all-night assignments.

I had finished school with a high score, but inside I felt empty and alone. I felt embarrassed and like I was carrying around a heavy secret. I lasted just three weeks the first time I went to uni, then tried again, this time lasting three and a half years before breaking down and pulling out. I had not developed the emotional resilience to cope with the complexity of adulthood. I was mature in a sense, but there was always a part of me that never felt good enough. This is when I first started taking an anti-depressant medication.

I wasn’t formally diagnosed with a mental health illness, but for the next few years I dabbled in a few things, including managing to go back to university and graduate, but was in a cyclic pattern of depression and anxiety for most of my twenties. I also quit a lot of things too. This involved spending huge chunks of time in bed, having very poor self care including not cleaning my teeth, binge eating and being outwardly moody to my endearing family. Basically, I felt like a complete failure, and that I could not stick to anything.

I ran very inconsistently through my twenties – aligned with my mental states at the time. When I was depressed, I let myself get more unfit, followed by periods where I’d be ‘super healthy’ – exercise, all clean eating, etc. Yep, like with poor understanding of emotional regulation, my balance, a lot of time was completely off. These kinds of changes in mood and weight can seriously do your head in! A few times, over the years I’ve thought ‘What is wrong with me?!?!’ I have thought a couple of times that I might have bipolar. I can safely say that I don’t have that – but it has been brought to my attention that I might have a form of ADHD as it runs in my genes. There is also trauma from what I went through as a teenager.

The other major thing I had to deal with was coming out as a gay woman at 28. So much anxiety and fear – even though I was very well supported by my family it was still very hard. At 30, I met my first wife and it was a good relationship, but I was still in and out of bouts of anxiety and depression. By this stage in life I was on my fourth or fifth try of anti-depressants.

I still ran and kept active in bouts, but consistency wasn’t my strong point. Each time I ran I felt free while doing it and settled after. It was an activity like no other – and in the moments I was running more, I saw familiar faces along my journey. I felt it was a team sport and an individual sport at the same time. But I still hadn’t dealt with a lot of underlying issues.

Then I discovered that alcohol helped ‘calm’ my nerves. I started needing more and more of it to ‘take the edge off’. I sometimes ran with hangovers. Part of it punishment for putting toxins in my body.

It was when my first marriage ended that I moved back to Canberra to live with my parents. There was still a lot I had not dealt with but I decided that I was going to prioritise my health and fitness. I was doing the Women’s and Girl’s 6km jog-a-long one Sunday morning – I’d done it a few times but didn’t realise they’d changed the course. The only other person in my start group, who was a little behind me, called out to me when she realised I was running the wrong way! We had a conversation at the end of the event and she asked if I’d heard of parkrun.

That was the start of something new and very exciting. I listened with open ears and eyes. I could not believe it was free, weekly and timed. I decided to sign up and show up to the Tuggeranong event. I was hooked from my first attempt. I was so impressed with myself. I never felt running came naturally to me and here I was, proving to myself I could run. I loved the community, and I wanted to keep going back. I was still struggling a bit with binge eating and drinking too much – especially escaping to Canada for three months. But I came back and straight into parkrun again. Because I’d had so many changes – moving house, changing jobs, a marriage ending, etc – at one stage, parkrun was THE only stable thing in my life. Of course there were times I didn’t want to go, as I felt guilty or embarrassed with some of my life choices – how could I possibly front up? But I did it and it was a huge confidence boost to me. I volunteered a few times which I also loved. Most of the time I ran it, but sometimes I took my dog for a walk. It was such an inclusive atmosphere.

I looked forward to each Saturday morning, and although I was far from having my ducks in a row, it did keep me slightly ‘in check’ on Friday nights as I had a commitment the next day. I started studying again at 36 and shortly after met my second and current wife. I introduced her to parkrun and she too loved it. Her chronic pain has increased within the past two years so unfortunately she is not able to participate, but being in love (especially with someone who supports parkrun) has improved my mental health significantly. Emily and I actually participated in a Christmas Day news parkrun story in 2017. We had our article published in the Canberra Times and had a stint on the news! 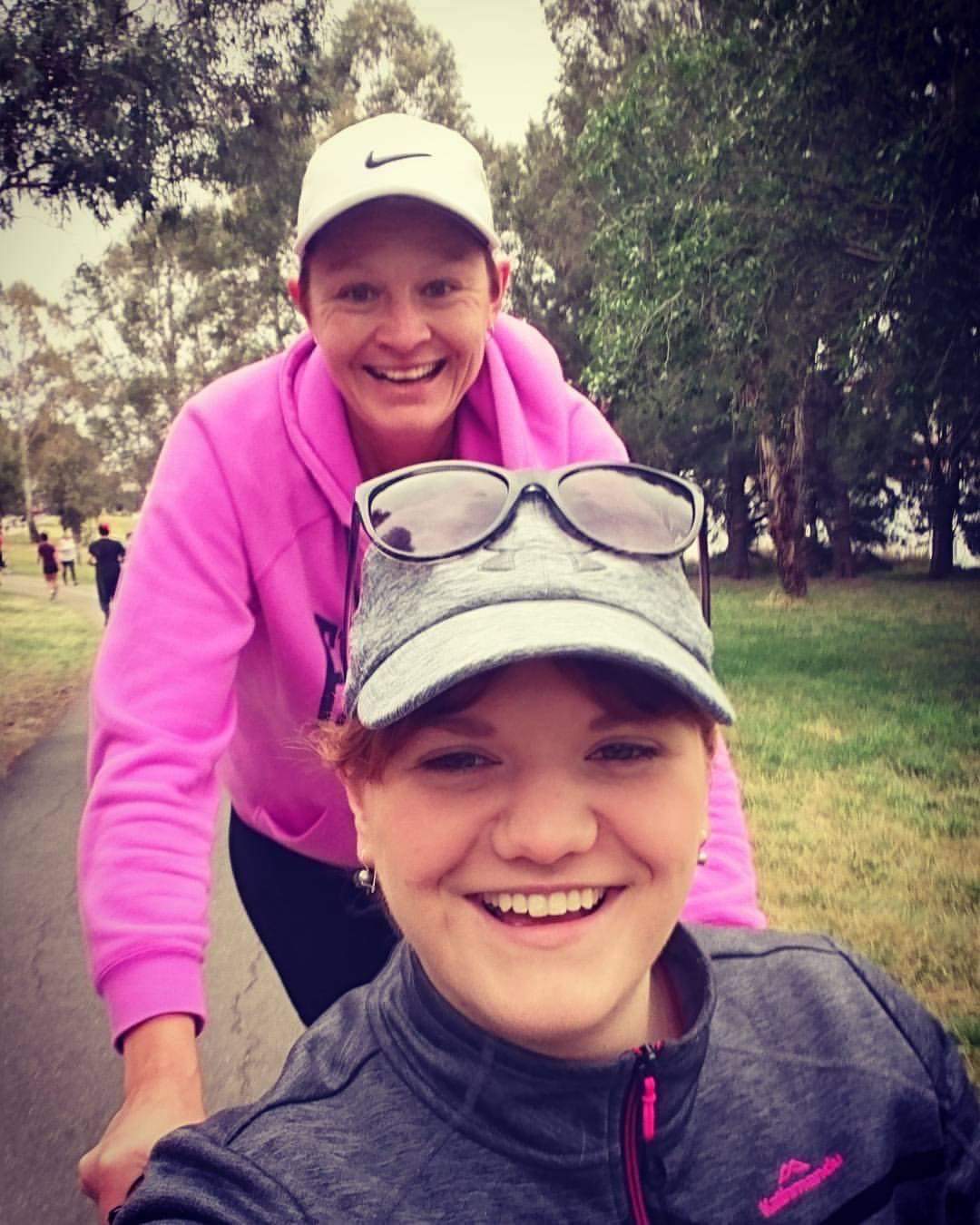 Since then I have done 208 parkruns. I’ve done a few interstate events, with the furthest one being Manjimup parkrun in Western Australia on our honeymoon. We have planned other weekends away on whether there is a parkrun in the local area. My fastest time for parkrun was Christmas Day 2020 with 700+ people at the Burley Griffin event. I think I got swept up in the crowd and ran it in 23:24!

I made a decision to give up alcohol completely a year and a half ago, as it’s in the depressant category of ‘drugs’ and I didn’t want to put anything extra into my system that I was going to bring me down. Emotionally, I feel so much stronger, absolutely love showing up to parkrun on Saturday mornings with a clear head and although I’ve been in recovery from a navicular stress fracture all year, I’m absolutely positive that keeping a good attitude, cross training and starting each day by waking up early sets the mood right. Some people have called me an ‘athlete’ – however I think that’s a lot of pressure. I prefer a ‘fit and active’ person – as this includes being mentally and emotionally fit.

Part of my coping strategies for life in general is patience, mindfulness, acceptance and keeping a really good attitude and humour. I was running up to 40 kilometres before accepting that I needed to take some time off, and nine months later I’ve just started to include some running in again. Part of me wants to ‘give birth’ quick and fast and get it over with, but I know that I have to keep up my self care on this one. I made a decision when I was coming back from injury that I was going to focus on an all round approach to fitness – including strength training, swimming, bike riding (I already had a mountain bike but indulged in a very nice road bike), power walking and relaxed paced walking. Oh, and dancing. If I could choose one day a week to push the feet faster, it’d be on Saturday morning for parkrun. Now I’ve got a triathlon in my mind – as long as it’s the fun type. I think there will always be a little bit of competitiveness in me.

I truly believe that keeping fit and active helps with healing. There is so much we don’t have control over in our lives, especially with COVID-19. Even in the times I’ve been down, depressed, very anxious, injured, or stressed, I’ve always managed to dig deep enough to make the climb out worth it, and I’ve climbed higher each time. I get up early each morning, I tune into how I’m feeling and I try very hard to be self aware and resilient. I still take a low dose anti depressant medication – not so much to help regulate my mood, but it keeps my digestive system settled. I have no regrets for my decisions. I didn’t realise, at times, how crappy I was feeling until I started feeling better.

I’m looking forward to parkrun being put back on the calendar but for now, I can still wear my many parkrun t-shirts!