Walk, don’t run: Why one of the simplest ways to exercise is making a comeback

If walking was a colour, it’d be the new black.

There’s no shortage of evidence that walking is truly a wonder drug; an exercise that can shed weight, increase life spans, reduce the risk of disease, improve heart health, keep joints mobile and benefit mental health.

“You’d have to take a lot of different pills to get all those different effects that you can get from going for a walk,” David Bishop, a professorial research fellow at Victoria University’s Institute for Health and Sport, said.

Which is why the UK Royal College of GPs in 2018 recommended that Britons take a brisk 10-minute walk each day.

But above all, the simple act of putting one foot in front of another, “Just makes you feel good,” Suzanne Crane said.

The 59-year-old from Canberra is an outreach ambassador for parkrun. 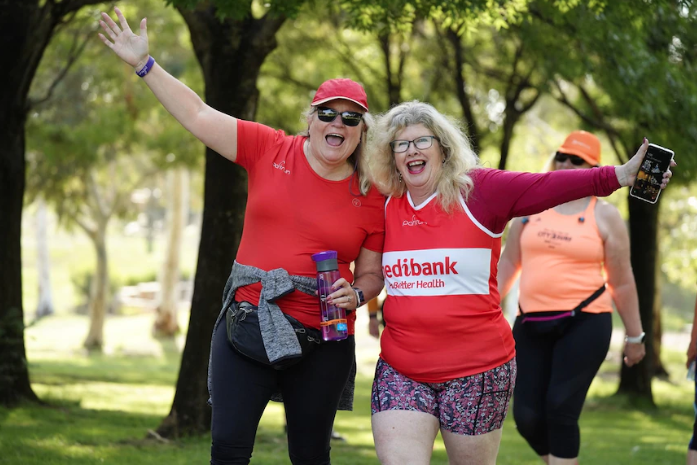 Despite its name, parkrun estimates between 10 and 15 per cent of participants are walkers. Crane thinks there are some events where that number is as high as 30 per cent.

Crane tried running, but it wasn’t for her.

“I was absolutely hopeless at it,” she said.

But then three ACL knee operations sealed the deal.

“I came back to parkrun by walking,” she said.

“When you’re injured, you lose that connection with people. But with parkrun, because you can walk it, you’re still able to see your friends.” 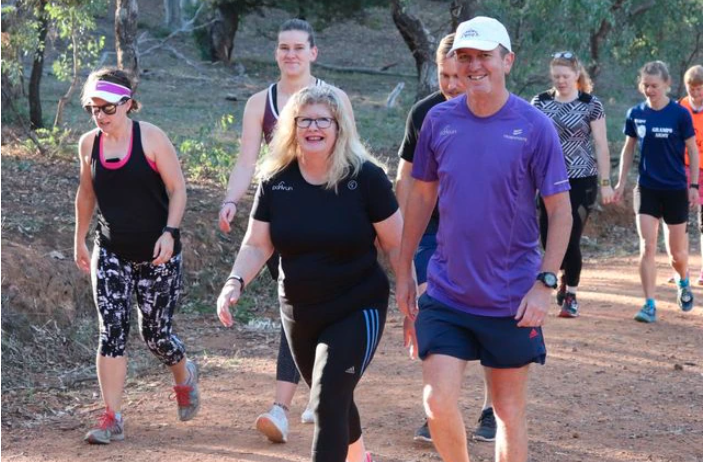 Slowing down and staying connected

Four years ago, Crane was thrown another curve ball when she was diagnosed with the auto-immune disease, psoriatic arthritis.

She said the disease could cause considerable pain. And because she’s on immunosuppressive drugs, COVID-19 has made mixing with people indoors particularly dangerous.

“It was easy to come back out of COVID and slowly get used to being around people by walking parkrun,” Crane said. 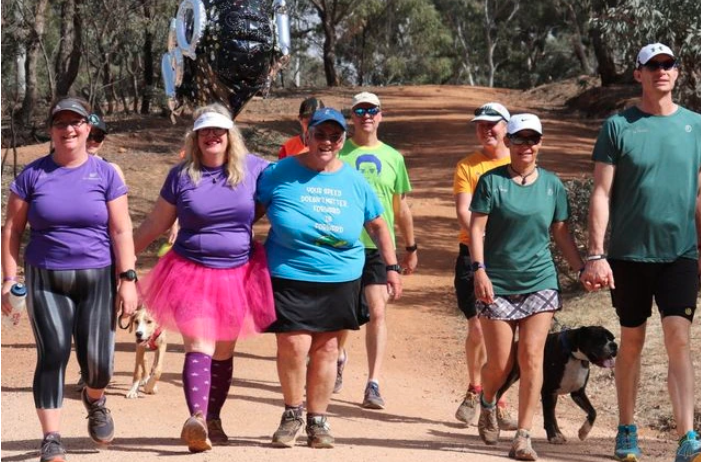 “Walking parkrun has been brilliant for me because it means I can still be out there with all my friends who are runners, but also I’ll have a whole swathe of people who are my walking friends.”

“It’s not only the physical, it’s also the emotional — like feeling connected with people.”

It’s all about going the distance

Crane isn’t alone. There are a lot of people who for reasons such as age, mobility, weight, fitness and injury aren’t able to run.

For most, walking is an alternative that is just as good.

The AusPlay survey, which records trends in Australians’ physical activity, shows walking is the most popular form of exercise.

And COVID really ramped up the results for women in particular.

As Professor Bishop points out, walking may not be as efficient as running in terms of calories burnt per minute, but if you measure calories burnt for distance, it’s almost the same. 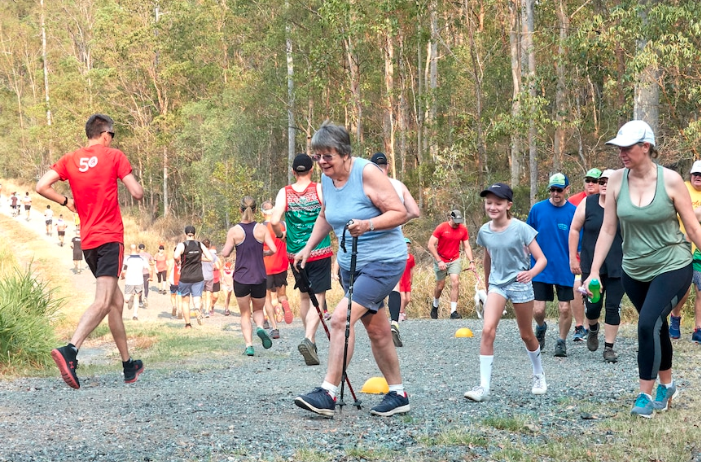 “You could either run four or five kilometres in 30 minutes, or walk the same distance in an hour. I think whatever you do regularly is probably going to give you the most benefits,” he said.

“If you can just force yourself to go for a jog once a week — but then that takes all your mental effort to get that done — versus walking every single day of the week or a few days of the week, in that instance walking is going to be the better option.”

“You can imagine kind of like an exponential increase going from sitting on the couch and doing nothing to walking is going to give you the biggest improvement in your health, and then you’re going to get more improvements by doing more intense activities,” he said.

Professor Bishop is focusing part of his research on trying to find the right level of exercise for people with dementia and Alzheimer’s.

He said increasingly, health practitioners and physiologists were seeing exercise as a medicine.

“Moderate intensity or walking is a really safe entry level where anyone can do it and we know that there are really good benefits,” he said.

“And for people who are capable and don’t have other contraindications, then introducing slightly higher doses of exercise is going to be beneficial.”

The goal is trying to find the magic spot of just enough exercise before too much is damaging. 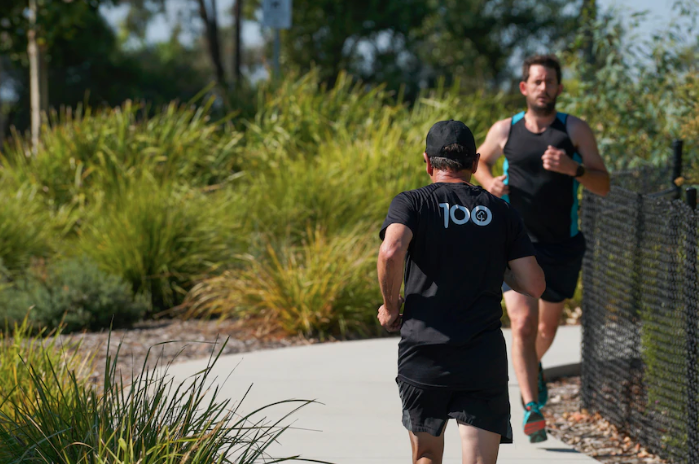 The sports world now talks about an inverted U: The more exercise you do, the more beneficial it becomes — but there’s a point where you go over the top and excessive exercise can lead to increased injuries. 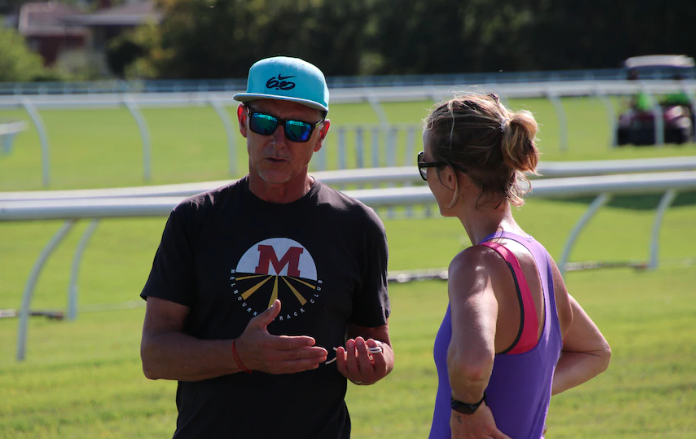 After running for an hour a day for more than 30 years, he was increasingly getting sore hips whenever he ran.

The final blow came on a bushwalk in New Zealand, when he fell on some slippery rocks and badly tore a lot of cartilage in his hip.

“It was so bad that I couldn’t walk properly,” Bideau said.

“I had an x-ray and a surgeon told me, ‘You’ve got real problems with your hip there, and if you want to walk properly, you’re going to need to have your hip replaced.’”

For a man whose life was running, it was a bitter pill to swallow, especially when his surgeon told him that if he returned to running he’d wear out his artificial hip more quickly.

“If I had my time again, once I got to 40, I would reduce that (his running frequency) to three or four times a week,” he said.

“It’s a really efficient way of getting fit, running. And I loved it and got a good feeling from it, and you always feel really fit and energetic after it.”

“But if I’d known this was coming, I would have stopped earlier because I really miss it.”

But Bideau, not a man to do things by halves, took up walking with gusto.

“First thing every morning, within 10 minutes of me waking up, I’m out the door walking,” he said.

“Even when I’m overseas or travelling, I still walk a minimum of an hour every morning and in the afternoon, and up to another hour again in the evening,” he said.

Now 62, he said he walked about 20 kilometres every day.

“Often when I start, I feel really stiff and about 90 years old, but once I get back and my body’s loosened up and I’m moving, I’m ready for the day,” Bideau said.

“I’ve cleared my mind of any thoughts that had been lingering from the day before and all the plans for this day and the next day are alive and well and ready to be undertaken after that walk.”

He can’t lie. He says he’d rather be running. 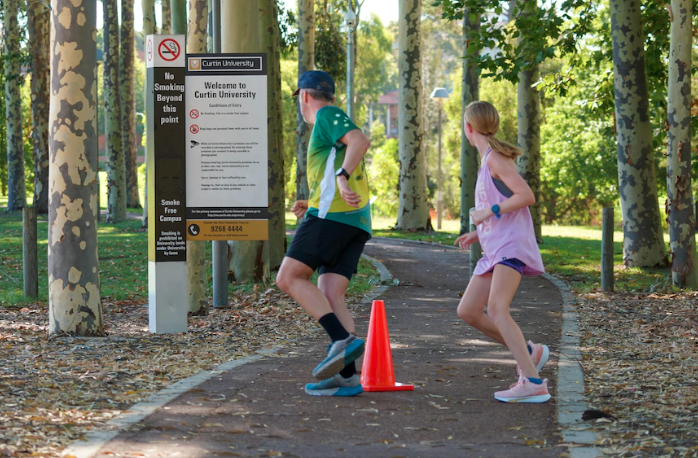 He says walking for him doesn’t provide the same enjoyment, although it does provide many of the same benefits.

“You do have that feeling, the endorphins. You feel like you’re alive and you’re active and you’re breathing, and you’ve got your day started,” he said.

“Anyone can do it if they can walk, and they can get reasonably fit.” 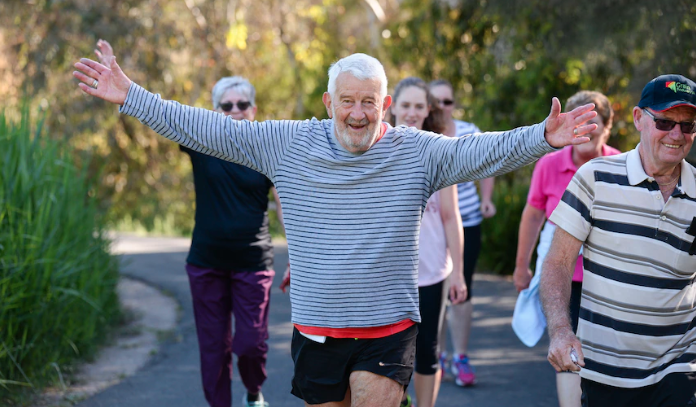 Which is the same point Professor Bishop and Suzanne Crane are making.

You don’t need to be a Nic Bideau and walk 20 kilometres a day to get a benefit from walking. You don’t even need to walk 10,000 steps (a figure that was plucked out of the air as a marketing exercise in the 1960s to sell a Japanese pedometer).

“I think most people are now seeing that it’s that accumulated energy expenditure that is important,” he said.

“The recommendations are to try and get around about 150 minutes of activity in a week. And once you’re there, that’s when you can then start working a little bit on the intensity.”

Crane said those looking for a place to start exercising should consider parkrun.

“It’s not a race, it’s about getting people out there and making them comfortable,” she said.

Indeed, the average time for parkrun has been getting slower, which Crane suggests is because more people are walking the five kilometres than previously.

“You can do things that everybody else does and enjoy life. It’s important to be able to be out with people.”

So why not out head out for a walk?