Victoria is a second home to this couple as John has been visiting for many years to see his daughter Ella-Jo who lives in Cook Street Village. So when the pair left their jobs to embark on an ‘adult gap year’, there was no better place to spend more time.

The keen runners are not new to parkrun and at home have the opportunity to attend several parkruns within a ten minute drive from their house, as there are so many parkruns in the U.K.! John has done over 200 parkruns and Becky is getting towards the 100 mark. John has always been a volunteer at home, taking on pacing and other roles, but Becky had only volunteered once at her home parkrun. 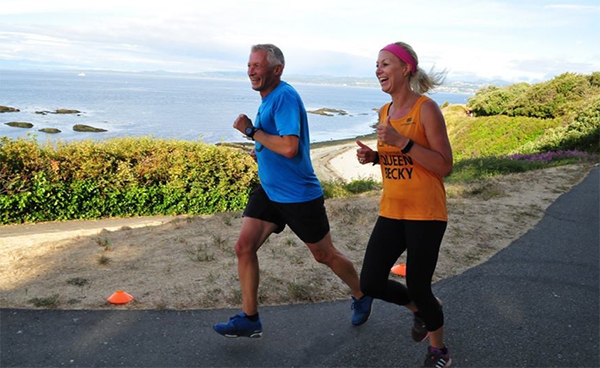 John and Becky first did Clover Point parkrun in October 2017 and were in love with everything about it. The route is stunning, the regulars are so welcoming, the many tourists make it different each week and yet as it’s relatively small post run coffee enables you to really get to know people. They were impressed that one family in particular volunteered every week. Mike Angrove who led setting up Clover Point parkrun and who is the lead Run Director, has the support of his mum, dad and girlfriend who volunteer most weeks. So this encouraged John and Becky that they could make a more significant contribution, particularly as they made it their mission to volunteer at events during their long visit. The pair have enjoyed volunteering at several events this summer including Tour de Victoria, the Oak Bay Half Marathon, the GoodLife Victoria Marathon, the Sidney Seaside Run and the Beer Festival. 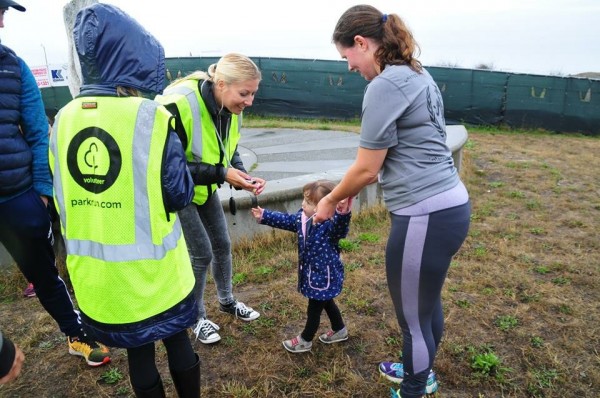 The Clover Point volunteer team is fairly small given the number of runners and the route, but the Run Directors are generally not short of volunteers, as everyone gets involved. There are a number of young volunteers and they bring so much to the group.

The pair soon got far more involved in parkrun with John taking on Run Director when needed and Becky doing all other volunteer roles. The pair love to help welcome visitors and talk to them about their travel plans whilst in the area. They are both proud to be so involved in the community and want to enhance visitors experience of the wonderful places to see as do all of the parkrun team. 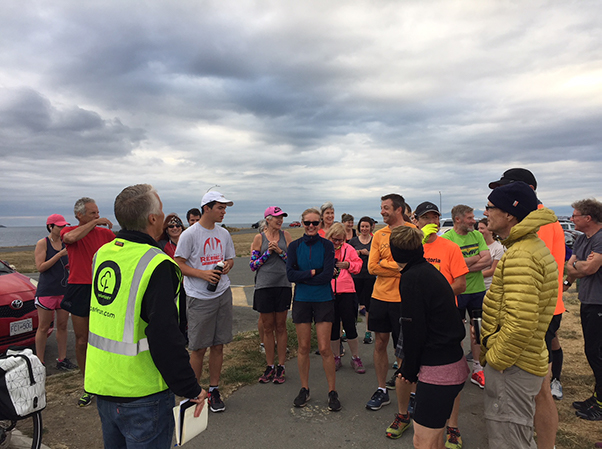 Clover Point has around 30 Runners a week on average but in the summer and on its first birthday saw a record 63 Runners. The numbers are generally up each week compared to the first year and a true ‘core team’ of regulars is now established. Despite numbers being lower than many other parkruns, the team have still experienced the dreaded ‘loss’ of a couple of barcodes, making the processing of results more fun!

As with all parkruns, Clover Point is very inclusive. Speedy runners finish at around 18 minutes and run walkers up to an hour. Whilst dogs cannot join this parkrun (as the run goes through an unleashed dog area) those running with buggies are often in attendance. One runner is a keen baker and regular brings home baked treats, the group recently had fun dressing up for Halloween and they have even welcomed the Mayor twice.

Over the summer season there have been other key highlights for the parkrun team. A couple visiting from the South of England gave Clover Point two crocheted scanner warmers, two cruise ship passengers ensured they were first off the ship to make their weekly parkrun and a keen parkrun tourist from the U.K. wanted to run a new parkrun to celebrate her 100thand travelled to Clover Point.

As with most parkruns, Clover Point has a number of traditions each week. The tail runner wears a wonderfully colourful pin on tail and those marking their 100th parkrun get to wear the ’100′ cape. It’s only a matter of time before other such traditions are introduced! Clover Point is also very lucky to have a regular volunteer who is a professional photographer and runners get amazing photos soon after the morning run as they are shared on Facebook.

So as Clover Point parkrun continues to grow and as does parkrun within Canada the whole team look forward to welcoming more regulars and visits and seeing the regulars start getting their milestone t-shirts.

On 7th March 2020 we held our 179th parkrun at Nose Hill Park in Calgary. It was great fun to be part of the Global Women’s day parkrun and wear purple in -12 degrees. A local women’s soccer team turned up and even some of the dogs dressed up.   To be fair we were…