parkrun’s defining feature is consistency. 5 km every Saturday at 9 am (in most places). There are lots of running groups you can join for free, there’s no shortage of timed 5 km races and many of them take part on a Saturday. But parkrun is the only free, timed, 5 km run you can do on the same course every week. Well, it is at most parkruns, but, here in Canada the conditions can be a bit more challenging, and since we started at Kanata we’ve had numerous unanticipated problems and weather events, from flooding to ice and even a new housing development that has required us to adjust our course. 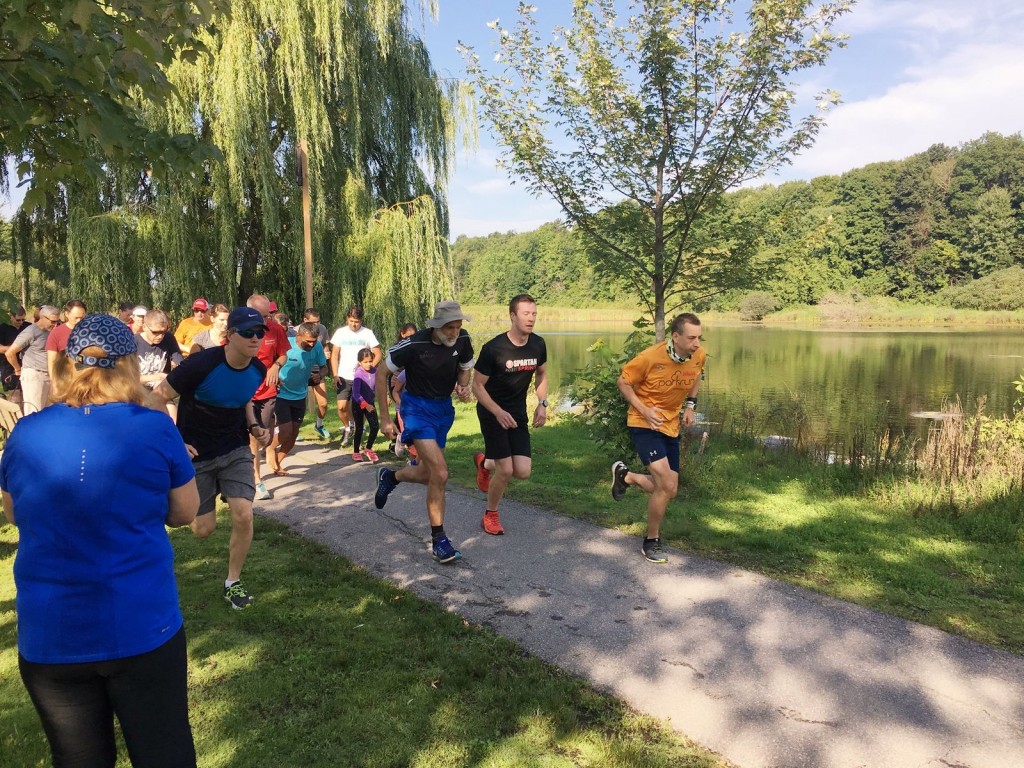 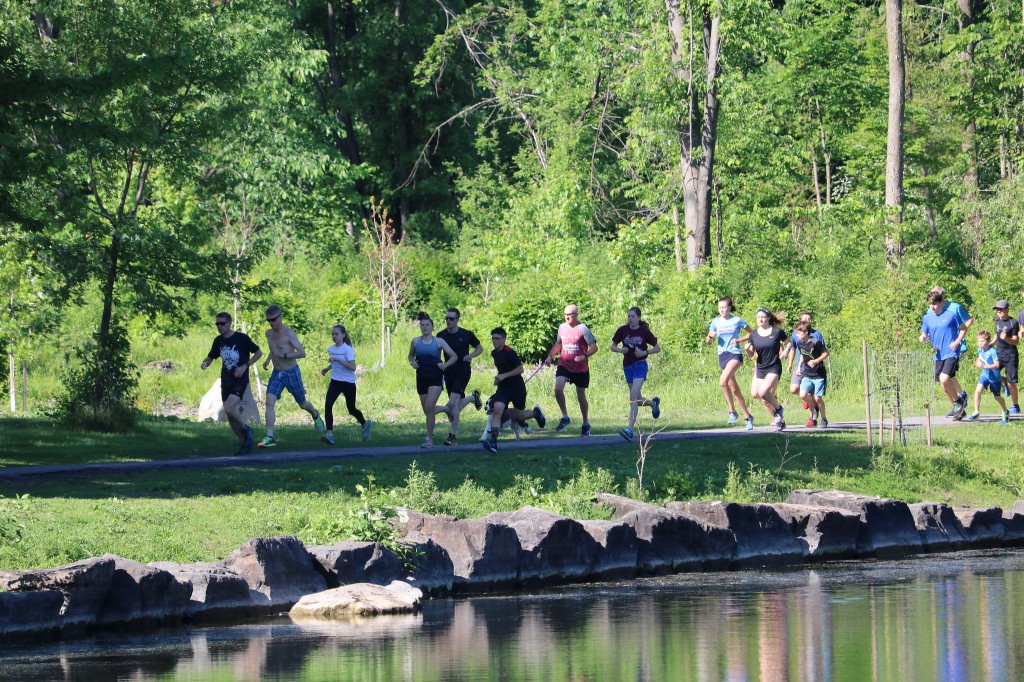 I’m obviously a little biased, now that I’ve made Kanata my home parkrun, but I believe we probably have one of the prettiest parkrun courses in North America. Kanata parkrun began as a horseshoe-shaped course, starting and finishing on a paved path in a grassy arboretum, heading out along woodland trails that skirt the Beaver pond. On the north side is a winding and somewhat rolling section of the course, with one short but steep hill, that we like to affectionately call an ‘undulation’. Personally, this is my favourite side of the course, with a very fun few hundred metres that feels almost rollercoaster-like to run as the course dips and weaves through the trees. 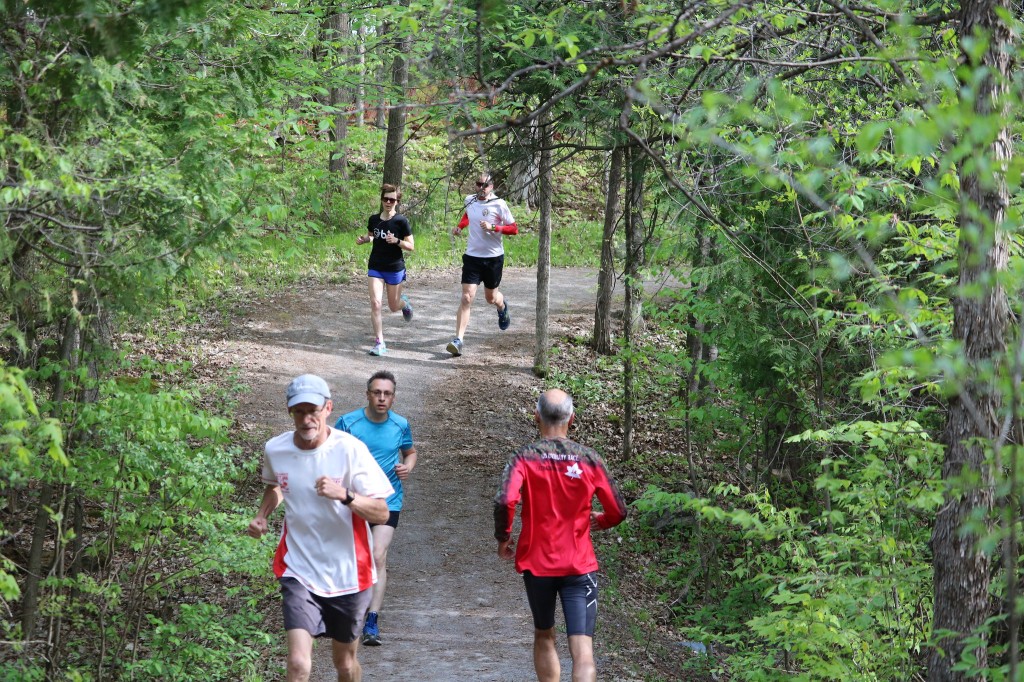 Unfortunately, since September 2018, the north side of our trail has been closed while the services for a new nearby housing development are installed, which involves blasting through bedrock with high explosives, though we’ve never heard any work on a weekend and that section of the trail is fenced off. The south side of the course is an easier flat woodland trail, followed by a final flat paved stretch going around the beaver pond, which is rather helpful for picking up speed as you head into the finish. The original route was run like you would sit on a swing, starting part way around the beaver pond, swinging down past the vertex of the horseshoe, where the car park is and we hold our run briefings, up out on the north side and then back down, past the car park once again and up out on the south side before the final turn around and the home run to the paved trail on the side of the beaver pond, finishing just before the entrance to the woods by the north side of the trail. 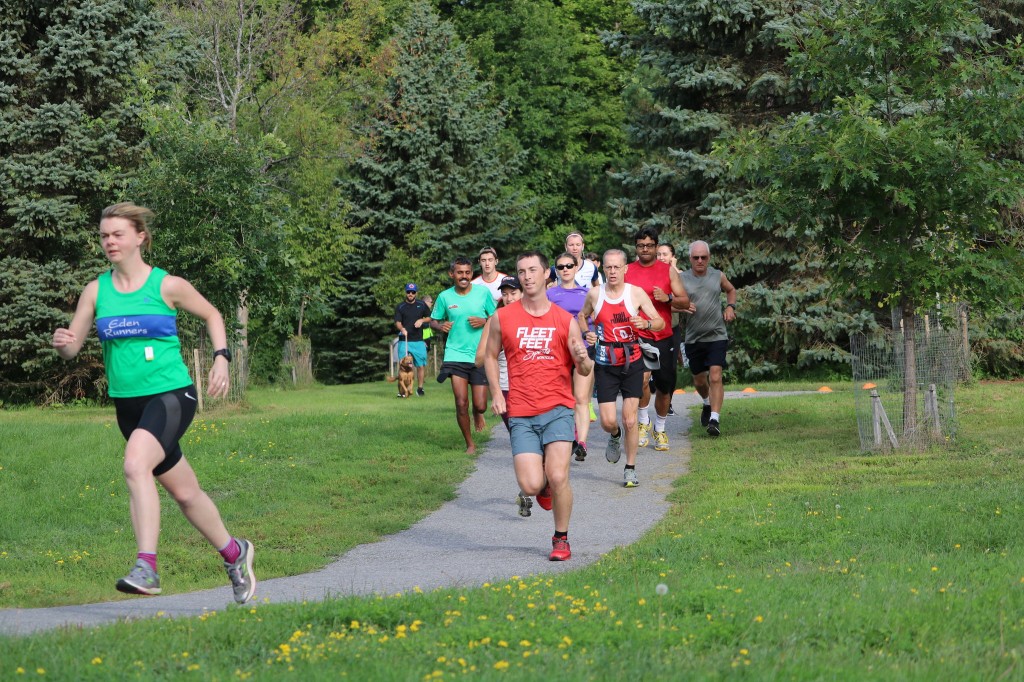 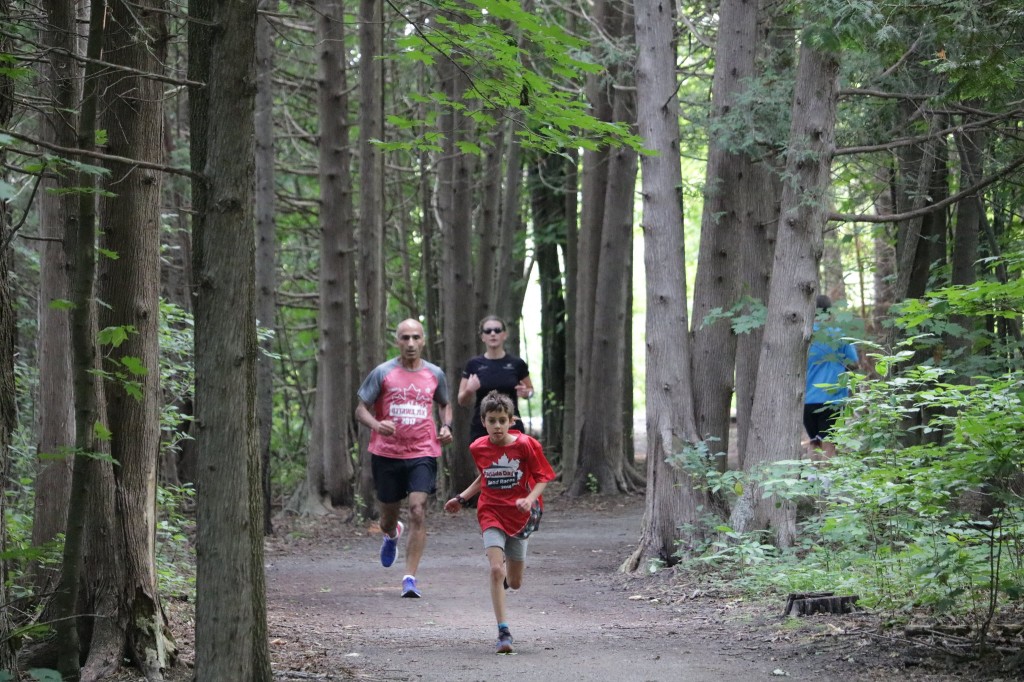 Now that almost half of the course is closed we have switched from our original route to a twice out and back on the south side. A route that has some pluses, but has faced some weather-induced challenges. This year we’ve had tornados, floods, and the typical Canadian, snow, ice and freezing rain. The positive is that the flatter course is enabling some PBs here at Kanata. For a few weeks, we had small iterative changes to the route as we discovered how confusing our little triangles in the arboretum could be, not to mention running on the right, when you’re British and used to driving on the left. 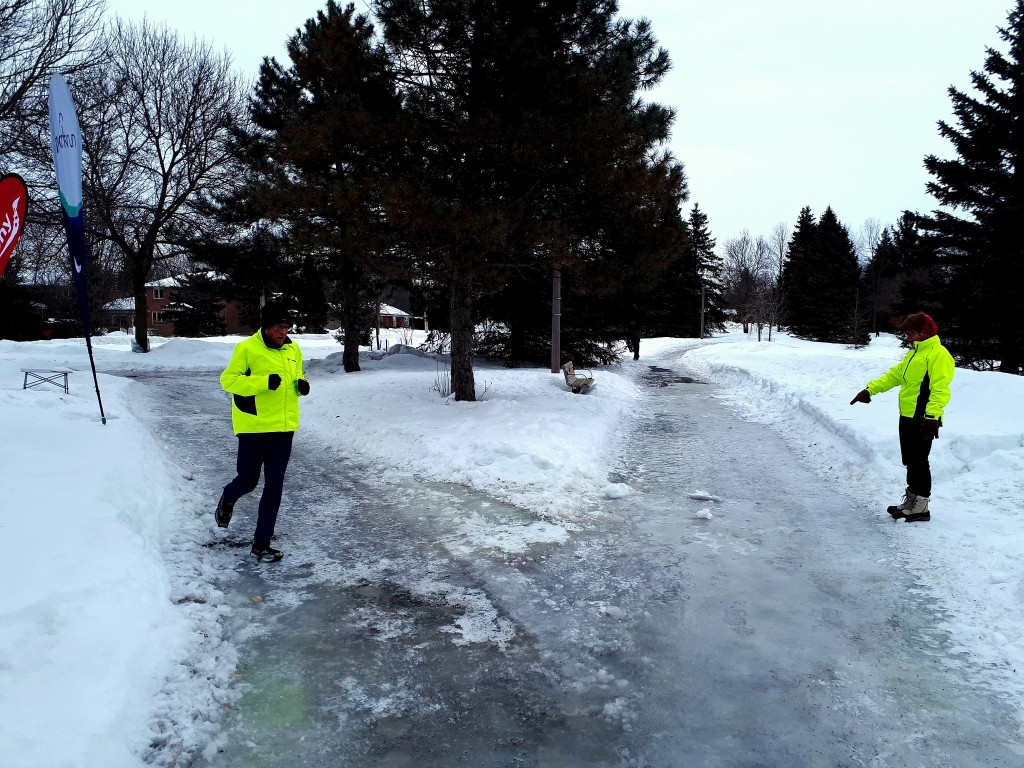 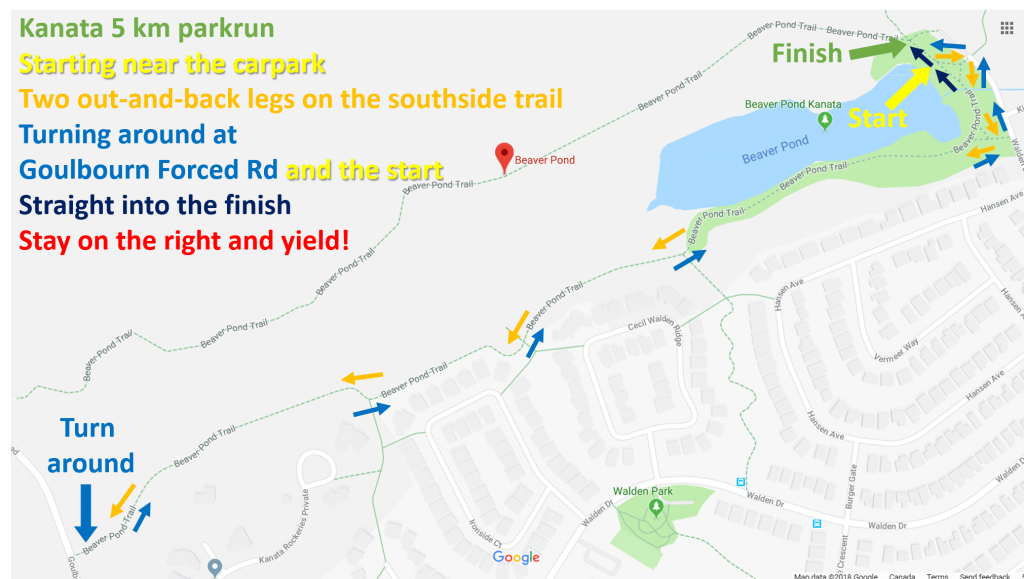 The trail is a little narrower on the south side and this winter, at points, it has been strictly single file in some places, where the snow and ice is packed down, and anyone venturing even slightly off the trail could end up knee deep in snow.

Some days we’ve had to make small adjustments to the finish line to accommodate icy conditions that make the trail like an ice rink near the car park and more recently flooding has meant that the beaver pond has spilled over and forced us to cancel the event all together as we now have less room to make further adjustments to the route.

So following our social media and turning up early for the race briefing is always advisable at Kanata. One of our volunteers always goes out and checks the course, sometimes the day before when the weather conditions look unfavourable. It does keep things interesting and I don’t think I’d swap our beautiful course for any other. 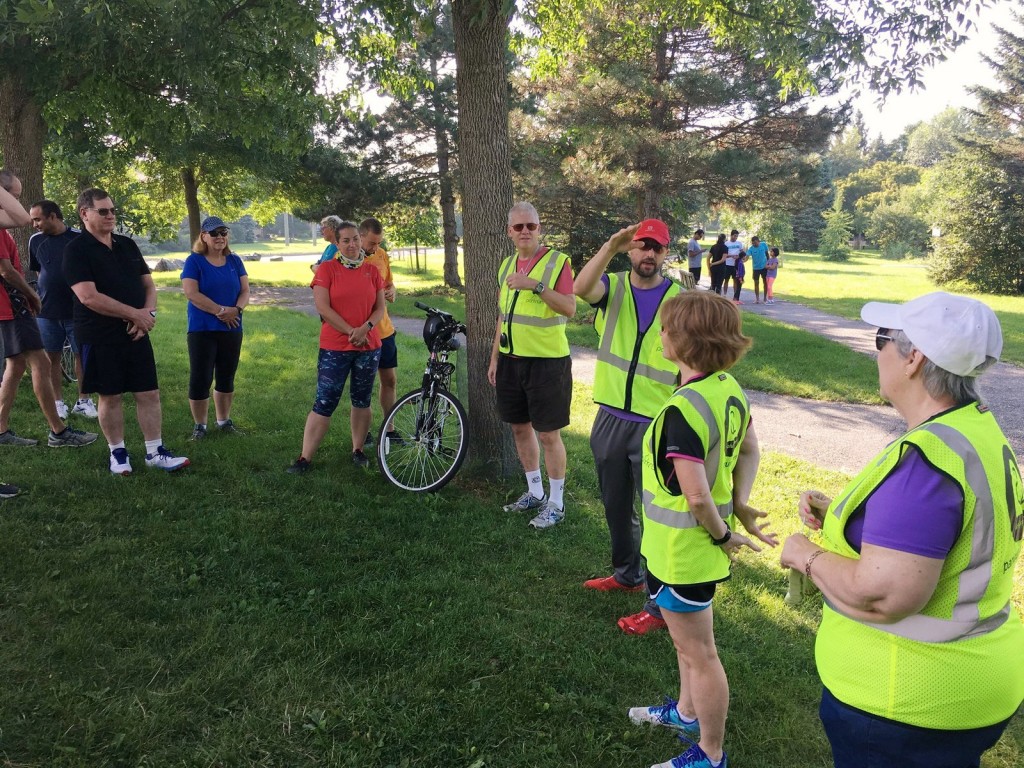