In July 2019 I was honoured to attend the parkrun ambassadors conference in the UK. This event brought together parkrun ambassadors from the UK and many countries around the world. We got to meet the UK support team and hear presentations from them and network with our peers. It was a weekend to celebrate everything that is parkrun related and hear the plans for the future and how we are all helping to create a healthier, happier planet.

To tell the truth, I was somewhat stagestruck when I found myself, at the opening presentations, sitting at a big round table, next to the founder of parkrun, Paul Sinton-Hewitt CBE. I invited him to visit a parkrun in Canada as he has not been here yet, so hopefully he will take me up on the offer in the not too distant future. 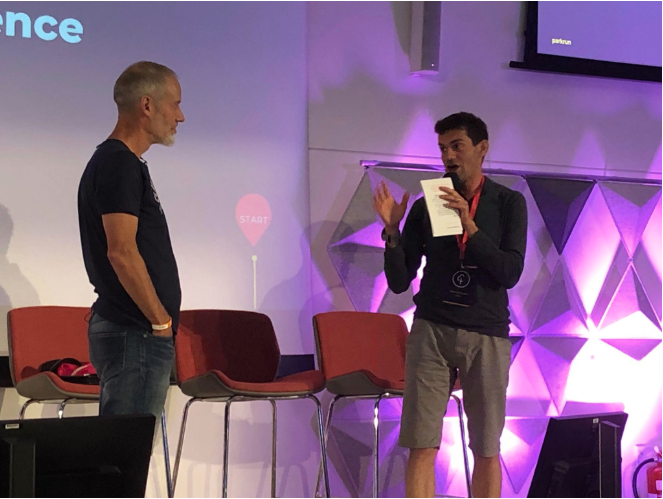 The weekend was very memorable as I got to experience the biggest parkrun I have ever been to! The Kingsbury Water parkrun in the Midlands was a fabulous course and featured all the same volunteer roles that we are used to here in Calgary, but on a bigger scale! My finishers email came remarkably quickly and I was amazed to receive the notice:
“You finished in 639th place and were the 246th female out of a field of 756 parkrunners”.

Another poignant moment was actually a completely unscripted and unplanned event and occurred on our way back from this large parkrun on that Saturday morning.

We were transported in several large coaches and came to a standstill in a traffic jam on the way back to the conference venue. After a few minutes of going nowhere, some of us checked our phones and realized we were probably only a couple of miles away. Instead of waiting, my fellow ambassadors decided en-mass to get off the coaches and run back instead. We cheered as they left and set off. Many others from the other coaches also decided to run back instead. I felt so proud of them all for taking matters into their own hands and taking positive action. I wished I could have joined them too but was still trying to rehab my broken knee from a skiing accident in March of this year. As I had already run/walked the 5k parkrun I couldn’t risk flaring it up further, so had to be patient and wait another 50 minutes for the coach to get through the malfunctioning traffic light which caused the hold up.

I was not alone on the coach as there were a few of us who had to wait. I wished I had been able to run back with the others and felt a bit depressed to have been left behind. My spirits were lifted however when we arrived back at the conference venue and, as we turned the last corner, there were all the runners waiting for us, cheering and clapping as our coaches returned. Instead of going back to their rooms to change for the forthcoming afternoon presentations they had waited for us! It reminded me of being the Tail Walker and being cheered across the finish line at the end. It symbolized the ethos and inclusively of parkrun.

This incident also reminded me that life gives us all set backs at times but we can make our own positive decisions as to how to deal with these and support each other along the way. I have never met a more positive group of people who are all passionate about parkrun. Most of the people I met were volunteers, just like me, and it was a pleasure to be associated with them. 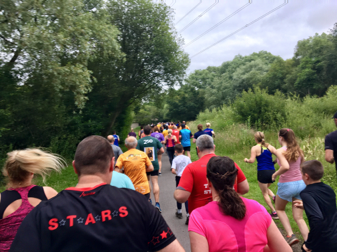 On 7th March 2020 we held our 179th parkrun at Nose Hill Park in Calgary. It was great fun to be part of the Global Women’s day parkrun and wear purple in -12 degrees. A local women’s soccer team turned up and even some of the dogs dressed up.   To be fair we were…