A parkrun in our backyard!

They heard whisperings that something called “parkrun” was coming to their community. But most of the BLT Runners in Halifax, NS didn’t know what a parkrun was. A few months later, and Chain of Lakes parkrun has been solidified as a weekly staple for Craig Durling, Ian Loughead and their fellow running club buddies!

It was the dead of winter 2019 when members of our club, the BLT Runners (based in the Halifax suburbs of Beechville, Lakeside and Timberlea), started to hear chatter about a parkrun coming to Halifax. What is parkrun? A few of us had heard of it, and at least one of our members had participated in a parkrun before, but most of us didn’t know much about it. Could a weekly 5k event work?

As more details emerged, so did more questions. Organizers would need to find a location that worked year-round and presumably with no road crossings for safety. When organizers announced the Chain of Lakes Trail location, it made sense for these reasons. The paved trail is kept clear of ice and snow during the winter, and it has a stretch of about 3km between road crossings meaning a year-round out-and-back 5k would fit. Though the business park location with limited access to public transit and few residential dwellings nearby were potential obstacles. With Saturday also being a common long-run day for many, some of us wondered if it could sustain interest. 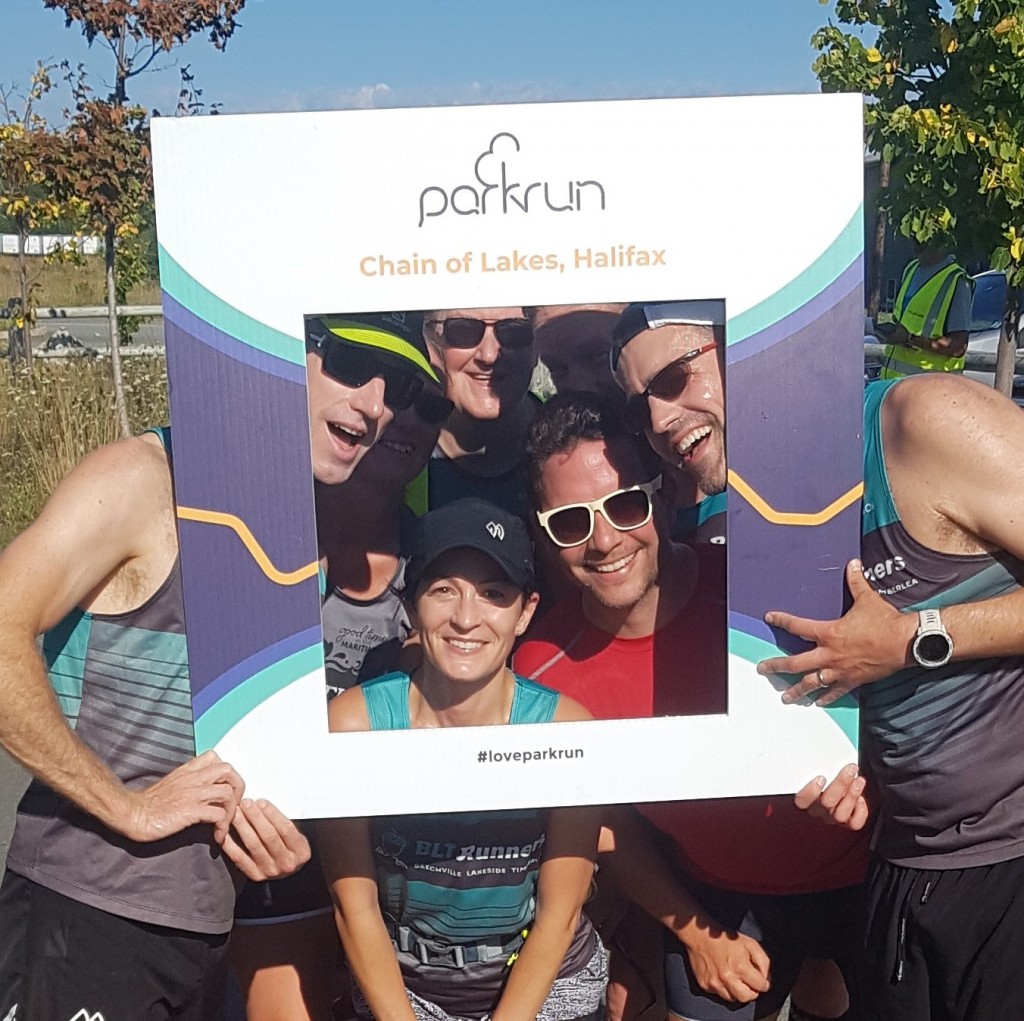 March 16, 2019 was the inaugural Chain of Lakes parkrun. I decided to check it out, registered and showed up with my barcode. It was a typical Halifax winter day: overcast and mild with remnants of snow on the ground. To my surprise, there was a good crowd gathered for the start, 29 other runners (including some others from our club), plus five volunteers to be exact. We received an overview from Run Director Jaclyn, and then we were off.

5km later, I crossed the line as the first ever finisher of this event. My course record would last only two weeks as word of the event began to spread and more accomplished runners turned up.

After catching my breath, I’m sure the first words out of my mouth were “THAT WAS SO HARD!” The course is challenging. The Chain of Lakes trail is built on a former railbed that originates from the lower ground and gradually goes up hill. While it’s not a steep grade, it’s unrelenting. In this out and back course, you start with the easy part – from the top, run downhill for 2.5km. But then you have to turn around and come all the way back up. The final 500m is the toughest. The finish, which is just beyond a highway overpass, is in your sight. It looks so close, yet as you are emptying the tank running hard uphill, it feels so far away. As I was shaking off the pain of what was one of the tougher 5k runs in recent memory, it probably wouldn’t have occurred to me that would quickly grow fond of this challenging course.

In the weeks and months to come, I would go back to parkrun many times. Each week, I would see a mix of familiar faces from our club along with new faces and many towners, or Tourists (as the parkrun community says). I’ve gradually figured out an optimal approach and incrementally improved my time. It’s made me a stronger runner and I’m looking forward to opportunities to try other parkruns during future travel.

I had heard of parkrun probably from watching various Youtube videos and thought it was a great idea in general. To be honest though I didn’t see how it fit into my schedule. Weekends are when I do my long runs. Racing 5K every weekend didn’t make sense. Still, I signed up anyway.

It wasn’t until week two that I ventured out and that was because a friend hoped I would pace her to see how fast her 5K time would be. I crossed the finish line that day with a line of other runners tagging along behind me. I then proceeded to go out for another run, but I will say it was a great group and I enjoyed my first parkrun.

The next week I decided to go out and actually run hard and see how I would do. I pushed and somehow found myself crossing the finish line in first and setting a new course record. Two weeks, two very different ways of running and I thought “I’ll probably come back again and try this out.”

Over the course of the Spring and Summer I have raced and I have paced and I have been really enjoying my time at parkrun. I have pushed myself to new personal bests and guided others to theirs. I have been the first finisher at the run a few times, though often the best runs were ones I didn’t finish first. I have run in sun, wind, rain and snow. I have had the chance to chat with volunteers and runners both before and after the run making new friends.

I think back and now realize that fitting a 5K group run into your regular weekend running is a really nice addition. Run it hard or easy (or walk), finish first or come in last, you have a community of friends waiting at the end.

A GREAT FIT FOR THE BLT RUNNERS

With the Chain of Lakes parkrun only a few kilometres away from the communities of Beechville Lakeside and Timberlea, more and more of our club members have come out week by week. In a matter of months, we have rocketed up to third place on the parkrun Canada biggest clubs list with 60 registered parkruners at the time of this blog.

Our running club embraces a model of inclusiveness. There is a wide range of running ability within our membership, and we strive to make everyone feel welcome. For that reason, parkrun is a great fit for our club. No matter your ability, parkrun makes you feel welcome, even those who may be running in a timed 5k for the first time. There’s no pressure and stress like you often experience in road races. Just show up with your barcode and go run, but not necessarily run hard if you don’t want to. And with the Tail Walker, nobody finishes last. But best of all, and so importantly for inclusion, parkrun is free!

It was evident that as time went on, our members quickly started to appreciate the inclusive nature of parkrun and also realized the benefit of the easy start and finish system that parkrun offers. In some cases, members would show up to participate part way through their long run. We also started to see members showing up to volunteer when they weren’t running. A year ago, few of us had even heard of the parkrun movement, yet since the first event in March 2019, parkrun has become a huge part of our running club!

Thank you parkrun!
By Craig Durling and Ian Loughead