John MacMillan is passionate about running, photography, and food. This is the story of how he became a regular volunteer at the Downsview parkrun, where he can combine all three passions!

It was all accidental. On a Saturday morning in High Park, a few years ago, I met a couple from the U.K. who were looking for a parkrun in Toronto. They explained that parkruns were free, timed 5k runs held in local parks all over England.

“Neat idea,” I replied, “but we don’t have any.” I like to run competitively and am accustomed to paying $20 or more for a race. The notion that one could run in an event that cost nothing was quite appealing. Still, no one in my running club spoke about parkruns, and I had no plans to go to England, so I forgot all about them.

Flash forward to last fall. I planned to run a 5k run downtown, a no-frills race costing $20. A former coach suggested I run the parkrun at Downsview Park instead and it wouldn’t cost anything. “Huh?” I thought, “they are in Toronto now?” Lured by the free price and curiosity, I discovered their website, registered for a barcode, and checked out the course (two loops on a wide paved trail in the northwest corner of Downsview Park) and how to get there (1.4 km walk from the Downsview Park subway station). I learned the runs take place every Saturday at 9 a.m. and manned by volunteers.

Here was my chance to explore parkrun, right here in Toronto!

When I arrived around 8:30 am, I was immediately struck by the friendliness and simplicity of the run. I noticed a few signs, flags, and small cones marking the course, and a small number of volunteers, identified in bibs with different colours. The Run Director described the course and welcomed visitors and first timers. A few minutes later, the group walked a short distance to the starting line, and someone shouted, “go!” When you’re used to a horn, it’s a bit surreal. It reminded me of stages in the Cabot Relay Race, which also have a voice start.

With only about 40 people, we were well spread out and my goal was to try to catch the person a hundred metres or so ahead of me. Though that proved elusive, it was nice to round a bend, heading downhill, and see a group of people clustered at the finish line cheering. On the second loop, it was fun to finish on the downhill. Just a line of cones marked the finish path. I showed my barcode to a volunteer and it was all over.

When I got home, I had already received my official results by email. About 22 minutes. I decided to run the next week and strive for a faster time.

The next week, I ran again, still impressed by the simplicity of the run but also starting to think about the volunteers and their crazy commitment to come out every week. As it turned out, I finished about the same time but my right hip felt quite sore. I decided to rest it.

It’s tough when you’re injured, especially when you are around people who are running seemingly without any problems. Ideally, it’s a minor setback. When it doesn’t respond well to rest, stretching, and/or physiotherapy, it’s easy to find yourself in a funk and feeling sorry for yourself. I’ve found it’s helpful to focus on the positive. Volunteering at parkrun became that focus.

For several years, my Saturday morning routine was to cycle to High Park, run once or twice around the park with a group from Longboat Roadrunners, and socialize afterwards over a coffee or breakfast. My new routine is to head to Downsview, meet Lawrence, Cullen, Amy, Bonnie, Fred and other volunteers, and take pictures (or do another job if needed), and socialize afterwards over coffee at Cocoon on Wilson Avenue.

I have visited parkruns at Whitby, Ajax (Duffins Trail), Mississauga (Meadowvale), and Oakville, and met organizers and volunteers who share the same friendliness, camaraderie, and commitment as the Downsview crew. 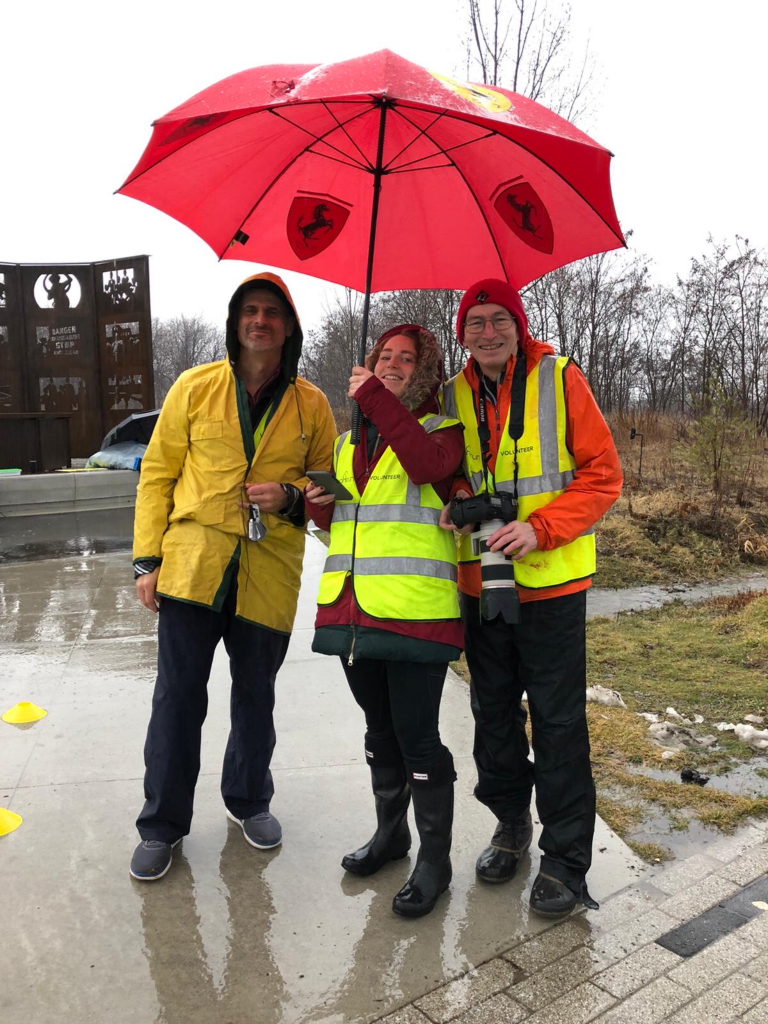 As much as I enjoy running, I enjoy photography. So when I can’t run, it’s nice to have the opportunity to take pictures every week at parkruns, and meet the challenge of winter conditions like snow and cold. My interest in photography started about six years ago. Doug Smith, the Meet Director for an indoor masters track meet at York University asked me if I would take photos with his semi-professional digital camera. What a difference from my compact point and shoot! I could get really good high-speed shots and closeups. A few months later, I bought a similar camera, and ever since I’ve been taking pictures at numerous track and running, and occasional social events.

And last but not least…the food!

I’m also interested in the culinary and baking arts, and I’ve taken numerous courses. I bring sweet treats to parkrun nearly every week—they are always well received.  As you might expect, sugar and running go well together! The one big challenge to the baking is to bring it to parkrun, especially by bike.

I like to meet parkrun tourists from places like the U.K., Australia and South Africa. I find myself inspired to travel and run parkruns outside Canada. The magic of parkruns is that the focus is on participation, not speed. Ideally, I’ll run them fast but I suspect it will be fun at a jog too.

When the world gets turned upside down

The last time Kiwanis parkrun provided a post for this blog, it was shortly after a gloriously sunny Canada Day. Things seemed set for another great year; on the 7th of March, they had a record turnout for International Women’s Day event (with a record number of paper towel rolls donated to the Anova women’s…