Once the COVID-19 travel ban is lifted, maybe you’re inspired to visit one of the world’s most famous waterfalls, Niagara Falls? The good news is that you can do so without missing a parkrun! There are a number of events dotted around Lake Ontario, including Nautical parkrun in Oakville, ON.

Though smaller in numbers than most new parkruns, Nautical parkrun seems to attain a higher than average tourist count. This, says Event Director Roderick Mark, is probably attributable to the fact that we are located near a highway between Toronto and Niagara Falls. Here are some tales of tourism from Nautical parkrun.

One rainy day in summer

One stormy Summer morning we noted that our two neighbouring parkruns had cancelled due to electrical storms. We had set up the course, but then the pouring rain began. We decided to cancel and were just about to announce it online when a car with 3 tourists pulled up. Two more tourists arrived. Of the six runners who arrived that day, just Declan, a university student, was our local participant.

The friendly, smiling visitors from England and Nautical parkrun’s own Declan waited out the rain. They really wanted to participate in our parkrun.  So too did the heavens apparently, because as soon as they got out of their cars, the thunder, lightning and heavy rain went away, almost like magic!  Our tourists told us that the previous week they had run the nearby River Oaks parkrun in very hot and humid conditions, and were looking forward to a local parkrun with a bit of rain to cool things off. Now if only we could get our locals to see rainy conditions that way!

From the outset, even our test run had drawn Irish tourist Conrad, who had run the nearby Beachstrip parkrun at 8AM.  Then our first official parkrun event saw Jessica Bilbrey from Clapham Chasers Running Club in the UK take first female finisher. Jessica and her family now live in Buffalo, NY and came to our parkrun while traveling on their way home from a visit to Toronto. Her husband took the opportunity to help out as a course marshall while their children enjoyed time in the big jungle gym and splash pad area near the start of the run. We also had tourist Darren Graham from ‘parkrun World Tourists’ show up at our inaugural run.

Our event number 2 saw the Boonzaier’s visit us from Pretoria, South Africa. They had come to the area to witness the birth of their new twin grandchildren.

Event number 3 saw Idle AC’s Keith Bennet, Highgate Harriers Emma Wilson and GoodGym’s Nicola Tarrant.  All three were visitors from the UK.  Nicola was most incredibly was attending her 344th different parkrun location with us, had previously met up with Keith before at a Swedish parkrun.  Keith was kind enough to contribute pictures with us, which he had taken en route while participating in our parkrun.

Another incredible traveler is 26.2 RRC’s John Mathews, with 456 parkruns under his belt.  Not only did he end up being the first finisher for our event #4, but he then proceeded to don a high viz vest and hand out finishing tokens.  It was almost as if he was in a hurry to finish in order to help out.

If there is anything we have learned from the valuable parkrun tourists to our community it is that they are incredibly helpful, want the best for us and genuinely want us to succeed.  Then when they go away afterwards, amazingly they send us messages and testimonials of how much they enjoyed our parkrun while singing the praises of our very friendly and helpful volunteers.  We’re happy to meet you all! 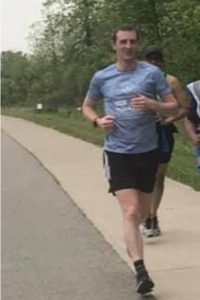