The meaning of parkrun for our family has evolved over the past few years.

At first it was all about running…

My first introduction to parkrun was at Curl Curl on Sydney’s Northern Beaches in July 2015. The running group I was training with recommended the weekly parkruns as part of the training plan. While I was preparing for my first half-marathon, the weekly 5k time-trial was a useful guide of whether I was making any progress. parkrun events in Australia usually start at 7 am to allow parents to be back home in time for Saturday school sports. There was no way anyone else in my family would wake up at 6 am on a crispy cold July morning (it gets down to 0 degrees in July in Sydney) to join me for parkruns. 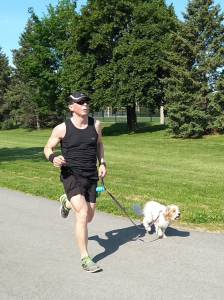 Then it became about family…

In 2017 my job took me to Toronto and at that time there were no parkrun events near me. However, when I checked again a year later, I found that the River Oaks parkrun was about to start in June 2018, and I joined the inaugural parkrun. parkruns in Canada usually start at 9 am and after several solo runs, the rest of the family started joining me too. Ever since then, parkrun has become a family event. 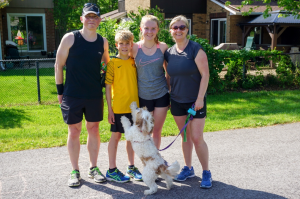 We liked how it could jumpstart our weekend and we noticed that we could get more things done on the weekends that began with a parkrun. 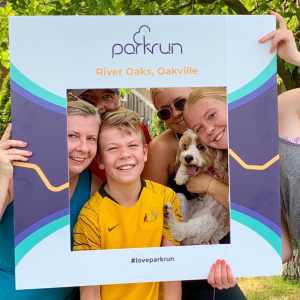 While our teenage daughter was always happy to join for a run or to volunteer, we often had to use a little bit of persuasion and bribing with our preteen son. Sometimes it worked and sometimes it did not. Usually a promise of the after-run Booster juice did the magic. Hence, we started joining the parkrun group for the after-runs coffee (and Booster juice). 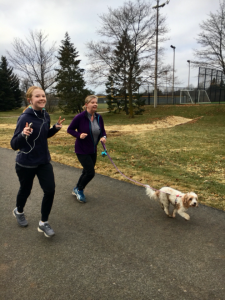 Our dog Lily loves parkruns too and has completed around 30 of them. Amazingly enough, on Saturday mornings she seems to know that it’s a parkrun day (maybe because we are waking up much later than on weekdays). On those days she refuses to go out to the backyard as she is afraid that we may leave her at home. She is following our every step instead and gets super excited when we start changing into our running gear. 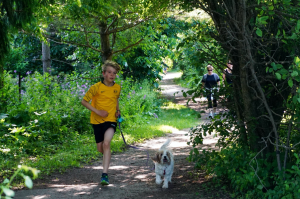 And now it’s mostly about family, running and COFFEE :) …

We love the social aspect of parkrunning and look forward to seeing the fellow park runners and their families every Saturday. Eventually, the parkruns became mostly about the anticipation of catching up with parkrun friends before the parkrun or over a cup of coffee. Even now during the pandemic we continue with the tradition and have been catching up for a weekly virtual coffee over Zoom.

We look forward to re-starting the parkruns and real (not-virtual) coffees soon!

How To Incorporate Mindfulness In Your Running Life

Content from: Heather Colasuonno, Saucony Canada Ambassador   Our muscles are stiff from yesterday’s workout. Breathing is laboured before we settle into our rhythm. That nagging ache in our knee from an injury years ago puts all our focus on our body when we’re out for a run, or even before we set foot on the…