parkrunning from Canada to Russia

In 2007-2008 Jennifer Laughton flew halfway around the world at the age of 17 to do a Rotary Youth Exchange program in Siberia, Russia, in the city of Krasnoyarsk. Ten years later, when she went back to visit my host family and friends she was delighted to find out that Krasnoyarsk had parkrun! It just so happened that they had started a couple weeks before Jennifer arrived and it meant she got to be there for their third parkrun.  Jennifer was their first parkrun tourist! Having reached out to us she said it was an absolute delight to be able to run parkrun in her “Russian home” after having been involved with it in Canada. We are delighted that Jennifer shared so many photographs, including the one above as she made sure to snap a pic of us with her Canadian flag. Thank you, Krasnoyarsk Naberezhnaya parkrun!

The following is an extract from an interview Jennifer had for the Russian blog in October 2018:

Not so long ago, parkrun Krasnoyarsk, which started this year thanks to the support of the Presidential Grants Fund, spoke about the first foreign tourist who attended this race, and she was Jennifer Laughton from Canada. her about life, parkruns and about Russia. 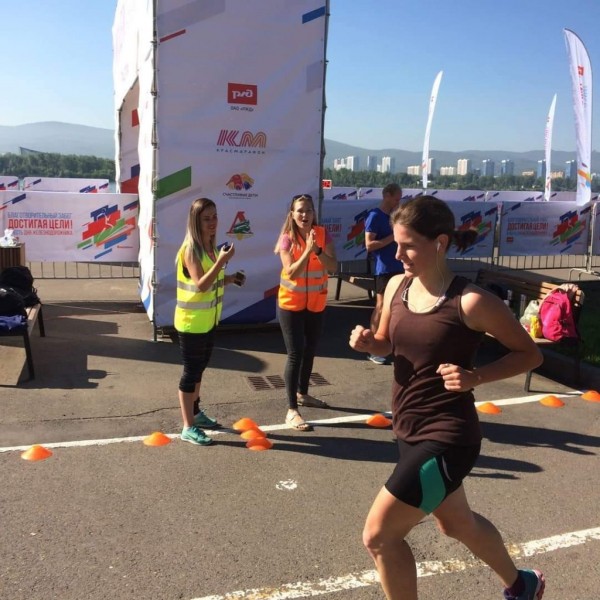 Author (A.): Hello Jennifer! Thank you for agreeing to be interviewed for Around the World. Please tell our readers about yourself. We heard that you are from Canada. When and how did you first come to Russia? How do you like our country?

Jennifer (Jen.): Hello! My name is Jennifer, I am from New Brunswick (New Braunschweig) in eastern Canada, but I live with my parents in the capital – Ottawa.

I first visited Russia in 2007-2008. under the Rotary Youth Exchange program. For a whole year I lived with a Russian family in the city of Krasnoyarsk. I went to school, studied Russian, studied culture, and also traveled across Siberia, visited Moscow and St. Petersburg.

Since then I have returned to Russia twice: for the New Year and Christmas holidays in December-January 2011-2012. and this summer – in July-August I went hiking.

The year that I spent on the exchange in Krasnoyarsk is unforgettable. It was great, although very difficult, to learn Russian, and I just fell in love with the Lube group. I spent all my free time exploring the city. I also love winter very much, and spending the winter in Siberia is really cool! When I tell someone that I was in Siberia, they ask me how I survived there in winter.

Every time I return to Russia, I learn something new, meet new people. I have a master’s degree in physical anthropology, osteology (note: the department of anatomy, devoted to the study of the skeleton, the structure of bones), and this summer in the Krasnoyarsk Museum I met a Russian woman-osteologist and watched her work with great pleasure. Next year I plan to defend my doctoral dissertation, and my work will be based on the materials that were collected on the coast of Lake Baikal. Russia has played a huge role in my life, both personally and professionally.

I started running parkruns when I was living in the United Kingdom, and later, when my family and I returned to Canada, my mom opened a parkrun here in Ottawa. And how surprised I was that parkrun appeared in Krasnoyarsk. I just had to run it.

I had the honor of becoming the first parkrun tourist in this city, now I must definitely run a parkrun in Novosibirsk as well. I also heard that there should be a parkrun in Yakutsk, and, of course, I would like to run the Moscow parkruns.

A .: Jennifer, thank you very much for such a detailed answer. By the way, the parkrun in Yakutsk has already been launched, and now the guys are running on the first snow. You should definitely try it. Is there anything that surprised you in Russian parkrun? Maybe some interesting traditions that are not in Ottawa?

Jen: Basically, the parkrun in Krasnoyarsk is no different from the parkrun in Ottawa: the briefing, volunteer introductions, post-parkrun treats and communication are very similar. I knew that they were waiting for me at the parkrun, which means that even someone who does not speak Russian could understand what was happening. 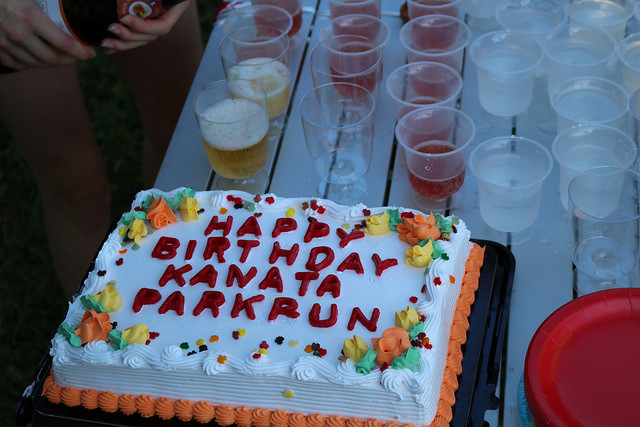 I really liked the parkrun in Krasnoyarsk. The last time I ran along the Yenisei embankment was ten years ago: on Victory Day, May 9, 2008, there was a school relay race, in which my Lyceum No. 11 also took part.

A : You said that your mom opened a parkrun in Ottawa. Does that mean she’s an Event Director now? Please tell us about your home parkrun.

Jen: Yes, that’s right, my mom is the event director of Kanata parkrun. She opened it with my dad and our first race took place on September 16, 2017 (right on my birthday). 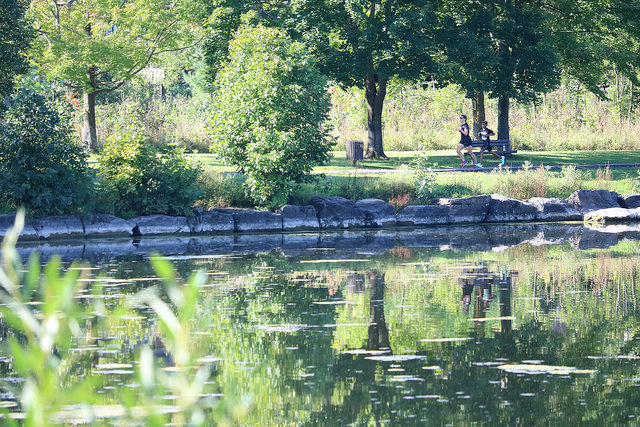 We run around Bobrovy Pond on the eastern outskirts of the city. The trail is mostly flat with small inclines on one side of the pond and goes like this: first we run to the north side and return, then to the south and back. It resembles a fork with two teeth. 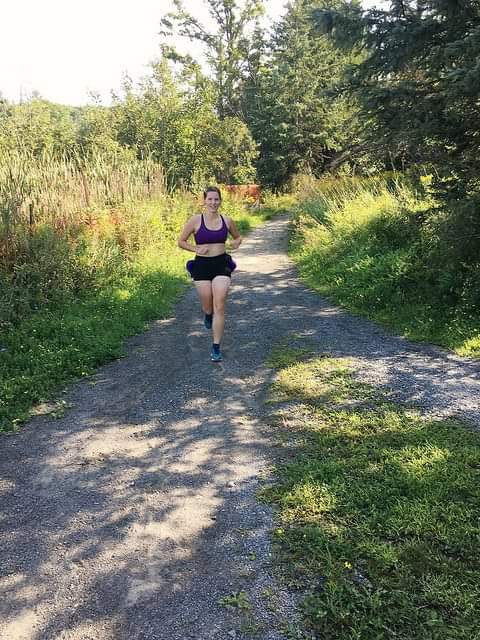 But we took this photo with the flag a week after my jog in the Krasnoyarsk parkrun: I sent it to Krasnoyarsk with warm greetings. 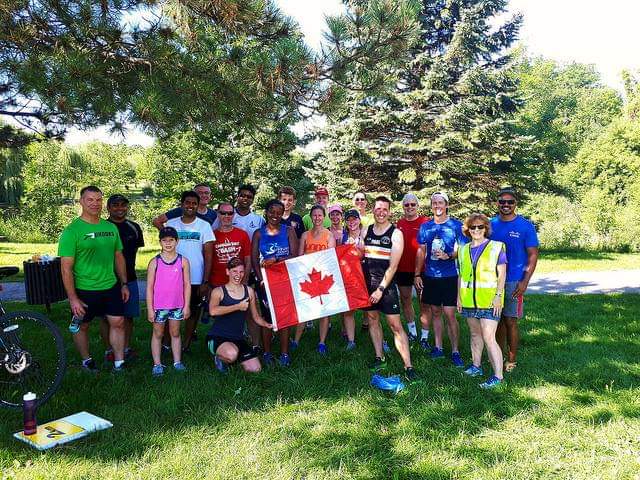 You can probably imagine that in winter the entire track is covered with ice and snow, but we continue to run – usually along the paths that local dog owners have laid before us. In autumn, the trees in our park are painted in bright colors, and we run, listening to the Canadian geese in the pond.

In summer we have a heat and a lot of insects, but in spring it is cool, but very beautiful – everything blooms. I’m sure it’s the same in Moscow. 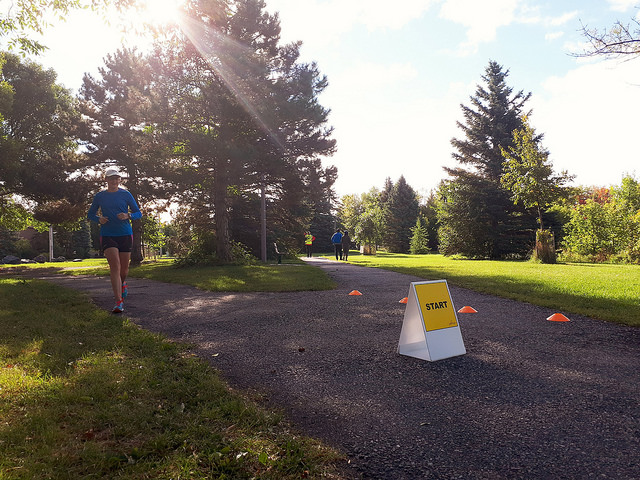 A: I sent you photos from the park on January 7, 2017, when it was -31 degrees in Moscow.  Many runs were not canceled, people still ran. By the way, having looked at the Kanata parkrun page, we noticed that the volunteers do not forget to upload reports (and in two state languages ​​at once – English and French) and wonderful bright photos from the past races.

Jen: Thank you guys, I wish all parkrunners in Russia a wonderful and not too cold winter! Hope you never have to cancel your races due to too cold temperatures or snow! Enjoy the winter running season!