Mike Titchard used to focus on beating his own parkrun time each week. Then he found that the greatest joy came from supporting others to achieve things they never thought they could, and it gave him a whole new perspective.

Six years ago I had just finished a 12 week fitness course set up by our local rugby club. As the course was coming to an end, we were all looking for things to do to keep us exercising. Somebody found an article on parkrun, there was one in our town, so we decided to give it a go.

My first parkrun was at the Warrington event in the UK in May 2015. I went along with no preconceptions. I noticed, after finishing, that as much respect, if not more, is given to those finishing towards the end, rather than the speedy folks who finish at the front. I have learned, first hand and through experiencing parkrun with others, that the effort and achievement is felt just as immensely, no matter where you finish.

I quickly became a parkrun regular and it was parkrun that gave me the confidence to try longer distances, 10ks and then half marathons, and I joined Warrington Running Club.

In our early parkrun days my friend Dave and I were like Roadrunner and Wile E. Coyote, chasing each others’ 5k time. One of my most memorable parkrun moments was when my friends all helped me achieve my parkrun PB. It took support and teamwork of the highest order.

Another memorable parkrun is when I ran blindfolded, guided by my daughter, for Multiple Sclerosis awareness. I know the route well but it was still very difficult. It truly gave me another perspective. 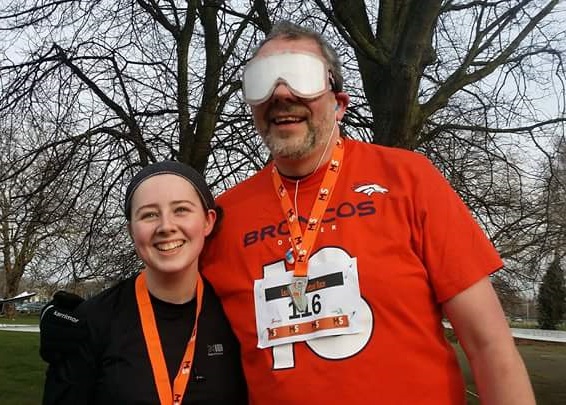 When I first became a parkrunner my goals were all about achievement and beating my 5k time, but now, it’s about enjoyment.  When training for my second half marathon I learned to run slower and further. Unfortunately, in the race itself I hurt my back. Then returning to parkrun, I was recovering from injury, I had also trained to be slower so my 5ks were taking longer.

Then, fate stepped in.  I had friends who had done the recent versions of the fitness course that I had done with the rugby club and they were just starting their parkrun journey. Supporting them gave me a different focus. I got much more enjoyment from helping them to run the whole route for the first time or achieve their first sub 40 min parkrun than chasing faster times for myself.

Six years after we first tried a parkrun, Dave and I still parkrun together, but we no longer chase our times like we used to.

Myself and a good friend Eli set up a running group. Our aim was to be welcoming to those people who wanted to have a go at running but without all the pressure of pace. A number from our group have done marathons and/or ultras but the biggest successes have been those people who achieve something they never thought they would.

I also started to volunteer at junior parkrun and have racked up 25 volunteers so far.

Over the pandemic and lockdowns I’ve not stayed as active as I would have liked. I very much enjoy and prefer to run socially, so running in isolation was basically a “no”. Our Saturday morning group got out when we could (even setting up a few challenges to encourage people) but it’s not the same as a Saturday morning that starts with a parkrun.

As an event I just hope that parkrun can keep giving others the enjoyment and encouragement it has given me.

I like the saying, “Stop trying to meet the expectations of others, aim to simply beat your own”.  It’s easier to do when there are no expectations and that’s what parkun gives people.