Three years on from the launch of parkrun Japan, there are now 29 events spread over a country that is made up of more than 7,000 islands.

Events in the region even helped with the 2011 tsunami recovery project.

Haru is the Japanese word for spring, a time of year that symbolises new beginnings in the land of the rising sun. Traditionally, pupils start their school year and university graduates commence new jobs against a backdrop of blooming plum flowers and beautiful cherry blossoms. More recently, parkrun in Japan gives cause for celebration and optimism at this time of year too as it celebrates its anniversary.

The warmer weather is also pushing up attendances, with a weekly  average of around 40 walkers, joggers, runners and volunteers.

One region where parkrun is having a significant impact is Tokohu, which is home to Chuo Koen parkrun. Following the devastating tsunami in 2011 which killed 16,000 people and destroyed or damaged more than one million homes, around 300,000 people in the region became refugees. The region has suffered greatly since the tragedy and the population is much lower, with Chuo Koen parkrun established last year.

It became part of a tsunami recovery project. As people continue to gradually return to the region, it is uplifting and inspiring to see them socialising at parkrun and reinforcing how parkrun can unite communities. Even in the snow!

While participants at Chuo Koen became the first people in Japan to parkrun in snow, Kashiwanoha parkrun parkrun became the first Japanese parkrun to celebrate 100 events. Kashiwanoh was the second event to launch in Japan in 2019, but was able to stay open more often during the pandemic than some other parkruns.

More recently, International Women’s Day was embraced all around Japan, with Hondajima parkrun really dressing up for the occasion! 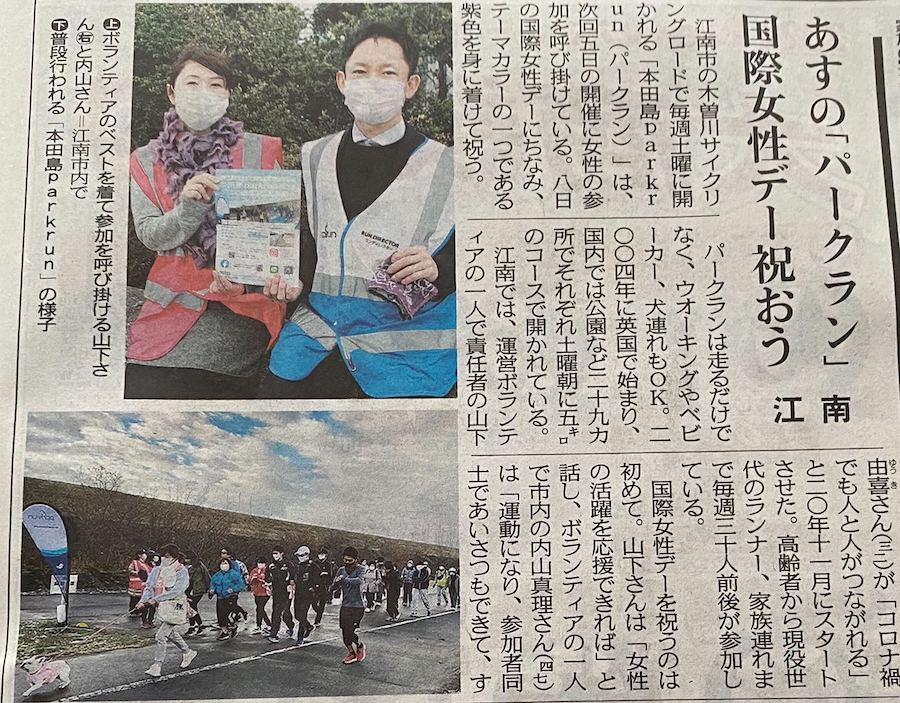 parkrun Japan continues to receive wonderful support from Sumitomo Life, and it is great to see so many of their employees walking, jogging, running and volunteering at parkruns around the country. We are also lucky to have strong support from councils, including Urayasu City which is home to Urayasushi Sogo Koen parkrun.

As the sun sets on the third year of parkrun in Japan, we are really excited to continue expanding the number of events and participants over the next 12 months. Three events will be launching soon and many more are in the pipeline. Who wouldn’t want to parkruns in such beautiful and magical locations!