Falling in love with Erris parkrun

When I was a youngster I spent many happy hours camping with my Uncle, Aunt and cousins from England in the sand dunes on the Belmullet Peninsula. So when 50 or so years later Event Director at Lough Key parkrun, Patricia Kelly, suggested doing Erris parkrun on New Year’s Day I was delighted to accept the challenge.

We set off early and despite several wrong turns and mishaps arrived just in time for the start. The numbers were small but everything about parkrun was there: the community spirit, the fun, the fantastic volunteers. We completed the one circuit course of Cross Lake with a few jogs and lots of walking. The final 2k were into the teeth of an Atlantic gale but we were assured by the team that it was a pretty mild day for Erris. The cup of tea at the end in the sand dunes was very welcome. 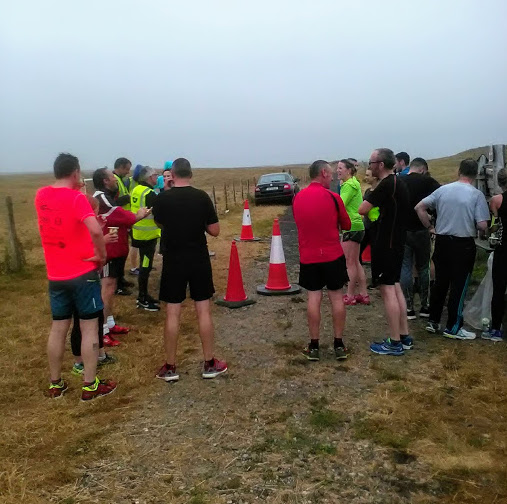 Seven months on, while on holiday in the trusty campervan in Achill, my gaze kept turning to the Belmullet Peninsula across the way and last Friday we packed up and headed through Ballinacroy National Park to take on the challenge of Erris parkrun once again.

Every parkrun is unique and special in its own way but there is something about Erris. Perhaps it is the remoteness of the venue, literally right on the edge of the Atlantic Ocean. The beach is around 2.5k long and on Friday night I walked the whole length of it with the dogs. There was nobody else on the beach. The sunset was spectacular. 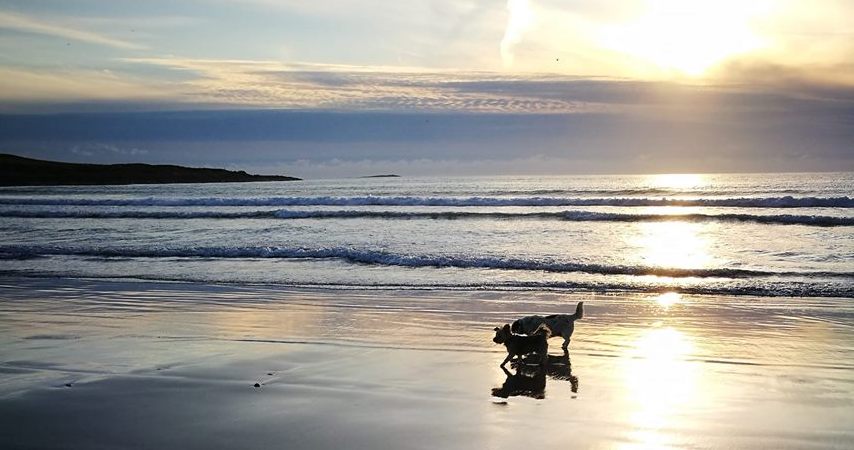 We parked the campervan at the graveyard and settled down for the night. The sun had been shining all day long and Padraig Brogan, Event Director at Erris parkrun had warned me that I had better keep the sun shining for parkrun. Overnight we could hear rain on the campervan and on Saturday morning it was very gray, very misty, very wet. When we pulled up at the start line the kite surfers were already out on the lake and still it rained.

One of the things I love most about parkrun is that you arrive at a venue, there is nobody around, then out of nowhere parkrunners begin to arrive and there is the chat, the fun, the discussions. On Saturday there were several parkrun tourists including myself. A tourist from Naas parkrun told me he would need windscreen wipers on his glasses to negotiate the course. I decided to take my running companion Jack Russell, Jacko, on the run with me as it certainly was not too warm and he was a great hit with the children. 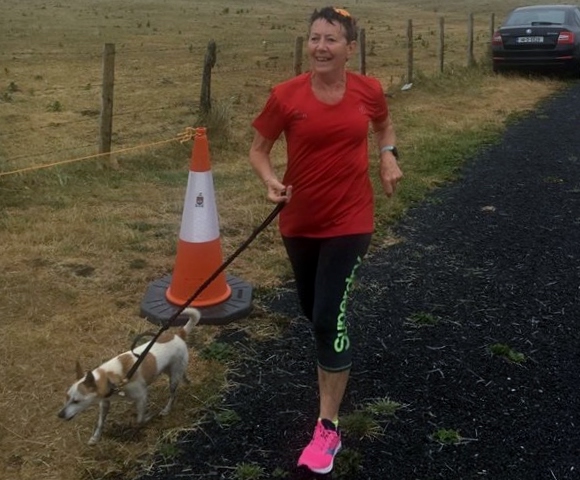 So as with all parkruns we listened to the briefing from Run Directors Padraig, and then we were off and running. Yes it was wet, yes it was windy, but above all it was glorious to be running on the edge of the Atlantic and finishing down in the sand dunes having done a good enough time and enjoying a welcome cup of tea. While I was running around the course I thought, as I often do, about the thousands of likeminded parkrunners who had set off on their personal parkrun journeys across the globe at more or less the same time and were tackling the 5k distance for their own personal reasons and, as always, I felt pretty emotional. parkrun is a great concept, bringing people and communities together to walk or run on Saturday morning.

Darren O’Beirne is the winner of the Vhi parkrun social media competition!

Congratulations to Darren O’Beirne who has been selected as the winner of the #Vhi parkrun social media competition. Darren entered the competition by uploading an image of himself running at Dollymount Strand, Co Dublin and used #Vhi. Darren has won himself a pair of wireless Apple AirPods headphones, which will no doubt come in handy…