Kim Tully and her Siberian Husky Yoshi are regulars at Hartstown parkrun in Dublin. By her own admission, Kim was inactive and looking for ways to make new friends.

Eventually she plucked up the courage to go to her local parkrun and now Saturday mornings for Kim and Yoshi are a whole family affair. Kim tells us more…

The first time someone suggested I join my local Saturday morning parkrun I openly laughed out loud at them!

I was going through a bit of a rubbish time and had been trying to start getting out more. I wanted to let off some steam and meet like minded people, and spend time with my Siberian Husky Yoshi. Yoshi and I were both super unfit and not getting enough exercise.

When my friend mentioned parkrun I immediately made a tonne of excuses, both for me and Yoshi! We aren’t fit enough, we are too slow, I would be mortified having people waiting for us, it’s never going to happen!

But, somehow, I eventually plucked up the courage. I roped in a friend and went along to walk my first parkrun with Yoshi in November 2016. We had a ball!

In time, I convinced my sister to come to a few and even my little nephew started to want to join us. Before long, the Saturday morning parkrun became a fun weekend activity for the whole family. 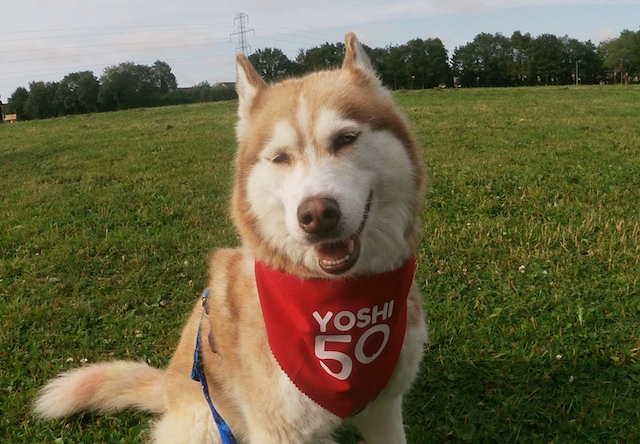 The Hartstown parkrun team are fabulous. They’re so inviting and encouraging and have always made us feel welcome and like we are part of the crew. Yoshi has also been there with me for every parkrun so far. Occasionally we try to chase the last of the pacers, from time to time we tailwalk, sometimes we just walk and catch up with friends.

Thank you parkrun for always being so welcoming and giving us a word of encouragement. Thanks for the cheers as we are passed by the speedy runners and thanks to our new friends who jog and chat with us as we go!

I’ll never be breaking records, but I’m out, having fun, getting lots of fresh air and getting involved in the community! It seems a long time ago that I rocked up at my first parkrun absolutely petrified, but now Yoshi and I are entering every local 5k fun run we can squeeze in.

Dermot Kelly is our Vhi parkrun Hero winner for November