This week it’s Finland, and Country Manager Deri Thomas tells us all about the history of parkrun Finland. 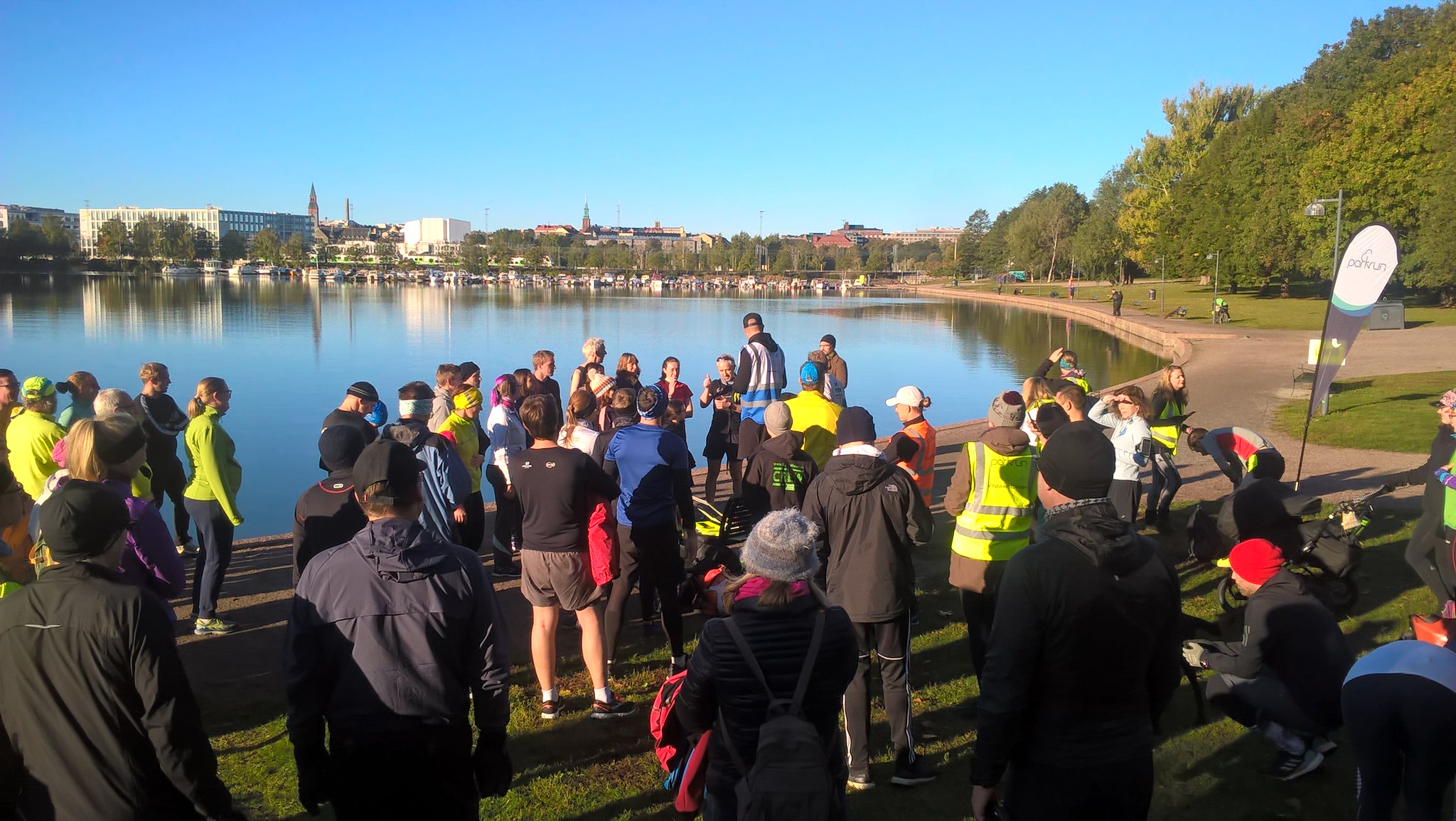 The fact that parkrun is in Finland is largely thanks to the huge enthusiasm and persistence of three of the founder members of Tampere parkrun, Johanna Riippi, Olli Ström and his partner Ulla Sergejeff. Not to be outdone by their neighbours to the West, Finland followed hot on the heels of Norway when they joined the parkrun family in the autumn of 2017 with the first event in Tampere.

Ulla and Olli had first experienced parkrun when visiting their parkrun-mad friends back in the UK, and saw it as their mission to recreate some of that parkrun magic in their hometown. And Johanna, working for a local partnership to make the city of Tampere an active place, and who had separately been enquiring about parkrun as well, was perfectly placed to help realise this dream.

Tampere parkrun was the first to launch, on a drizzly morning, on the 14th October 2017. Right from the start, the event attracted a huge range of participants, from 18 minute runners at the front to the Tail Walker who passed over the finish line almost exactly one hour later.

And we also had the fortune to be visited by local celebrity Moomintroll from the Moomin family, who helped to start the event and clapped everyone over the finish line too! 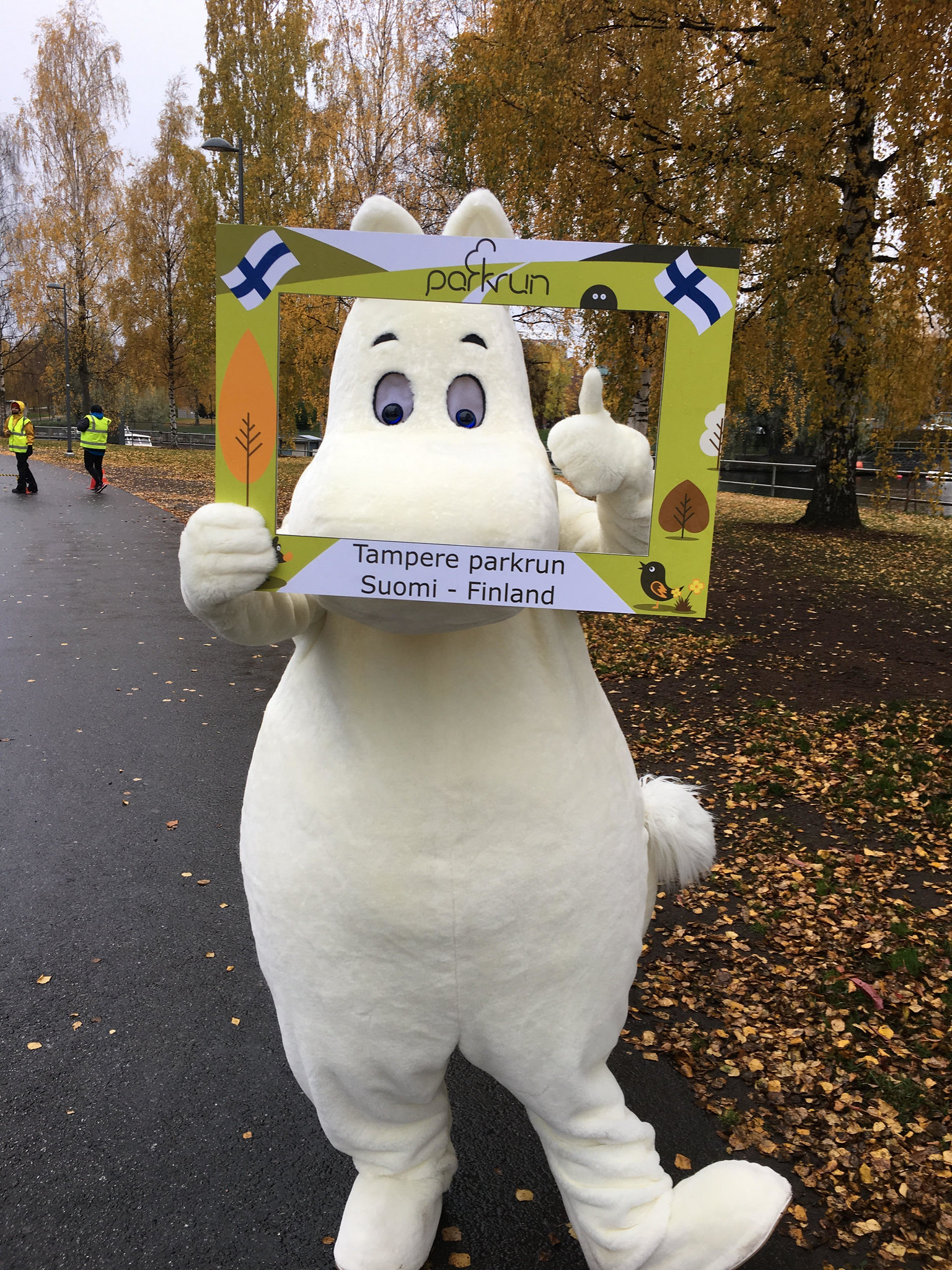 All of the three events we currently have in Finland take place alongside water – there’s a lot of it about in Finland! There is Tokoinranta parkrun in Helsinki and Vääksyn kanava parkrun having joined the parkrun family alongside Tampere.

There’s an amazing contrast between the seasons, and that makes parkrunning a completely different experience depending on the time of year.

We love these knitted socks that one of the Event Directors at Vääksyn kanava parkrun knitted herself! Apparently running in knitted socks on snow is a thing in Finland and there are even knitted socks running national championships!

One of our most regular participants is Jansku, about whom we wrote a story about last year, you can read it here. He’s now closing in on 100 parkruns, which we look forward to celebrating when parkrun returns again to Finland.

Finland is a sparsely populated country but we are sure there must be more locations which would benefit from having a parkrun! We’ve had interest from a number of towns across the country, but haven’t quite got them over the line yet.

We’re really excited about the future of parkrun Finland.

As we progress our plans around a return to parkrun, we have been working with various organisations and stakeholders around the world. While the restart of parkrun events in New Zealand was relatively straightforward due to the virus being largely eradicated there, it is clear that this is not likely to be the case in the…

The parkrun family is made up of 22 countries around the world, and we’ll be taking a closer look at a number of them.   This week it’s the most recent member of the parkrun family, the Netherlands!    Territory Manager for Europe, Deri Thomas, tells us the story behind the launch.   The launch of…