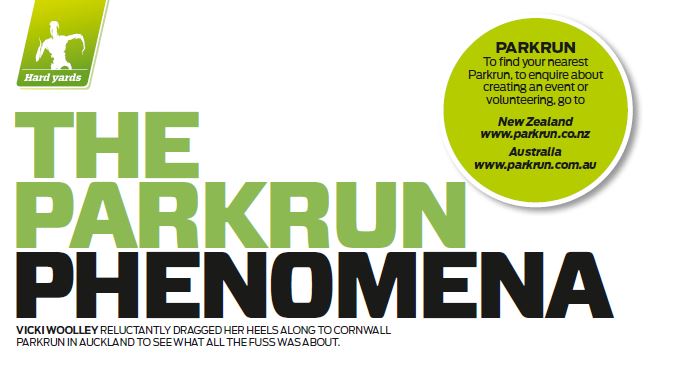 For those who didn’t manage to get hold of a Kiwi Trail Runner magazine last month here is the featured parkrun article, which is easier to read!

It is Saturday, 7.55am and I am wringing my hands with nervousness. I have had a terrible sleep: my skort feels too short and shirt too thin: my calves are clumps of knotted rubber bands. I am standing on a 5km start line and it is my worst nightmare. Give me a marathon. Give me an ultramarathon. Give me almost any trail run, anywhere in the world right now – just not this. I have no idea how to run five flat, fast kilometres.

Key to this story is: for the life of me, I have no idea why anyone would want to. Judging by the sea of happy faces around me, I am clearly missing something.

And that is why I am here. I have come to experience parkrun at the behest of a friend who is adamant it is ‘a thing’ and I am missing it. Paul Sinton-Hewitt started the parkrun phenomenon at Bushy Park in the UK in 2004.

The concept was simple: show up at a local park at a reasonable time every Saturday morning, run 5km with a bunch of mates and grab a coffee afterwards. That’s it. The runs would be timed, held in pleasant parkland surroundings, open to everyone and free.

Sinton-Hewitt could not possibly have envisioned that parkrun would evolve into a way of life for people all around the globe. One of his early disciples – Kiwi Richard McChesney – was keen
to bring the parkrun concept back to New Zealand so Sinton-Hewitt contacted an old running mate who was living in Auckland, Noel de Charmoy.

• Print out your personal barcode

• Collect a placing chip as you cross the finish line: this is scanned along with your barcode

• … You are done. Free to get to kids sports, Bunnings, or have coffee with your running mates. The ‘rock up and run’ concept is so compelling, there is no excuse to not get out of bed on Saturday morning. T – five minutes People are still arriving – that is the beauty of the ‘rock up and run’ concept – with squeals of delight: “Where WERE you last week?” – hugs and thumps on the back. I am still not quite sure why I am here.

Richard Fox arrives in an inflatable Sumo suit – it is Cornwall parkrun’s fourth birthday, and there is close to 100 per cent compliance with fancy dress. Fox is a parkrun aficionado, completing more than 170 events and winning an attendance award at each parkrun ‘birthday’.

He remembers the first Cornwall parkrun. “I knew Noel and Lian beforehand so decided to support what they were doing. There were only around 35 of us the first day. I think it was cold and wet, typical July. We all met for coffee after and the war stories started.

“I remember Michael Rodliffe telling us he had just run the Hillary Trail [74km] in nine hours something. Jaws dropped – that was pretty awesome stuff for a bunch of us. I’ve come to realise there is always some story of inspiration going around, whether it’s a 5km PB or something completely out there.”

We start running and I am all over the place. What pace to start? To run? What is the etiquette – how do I pass someone? I gradually become aware of the prevailing mood and realise I am taking this far too seriously.

The course is an out-and-back: approaching the turnaround the first speedy-beans hammer by, chasing a race and a PB. That’s cool. Behind them a tranche of wannabe-speedy-beans are working hard; pursuing idols, getting stronger and faster.

Then people in groups of twos and threes or more – social groups, happy and comfortable with each other. At the bottom of the only hill on the course I am surprised to come across one of the lean, mean, speedy-beans paused midstride, staring fixedly at his watch. What is his problem? He doesn’t look as though he is cramping. A few paces on he streaks by us – aha! A Strava segment-hunter. A few people laugh – they have figured it out – and that is okay, too. Actually, everything is okay. Fox explains:

“I usually catch the same people on the same spot on the course. Recently it’s been a junior girl who I’ve ‘pulled’ with me through the last two kilometres or so. The first time we did this she got a PB – I think I was more excited than she was.”

I have a vague sense of having drifted into a fringe commune – everyone I speak with uses the same language: ‘community’, ‘welcoming’, ‘inclusive’. Fox tries to explain it to me: “It’s like anything ritual that becomes a club. People come and people go, but the attitudes are usually the same – maybe except for the elites that come for a training run – otherwise, time is irrelevant. It’s not the run per-se, but the time spent with similar mind-sets.

“There are road runners and trail runners: well, now there are also parkrunners. And you are always welcomed.”

Lian and Noel endorse Fox’s last sentiment. “The success of parkrun is largely due to the spirit of community participation and the welcoming of people of all abilities and ages: newcomers and visitors are always made to feel welcome.

The fact that the runs are free removes the pressure of participation and makes it easier to take part and achieve personal goals – it’s not about how fast anyone can run, it’s simply about getting out and having a go.

Each runner/walker, whether first or last, is celebrated because everyone will have their own reasons for wanting to get out and exercise. “Meeting for a post-run coffee to chat and share stories has seen many friendships form through parkrun: especially people who are new to a town – they know they’ll find some like-minded runners at an event and will be welcome.”

Hosting an event each weekend sounds like an enormous commitment and labour of love, but Lian and Noel happily tell a different story.

“Many parkrunners have a sense of ownership for their home event which helps to build the community spirit and volunteer involvement.

The act of  volunteering at an event is key to our culture and the concept of ‘family participation’ seems to flow through to all our regulars.”

The de Charmoys’ passion is evident. “Each Event/Run director has to be a people person, love running and enjoy encouraging others to take part and reach their personal goals – that may be simply completing 5kms or going on to run marathons. Being part of that is a wonderful feeling; the thanks that we receive as organisers and volunteers is enough to want to keep on doing it.”

There had to be a hook – and oh, it’s a good one. Arriving home from parkrun via my son’s soccer game, I am greeted by a congratulatory email. I open it and – oh no – it is filled with delightful statistics that set my running radar into competitive mode:

Your time was 00:25:44. Really? I can run like that? Cool. Congratulations on completing your 1st parkrun and your 1st at Cornwall parkrun today. 1sts! I like 1sts. You finished in 78th place and were the 14th female out of a field of 174 parkrunners and you came 2nd in your age category VW45-49. Blah, blah – wait, what? 2nd in age category?

Well done on your first run. We have set this as your PB. I can do better. Much better. I can beat that – who was it – 1st age grouper, gnash, gnash You achieved an age-graded score of 62.95 per cent. You have earned 87 points for this run, giving a total of 87 points in this year’s Cornwall parkrun point’s competition.

I’m already hooked. I’m hooked and I want to go back, but the reasons are complicated. The competitive side wants to set a PB and have a crack at an age category placing. The relentlessly curious side wants to run every parkrun location in New Zealand. Fox assures me that ‘parkrun Tourism’ is a thing. The social side wants to hang out with old, new and as yet undiscovered friends – like the guy in the Smurf suit. What I do know is that parkrun is a thing.

In line with the Government’s Alert Levels 3 and 2, we have taken the decision to suspend all parkrun events across New Zealand with immediate effect.   We know that this message may be difficult as parkrun has only been back in New Zealand since July, however we do hope this closure will only be…