Megan Costello is the ED of Gisborne parkrun, which started in May this year. It’s situated in the far east of the North Island and is the first parkrun to see the sun worldwide! Megan tells us how she became involved in parkrun and setting up this picturesque parkrun:

I initially became involved with parkrun in Batemans Bay (Australia), first as a volunteer to help get Batemans Bay up and running, then as a regular runner, then as a regular Run Director.  We moved back to NZ a year ago with one of my main goals to establish parkrun in Gizzy.  My favourite aspect of Gisborne parkrun is the families that have become some of the hard core regulars – there are so many families who do it together, across multiple generations from some really young kids to the older tweens who are doing some amazing running.  We’ve had one family fill (almost) all of the volunteer slots one week, and as our start and finish is at a playground it’s wonderful to see them all playing together while their parents have a catch-up.  A Fight for Life Ed charity boxing group joined parkrun as part of their training and really upped the pace and helped other runners improve their PBs!

The course is a modified, mostly flat, out-and-back route along a shared walk and cycle way that takes you from the beach up along the river and past downtown with some eye-catching murals along the way. Our course record has (unofficially) been set by local triathlete Taylor Reid.  It was wonderful to be a part of his training prior to his gold medal win on the Gold Coast! 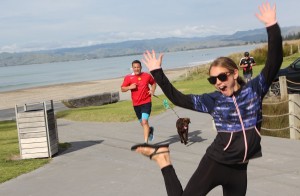 Our most prominent land mark is probably the finish line – because you have to run past it (with only 800m to go!) and there have been a few groans as people come by the flag before heading out onto the boardwalk for the final section.

To any parkrun tourists coming to visit we may be a smallish parkrun, but there’s lots of space to hit your stride.  It’s mostly flat so you can get a good pace as long as the wind behaves.  The scenery of the beach and river is lovely and once summer arrives, you can go for a post parkrun swim in the sea.

At the moment only a small group of us manage to meet for coffee at Ormond Road cafe.  This parkrun tradition has yet to catch on as most of the volunteers and runners usually have to head off to take the kids to sports. However, with the holidays approaching we look forward to more locals and visiting parkrun tourists to come along and join us!

We have a number of interesting parkrunners   There’s Debbie (DJ) Page who joined us at event #2, saying she just wanted to start to get some exercise, and by event #26 (or so) she was able to complete the Gisborne Quarter Marathon which was the longest distance she’s ever done before.  There’s also Kara Hull who just keeps getting faster and faster and is blowing us all away, especially as he has a knack for getting PB’s on the days when the rain is blowing sideways. Kara joined us at event #1 and is one of our most enthusiastic supporters along with his wife Margaret and son Christian.

While we’re a small parkrun, the core group of regulars has really developed a brilliant bond and connection.  The mood is always fantastic, maybe even more so in the rain and wind.  There’s a great atmosphere of support and we enthusiastically celebrate everyone’s achievements. We look forward to growing this community in 2019 as we welcome and encourage more local parkrunners!

One unique thing about Gisborne is that it’s known for being the first city in the world to see the sun at the start of the New Year and celebrates with an annual music festival (Rhythm and Vines).  We’d love to become THE New Year’s Day event on the bucket list for parkrun tourists and we’re really excited about hosting our first one this year. Bring on Jan 1st 2019!!

The New Zealand Government has agreed in principle to move to Alert Level 1 at 11:59pm on 21 September, for all locations other than Auckland. Should this date remain unchanged when the final decision is announced, we intend to reopen events in New Zealand, with the exception of the five events in Auckland, on Saturday…