Dunedin parkrun will be celebrating its 5th anniversary on 12th January. The first event on 11th January 2014 had 68 participants…

There has been steady increase is numbers every week, and managed to break the 200 participants for the first time at our 250th event in October 2018!

We are very lucky to have access to the Botanic Gardens, and while that does mean that dogs are excluded as well as buggies/strollers (for safety reasons), the seasonal changes and views certainly make up for it.

The meeting point for Dunedin parkrun is in the middle of the lower part of the Dunedin Botanic Gardens. Easy to find – just head towards the buildings (the Winter Garden Greenhouse, Information Centre and Croq-O-Dile cafe) and you’ll spot the team setting up and the parkrunners starting to loiter around.

The stainless steel worm sculpture in this area is a favourite for kids who like to climb on it and sometimes fall off (much to the horror of their parents). This is where the pre-run briefing takes place and there’s access to toilets if needed. 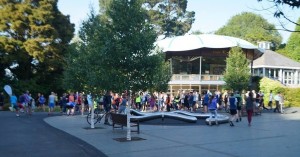 The start line is also in this area and as you head off running anti-clockwise on the path around the lower gardens, you’ll first go past the duck pond (where the ducks sometimes skate on ice in the winter), then the grassed area in front of the band rotunda which is also where the finish line is set up. Following the path to the left takes you between the Knot Garden and an amazing seasonal border which looks different nearly every weekend.

At the gates (where there is a water fountain if you need it) you’ll head left again (don’t leave the gardens). This will lead you through the rose gardens and towards the Leith River.

Before the bridge, head left again down a narrow earth/gravel track – best to stay single file here so there is space to pass (or get passed). Turn left again before the next bridge and this will take you back to the start area.

As Dunedin is a 2×2 looper (twice around the bottom loop, then twice around the top loop), you repeat this section (check out the statues and sculptures you may have missed the first time). Then just before you get to the start area again, head right over the bridge at Croque-O-Dile cafe and right again which will then take you along the undulating gravel track alongside the river. 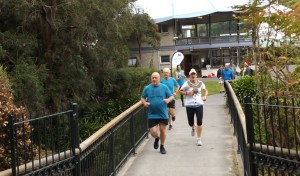 Before you get to the gates at the end of the track (where there is also a set of swings), you’ll spot some cones on the ground which will lead you across the grass to Dunedin’s famous “Stairs of Despair”.  Here you have about 100m uphill on a narrow but well-formed earth track which does have some stairs. The view at the top is fantastic and well deserved!

When you have recovered, head over the grass to the left trail which will take you through the bush section until you come to a junction of several trails. Keep going straight but run on the right-hand-side (this means that the fast runners can go passed in the middle of this out and back section). This is another slightly hilly section, but soon you’ll be at the turnaround cone and be heading back down (again staying on the right).

When you are back at the trail junction, head down the hill towards the bridge and repeat the loop.
Finish by crossing back over the bridge after the second loop, turning right and crossing the line on the green after the duck pond. 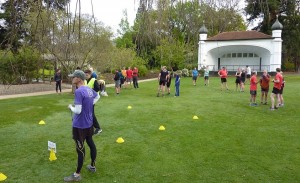 Of course, all that hard work deserves coffee and cake and the Croque-O-Dile cafe is kind enough to open early for us on Saturdays. Visitors might like to stay a little longer – there’s a playground near the finish line, free duck food available at the information centre, and in the upper gardens (past the turnaround cone) there is an aviary with great selection of birds, including some cheeky keas.