Anderson parkrun will celebrate its 3rd anniversary next Saturday. It has grown over these years and  become a welcome feature in the Napier community thanks to the support of the wonderful team of volunteers and the Run Directors. Special thanks to Trish Cummins who became the Event Director last year and has been an excellent ambassador for this parkrun!

I began parkrunning at Anderson parkrun’s second event, having been most disappointed to miss the first one. I have missed very few since and have been Event Director for the last year. I like the non-competitive, social atmosphere and I have enjoyed watching our event grow. I also enjoy seeing the friendships which develop among parkrunners, and I love welcoming first-timers and parkrun tourists. 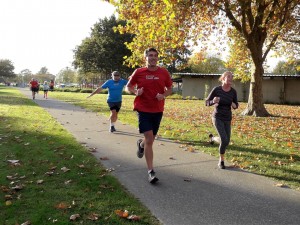 Anderson Park is the site of a former race-course. The Council acquired it in the 1960s and began developing it as a park. A local nursery owner (Mr Haskell Anderson) left money in his will for the provision of trees, so there are many fine specimens around the area. More have been planted in the last year.

It is a very picturesque, tree-lined course. There are two laps on a flat, meandering concrete path around the outside of the park and then a small inner lap which crosses over two footbridges. The most obvious landmarks are a number of ponds, the largest of which is inhabited by ducks, geese and swans. At certain times of the year, extra interest is provided by ‘swan-swerving and duck-dodging’ (not to mention what they leave behind)! The ponds are linked by a stream; hence the need for the bridges. We refer to them as ‘the blue bridge and the brown bridge’. 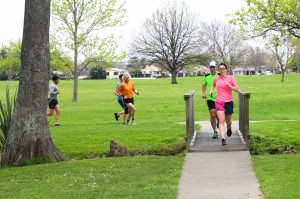 A ‘parkrun tourist’ might be interested to know that the park is beautiful (especially early in the morning) and the course is flat. There is an amazing, new all-age playground beside the start/finish area, as well as toilets and a large carpark.

The local New World supermarket is just across the road from the park and we have become part of the furniture at the Florian Café there on Saturday mornings. Some parkrunners are known for their preference of a post-run treat to accompany their coffee or tea. Some even prefer ice-cream or gelato. 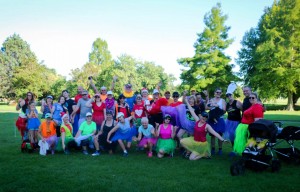 One of our interesting regulars is Mike Leary who has been running for 60 years, despite being told after a motorbike accident 35 years ago, that he would never run again. He recently turned 75 and he still runs and goes to the gym every day. He has done over 100 Anderson parkruns and several more at other events. He holds the M70-74 and M75-79 records for this course as well as the M75-79 record at Rocks Riverside in Australia. Mike is a former maths and PE teacher and he takes lunchtime running groups at a number of schools. His recent golden wedding anniversary fell on a Saturday so of course he began his celebrations at parkrun!

We try hard to be good community citizens. A year or so ago, we were delighted if 50 people turned up, now 100 is normal and we’ve reached close to 140 on a couple of occasions. Because of the increasing number of parkrunners, we call our marshals ‘public relations ambassadors’ because part of their job is to talk to other park users and explain why we’re there. One of the park’s neighbours recently came over to tell us how much she enjoys watching parkrunners every Saturday morning. 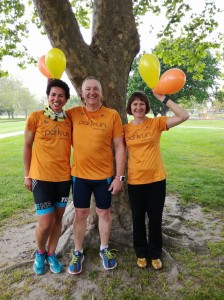