A parkrun Tourist in New Zealand

From March 3 to March 23, my husband Brian and I explored the North island of New Zealand.  Our first destination was Whangarei Heads where Brian’s cousin Joanne runs a yoga studio out of her home overlooking Parua Bay.  Next to her house is a pasture where cows graze serenely.  From the guest room I would watch the beloved bovines every morning, then look to the sky above where the sun was breaking over Mt. Manaia (Manaia means Guardian in Maori).  Perched on top of Mt. Manaia are the Whangarei Heads, which are massive rock structures, born from volcanic eruptions 20 million years ago.  Their shapes reminded me of the stone faces of Easter Island, and from their vantage point a quarter mile above Parua Bay, they have been keeping watch throughout the eons.

The city of Whangarei is about a half hour drive from Whangarei Heads.  On March 9, Brian and I were up before the cows in order to drive to the start line of the Whangarei parkrun, located in a paved area under the Te Matau a Pohe Bridge (which means “The Fishhook of Pohe” because it’s in the shape of the traditional Maori fishhook).

The sky was overcast, and in the dim morning light the parkrunners were starting to gather.  The parkrun concept is simple; register online, print off your barcode, and you’re good to go at any parkrun location, on any Saturday, around the globe.  Your barcode gets scanned after you cross the finish line and your 5K result goes into the parkrun world-wide database.  Wearing my Prairie Inn Harriers singlet with “Victoria, BC, Canada” in big white letters, it wasn’t hard for people to clue in that I was from Canada.  The volunteers waived me over to the guest book, pleased to have their very first Canadian tourist sign in.  Wishing to make a good first impression, I asked if I could sign after the run, in order to make a fitting comment about my Whangarei parkrun experience.

By 8:00, 161 parkrunners had gathered under the bridge, and Whangarei parkrun #164 was underway.  We charged up the ramp and then took a very tight left U-turn onto the bridge, with the lone Canadian runner going “Oops, sorry, sorry” every time she came close to bumping elbows or clipping heels.  After the bridge crossing, we were directed across a grassy section which joined up with the Hatea Loop trail.  Near the skateboard park we made another U turn and ran back across the Te Matau a Pohe Bridge, took another sharp turn down the ramp, then continued past the start line to run along the waterway.  We crossed the water again at the Kotuitui Whitinga swing bridge and continued to the Art Gallery where we made yet another U turn, back for another swing across the swing bridge, and then the final 450m flat section back to the start/finish area.  By the time I crossed the finish line, I knew what to write in the Guest Book.  “Keep Left, Look Right, and SMILE!” summed up my Canadian experience of running on the “wrong” side of the road.

Soon after finishing, I spied a fit-looking senior lady doing her cool down and I asked if her name was Judith.  Yes, indeed she was Judith Stewart, the Whangarei course record holder in the F70-74 age group in a time of 23:44.  Today she ran 24:10 to finish a full 1:31 minutes ahead of my sorry Canadian effort.  With a bit more schmoozing and celebrity-spotting, I was able to connect with Judith Bradshaw, another age-group extraordinaire who topped the VW 65-69 category in 24:33.  Brian snapped a photo of me with “The Two Judiths”.  There we were, VW70, VW65, and VW60 finishing in that order.  The two elders showed the VW60 how it’s done.  My motivation now is to try to run as fast as an VW70, or VW65 (maybe changing my name to Judith might help). 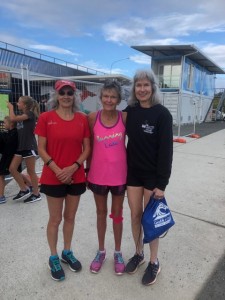 Back in Whangarei Heads, Joanne continued being a great host, and during our five days there we met many of her friends and enjoyed meals, music, wine and laughter together.  We learned that “Whanau” means “family” in Maori, and our time spent with Jo’s friends was a true expression of that meaning, as we were warmly included in the Whangarei Whanau.

On March 11, after saying good bye to our new family, we began our exploration of the rest of the North Island in our rented camper van.  We saw beautiful beaches, pastures and forests.  However, we couldn’t help but notice a vast amount of road kill along the way.  New Zealand is overrun with possums, and the result is that they get run over.  For every mile of road that we drove, there would be two or three dead possums (a-possum-ately).

On Friday, March 15, as we were arriving in Taupo, we heard the devastating news of the Christchurch mosque shootings.  As Canadians travelling in a country where we were greeted warmly everywhere we went, it was crushing to realize that hatred still festers in the hearts of some people who cannot accept differences, and that guns can easily fall into their hands.  New Zealand turned into a nation at mourning, and reeling from the reality that violence and racism still exists in their beautiful country.  I was so saddened by the horror and senselessness, that the thought of participating in the Taupo parkrun the next morning lost its appeal.

However, dawn brought new hope.  The Taupo parkrun starts at 2 Mile Bay on the shores of Lake Taupo, goes south for 2.5k along a path to 4 Mile Bay, and returns to the start/finish line.  Before the start, 51 parkrunners bowed their heads to observe the tragic loss of life from the day before.  In addition, there was another moment of respect for a fellow New Zealand parkrunner who died of a heart attack soon after finishing a parkrun from the previous week.  So much grief and sadness, yet the run still started at 8:00, as always.  Of all the 27 parkruns in NZ, the Hagley parkrun in Christchurch was the only one that was cancelled.  Kudos to the Kiwis for knowing how to pick up the pieces and keep moving forward.

Our final week in NZ was spent touring Napier, Gisborne, Rotorua and lastly Auckland, where Brian and I battled it out to a tie finish at a mini-golf bar.

On March 23 we flew from Auckland to Brisbane, Australia, where we discovered that our connecting flight to Vancouver would be delayed by 9 hours.  The prospect of having to hang around an airport for 9 hours, followed by a 14-hour flight, with no connecting flight out of Vancouver to Victoria until the following day made me feel like Dorothy stuck in the Land of Oz, but without a pair of ruby slippers to click together.

Well, at least I had my laptop.  Upon checking out the Clover Point parkrun website, I learned that Clover Point (Canada) is the most Westerly of all the parkruns on the planet, which means that the Clover Point parkrunners are the last to cross the global 5K finish line.  &nbspConversely, the parkruns in New Zealand are the most Easterly, with the parkrunners lining up at the start line a full day and a half earlier than their Clover Point counterparts.  Further obsessive checking of parkrun results for March 9 and March 16 showed that on March 9, my overall finish in the F60 category out of all the 27 parkruns in New Zealand was 3rd, and on March 16 I finished 6th.  Therefore, it takes an early start to the day (and an early time zone) to finish among the top F60 parkrunners in the world.

My journey through NZ and my first experience as a parkrun tourist broadened my perspective on running.  parkrunners are connected by a database which records results from every nook of the world where parkrunners gather to enjoy the simple act of running 5K together, but the connection goes deeper than just the swipe of a barcode.  As a parkrun tourist, you are readily welcomed into every parkrun you visit.

The human race has a long way to go towards achieving a world where everyone is connected and accepted like family, but starting the day with a parkrun, either as a volunteer or runner, is a small step in the right direction. – Wendy Davies, Clover Point parkrun, Canada