New category this week is parkrun seal of the week! Many thanks to Glynis for sending through this delightful, little picture!
Lower Hutt parkrun on 29th June, had a unique and unexpected visitor on the bank of the Hutt River, quite close to the finish area of our parkrun. A young seal was spotted by some sharp-eyed parkrunners  just down from our finish area.
It would have at least 4 kilometres upriver from the river mouth and Wellington harbour coastline, so a long way from home. The nearest seal colony is at Turakirae Heads on the harbour’s eastern side, some distance from where this seal ended up. We hope it had a safe journey back out to sea.
Here are some official parkrun photos of our visitor .  The last photo shows our finish area, the seal was down in the river just across the footpath. (Taken by me as parkrun photographer that morning) – Glynis Ng, Lower Hutt 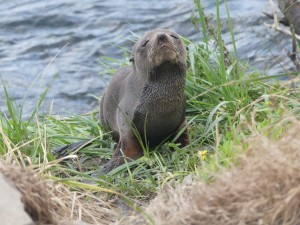 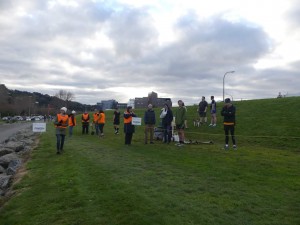 I ran another new parkrun in Japan this weekend.  A bit of a smaller one further out from Tokyo called Kashiwanoha.  Nice group of locals and actually met Erica Minter, a parkrunner from Tauranga there! She, my friend and I were the only non-Japanese there besides a British guy that lives near the park! – Chris Seymour, Queenstown 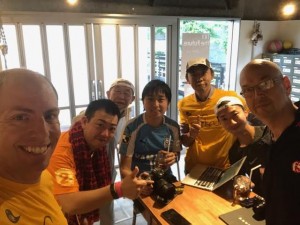