Tears of pride at the ANZAC spirit

71-year-old Australian parkrunner Bomber Hutchinson (right) served with the 3rd Cavalry Regiment in Vietnam from February 1971 until March 1972 driving an Armoured Personal Carrier. Bomber explains why this year’s improvised ANZAC Day commemorations had a profound impact on him, and why he believes driveway services could become a permanent fixture for many Australians in the future.

Vets need Vets. ANZAC Day gives us a chance to get together and talk, laugh, cry or whatever. It’s a day when we get to hear the bands play and we march again. The precision is not there like it used to be but the memories are and they come flooding back, both good and bad. Then there is always the roll call – who couldn’t make it and who has seen their last ANZAC Day.

This year was different, but in a certain way was the most profound experience I’ve had on ANZAC Day over the past 50 years or so.

Normally I attend a dawn service, march later in the morning and then attend the RSL. I have commemorated the day in most states, quite often in a town where army mates of mine live. Sometimes there will be a group of us descend upon the town. When at home on the Gold Coast my three children (adults, or so they say!) and grandchild join me if they are about at that time. My wife Lesley is always there, her late father was a Prisoner of War in Changi during the Second World War. Some drinks and lunch always follow, in past years late nights were common but these days it’s more likely I’ll be having a nana nap!

Commemorating ANZAC Day is a lifestyle event for me. It is engrained in my mind and body to participate. Just the fact that we get the chance to honour those who served before us or with us and after us is the driving force for me. When you hear of the horror of some people’s traumatic wartime experiences, having visited Changi and seeing Des O’Sullivan’s name (my wife’s father) in the the roll book, it makes me feel that I had it easy.

After hearing that ANZAC Day services would be cancelled this year, I knew there would still be commemorations of some form. Sure enough the driveway service caught on, as did other ideas – I knew the Aussies and Kiwis wouldn’t drop the baton.

My running mate Gary and l decided to meet at Burleigh Heads Bowls Club, next to the park where I normally mark ANZAC Day, at 5am. We ran north then returned at 5:50. I ran wearing my miniature medals as my big gongs were to heavy to wear running!

By 6am there were about 40 people standing in the park silently with at least ten metres between each of them. Not a word was spoken but right on the hour a nearby phone played the last post. Then everyone quietly walked away.

Driving home was just amazing. First I passed a high rise unit block with the residents all with candles. Further on were more people and young children, and my eyes began to water with pride at the Aussie ANZAC spirit. Further on in the rural area near my home were more driveway dwellers, which made my eyes even wetter, and when I made it home I let the emotions really flow. This was a fantastic commemoration and I hope we keep the driveway service going forever. People who cannot make it to the service because of health, having young kids in bed or for a whole variety of reasons, can light up the dawn in a way that is personal and comfortable for them.

I’m a big believer that simple ideas can lead to big things. Before parkrun started, I used to run an 18km loop from my house with a group of six regulars. On Strava it’s known as ‘Bomber’s Loop’. Back then, one of the guys in the group was named Tim Oberg and he was always talking about this event he was trying to set up in Australia called parkrun.

As we all know, parkrun did come to Australia and I loved it immediately. Importantly, parkrun has helped me to manage my PTSD. I also love going away with my camper trailer on Friday nights and staying in a town that has a parkrun. To be able to take part in a free 5k with local people in so many different places is magic, and helps me to stay happy and healthy when I’m on the road. Keep up the great work parkrun. 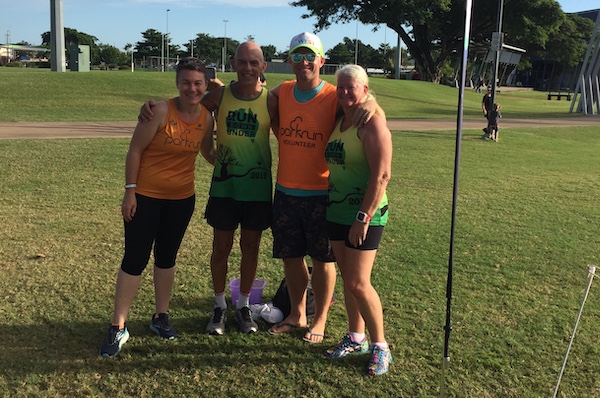 School of parkrun Class of 2020

For the past 17 weeks, the School of parkrun has kept our young parkrunners entertained with daily tasks, covering English, Science, Geography, Maths and Art.   We have loved seeing all of our student’s work and want to say a huge congratulations to the School of parkrun class of 2020!   Each morning we’ve set…