Vanning All Over NZ

When you live in a motorhome you can travel to lots of parkruns.

But even better, while you’re not part of a permanent community, you find you’re part of the countrywide running community.

Lee is from Brisbane, Australia. Carly is a Kiwi with family in Wellington. They have three kids – Eli, 11, Hayley, 10 and Nathan 8 and until the end of 2016, lived in Australia.

“We’d planned on living in New Zealand for two years before heading back to Australia. But at the end of the two years, we bought a motorhome instead,” says Carly. “I wanted to do a gap year, home school the kids and see other parts of New Zealand before leaving again.” 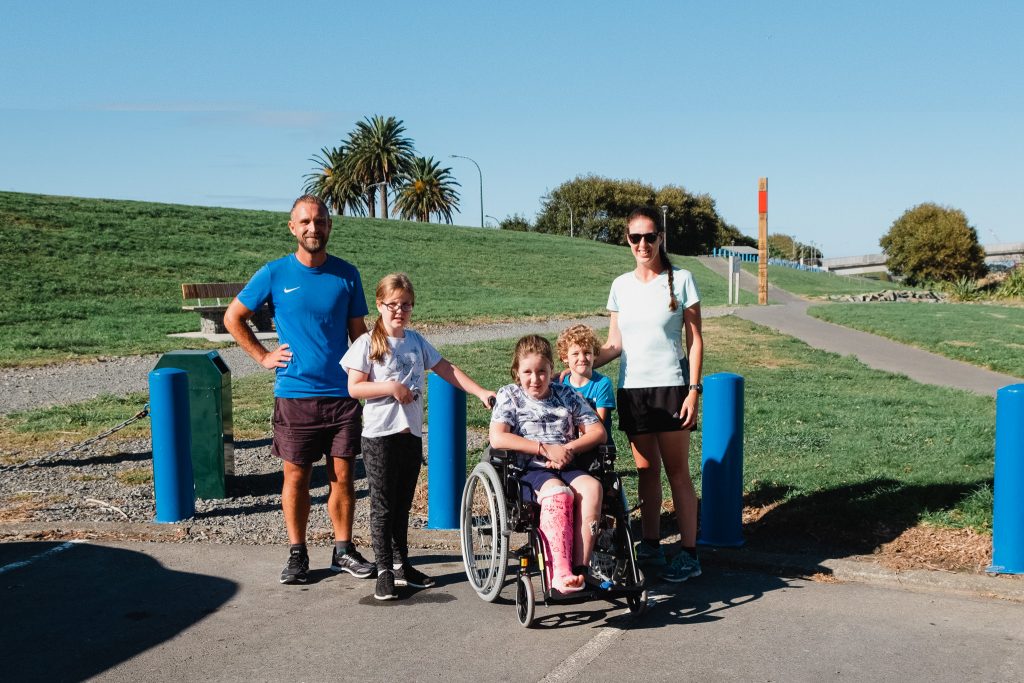 Travel plans were made around running events, Lee likes the trails and Carly the road ones. It means each gets to run while the other parents. Factoring in parkruns was an extra bonus.

“We thought it would be cool if we could tick off all the North Island parkruns south of Auckalnd. We started seeing some familiar faces as parkrunners travel.”

They’ve been to nine parkruns in the North Island, though they very rarely get to run the same one at the same time.

We’ll roll back to when they started running. In 2018 Carly entered Wellington’s Round The Bays 10km and Lee joined in too.

“I couldn’t run the whole thing, it was crazy hard! So I thought I should start over smaller. We looked around for other events to do that were under 10km and parkrun popped up. We lived in Wairarapa at the time and our nearest one was in Lower Hutt. 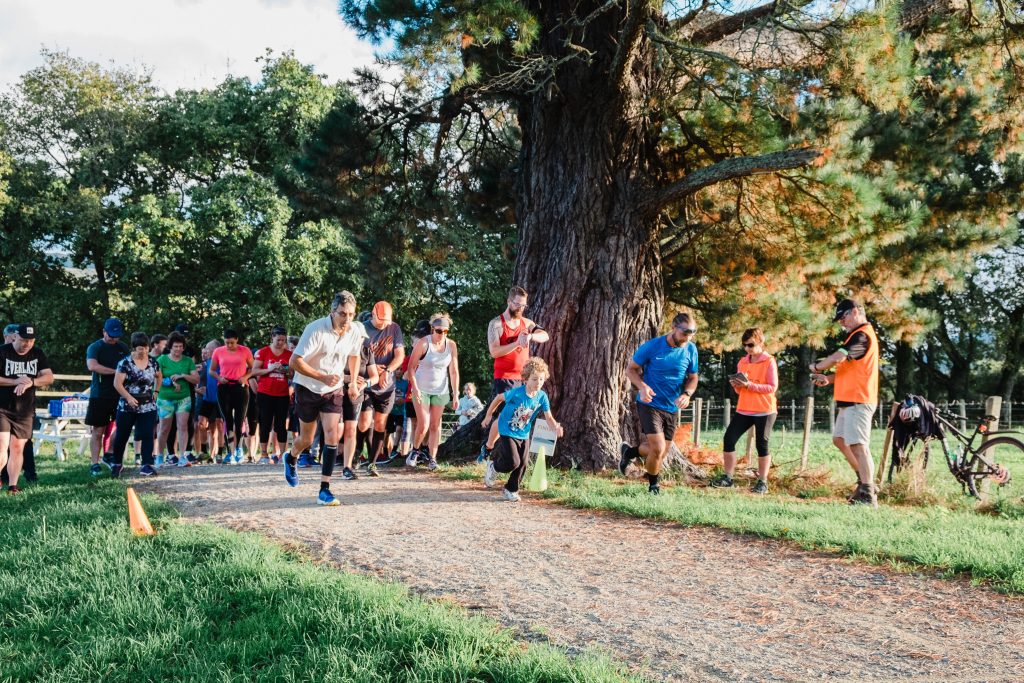 Lee and Nathan at the front of Greytown Woodisde Trail parkrun

“We didn’t want to drive over the Rimutakas just to run Lower Hutt parkrun, but the grandparents lived there and there’s the markets, so we thought we’d stay the night and make a weekend of it.

“We didn’t know anyone else there. We ran it then went home. We weren’t very engaged. But the more running we did the more runners we met. It seemed that parkrun was everyone’s gateway to running.”

Their parkrun story slowly developed, with trips to Lower Hutt once a month in the back end of 2018.

Then in February 2019, just as they were setting off on their adventure, they each ran and walked at the new Greytown Woodside Trail parkrun.

By then the kids had started going to parkrun too.

Nathan now has 25 parkrun finishes, Eli and Hayley 6 each. 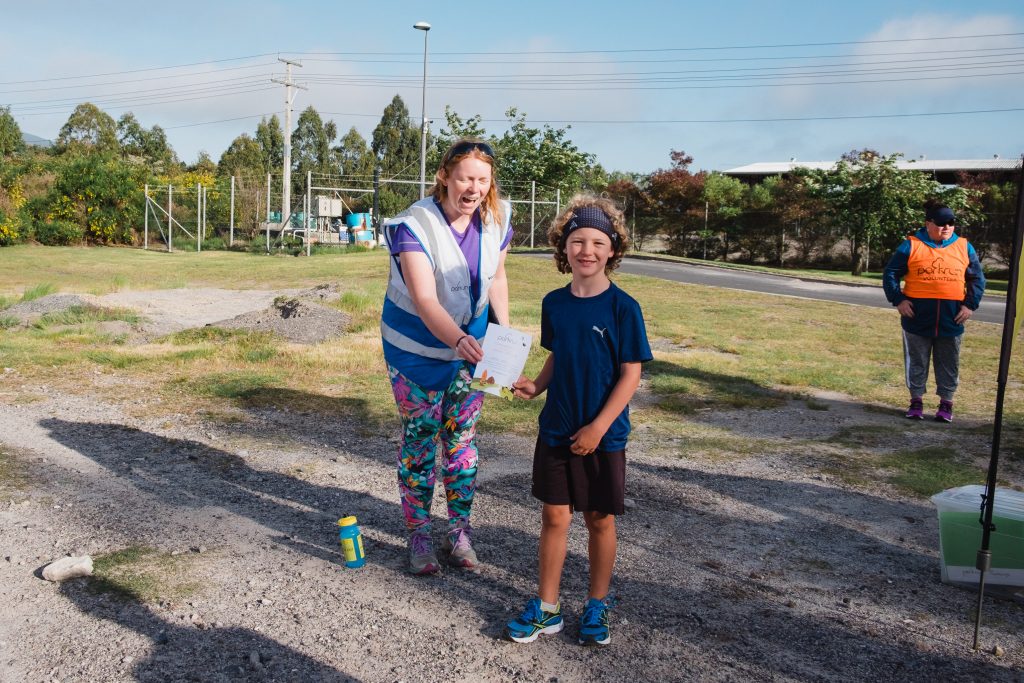 Nathan getting his J10 certificate

“When Nathan started running he wanted to run every one,” says Lee.  “He tends to run with whichever one of us is running. The 5k is a bit long for Eli and Hayley who walk their parkruns, so we’ve had a few where they’ve not finished.

“But even with a DNF, it’s great to see them out exercising and joining in! I love two lap courses the most, because whoever’s got the lead can collect the kids on the second lap if it’s become too much, and then the other can run their own to finish.” 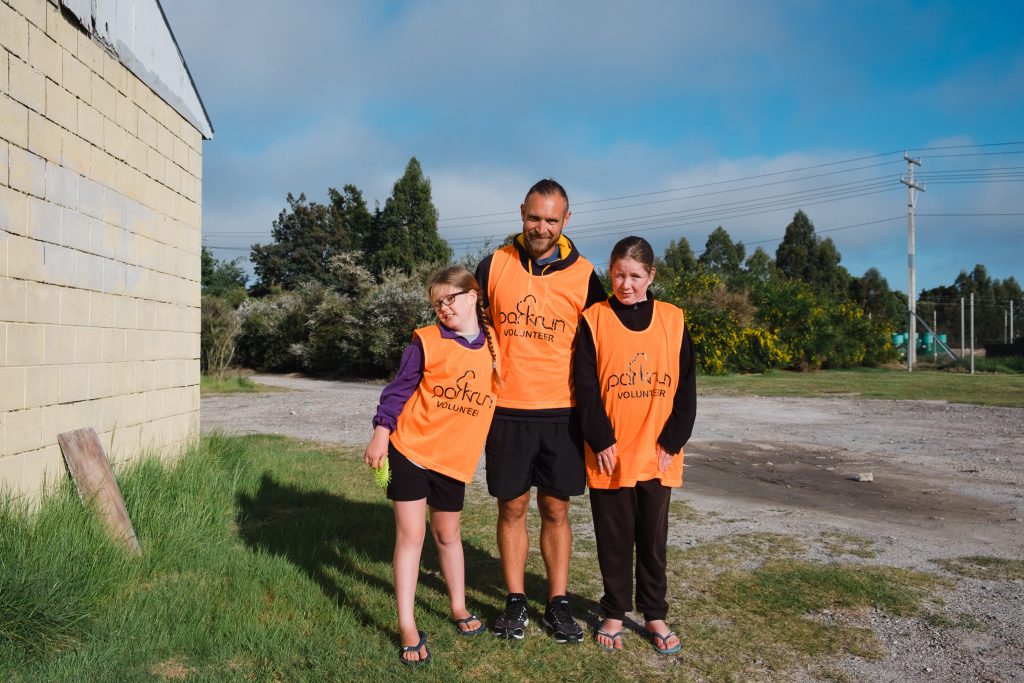 Lee with Hayley and Eli when they marshaled.

One time at Greytown Lee ran as fast as he could, in order to tag team Carly waiting at the finish with the kids – then she had to spint to catch and overtake the Tail-End-Charlie.

“One thing I like about parkrun is that it’s not about the time,” says Lee. “It’s about the commitment to turn up on a Saturday to do it. The t-shirts are for attendance milestones, not time and that’s what I really like about it. It’s encouraging and achievable for everyone.”

Conversation with other human beings is another drawcard, says Carly.

“Van life can be isolating and as much as I love all the time I get to spend with my family, I especially enjoy having the opportunity to meet and chat with other people, parkrun has been really good for that.

“That’s been a cool thing for us, as we didn’t have a consistent tribe while on the road.”

Community
Driving around the North Island going to different running events they’ve found their people. At first it was people wearing Running on the Spectrum Greatest Virtual Run tops, and then it was parkrunners.

“What I’ve noticed is we run Greytown and see people there. Then you go to Anderson Park or Flaxmere and you see someone who was at Greytown. It’s a cycle of people going to different events.”
Carly loves the personal welcome at the smaller events. 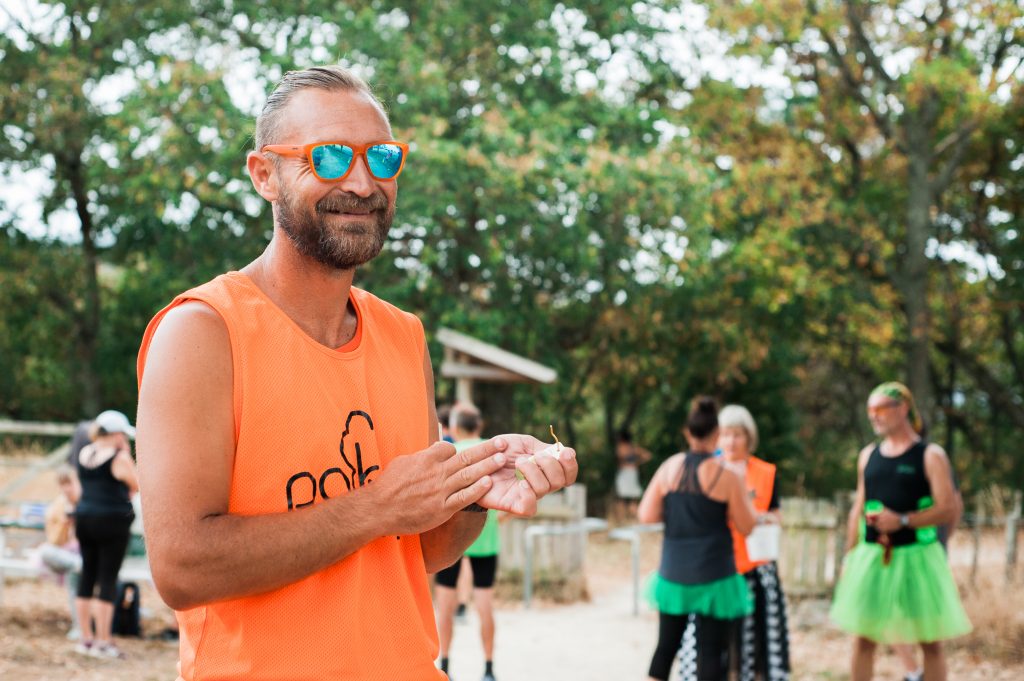 “We stand out as a family of five.”

Pre-Covid achieving their 50 milestones was a goal for 2020.

But with ever decreasing weekends this year that goal has slipped away.

We met in Rotorua ahead of the Rotorua Marathon – one of the few events to go ahead this year. It was Carly’s turn to run.

“parkrun is one of the few things that’s free and easy. We started running thinking we just needed shoes… but then you find yourself buying all the fancy gear and $30 socks! Even little Nath has some pretty cool running kit now”.

Angela Fukutome is Event Director at Sanukikodomonokuni parkrun in Japan. She was never a ‘runner’, describing herself as someone who always had a ‘tummy ache’ on cross country day.   On a visit home she plucked up the courage to go to parkrun, and that day changed everything. Here’s her story.   I was never…