In 2017, then 83-year-old Margaret Smith became the oldest woman in parkrun history to join the 250 Club. Three years on, she encourages other older people to join the parkrun family to tackle loneliness.

I have always been very sporty and active. In my younger days (they’re not that long ago!) I was a keen cyclist and cycled in time trials at all distances, as well as racing on the track. When my husband and I retired, we went on a three-and-a-half month cycling tour of New Zealand, Australia, Hong Kong and Singapore.

After he sadly passed away having battled cancer, my son Peter took me along to parkrun with him when I was visiting him in London… and I absolutely loved it.

When I returned home, I found my nearest parkrun and went along. After completing it four times, my son Peter sent me a text message telling me that parkrun was coming to my hometown. It would be fair to say that I caught the parkrun bug, because I went on to become the oldest female parkrunner in the world to complete 250 parkruns! 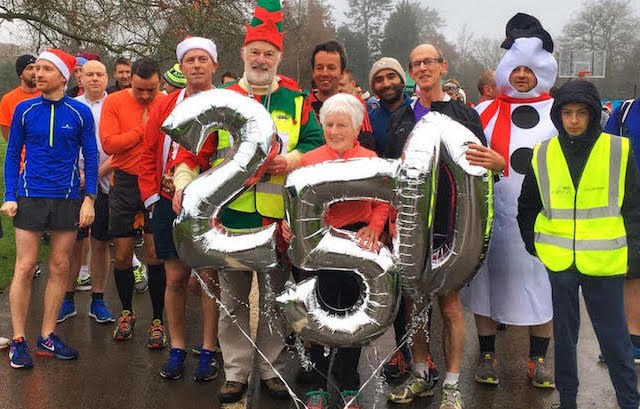 Now I have completed over 300 parkruns, several half marathons, and four marathons, including the London Marathon which I ran in my husband’s memory, raising money for charity.

I think what GPs are doing, prescribing parkrun to patients via the parkrun practice initiative in the UK is fantastic – particularly for older patients. Being active, whether walking or jogging is so important. Every day I walk at least 10km with my husky-labrador cross, and on Sundays this is more like 15km.

But as well as that, encouraging older people to get outside in their local community can help cut the loneliness that older age can bring. I am now 86 years old and the parkrun family are fantastic, so caring and encouraging.

I look forward so very much to Saturdays, whatever the weather, it fills my adrenaline gap!

Angela Fukutome is Event Director at Sanukikodomonokuni parkrun in Japan. She was never a ‘runner’, describing herself as someone who always had a ‘tummy ache’ on cross country day.   On a visit home she plucked up the courage to go to parkrun, and that day changed everything. Here’s her story.   I was never…