Sherwood Reserve: The Newest parkrun On The Block

On Saturday 3rd July, the New Zealand parkrun whānau grew a little larger as we welcomed Sherwood Reserve to the fold.

Sherwood Reserve was the product of a dream to bring parkrun to Auckland’s North Shore.

After many months of searching for the right place, Event Directors Scott Arrol and Andrew Capel finally settled on the perfect spot in Browns Bay and have been overwhelmed with the support from the local community. 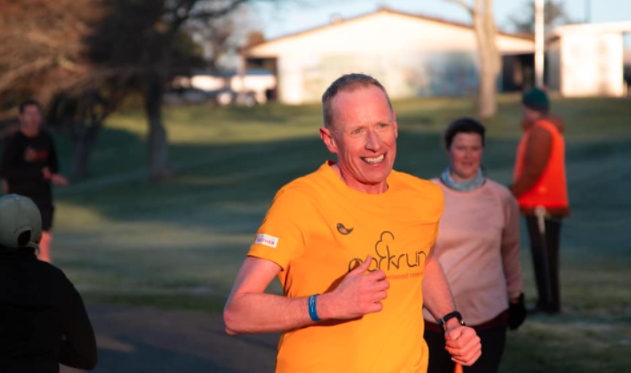 For Andrew, parkrun is nothing new. His sister was a parkrunner in Basingstoke UK, and took him and their Dad along on Boxing Day in 2009.

“It was freezing, and at the time I swore I’d never go back!” laughs Andrew. “On a later trip back to the UK, parkrun had reached my hometown of Bristol where my Dad had just signed up with Ashton Court parkrun, so I went with him”.

Andrew did a few parkruns during trips back to the UK so when parkrun came to New Zealand he knew what it was, but still wasn’t immediately convinced that he should attend. “What seems to be common for lots of people was true for me. I didn’t want to go until I was fit enough. It sounds ridiculous, but I trained to go to parkrun!”

Andrew eventually went to Cornwall parkrun in Auckland in 2013 and has never looked back. He has now completed nearly 380 parkruns at over 90 locations in five countries, run at every NZ event, and volunteered in many of the available roles. 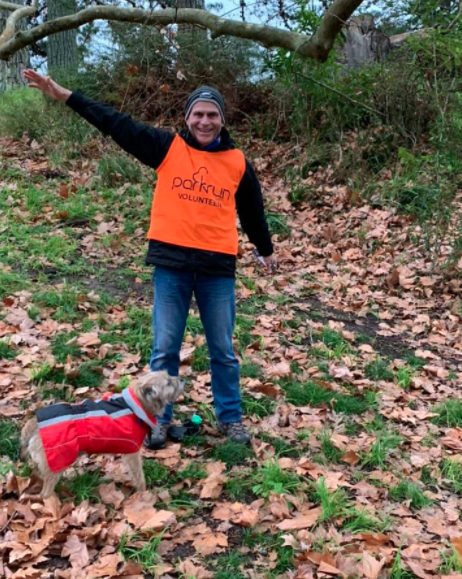 Scott is a more recent parkrun convert. His running friends had attempted to entice him along to parkrun for some time.

“They kept asking me along, but I didn’t really know what it was!” says Scott. He eventually took the plunge and visited Western Springs parkrun in 2017. “I registered online, and printed my barcode, not really knowing what to expect”.

Instantly realising the appeal, he became a regular attendee, before getting the tourist bug and trying out other New Zealand parkruns. In 2019 Scott was part of the core team to set up Hobsonville Point parkrun.

Scott has made his mark on the parkrun community with the evolution of the infamous ‘Scott Airplane’ movement and has enjoyed flying his way around 31 of the NZ events so far, encouraging runners and walkers to enjoy their free weekly timed 5km.

“People shouldn’t take things too seriously” he grins. “Scott Airplanes came about when my wife, Anna, was always trying to find me in a crowd of runners at various running events. I would leap around and make silly faces so she could spot me”

Scott noticed that people around him would often would join in, waving their arms around to gain attention for a photo, and the Scott Airplane idea evolved from that.

“It’s just about having fun” laughs Scott, “you’re guaranteed to get your photo taken if you do an airplane, and it’s impossible to do it without smiling!”

Following the Covid-19 lockdown of 2020 Scott and Andrew, who are both part of a local social running group, started looking seriously for a location for a parkrun on the North Shore.

“We had been looking for a while” explains Scott, but it was really difficult to find a place that ticked all the boxes, and that wouldn’t require five laps!”
A different venue in Albany was the initial idea for a new course, but parkrun guidelines ruled it out. Scott had looked at Sherwood Park a year earlier and deemed it unsuitable, however, a renovation of the park during lockdown last year improved the potential for a course. Following some trial runs with their running group and friends, it looked like the venue would be perfect.

“The Hibiscus and Bays Local Board were incredibly supportive of the launch of parkrun in the area,” explains Scott, “seeing it as a great opportunity to increase park usage in the community” 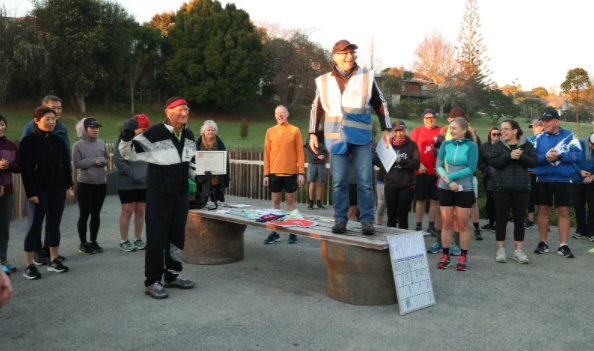 The response from the local community has also been really positive, with lots of excitement and anticipation around the North Shore’s first parkrun event.

“We had over 100 new registrations before the event even launched,” says Andrew “so we knew straight away there would be a good turnout.”

The inaugural event on 3rd July attracted 265 participants, many of whom were first-timers to parkun, and who have attended every event since.

“There was a real buzz and excitement at that first event; we had first-timers who had never experienced parkrun before, chatting with experienced parkrunners with hundreds of runs” explains Andrew. “Lots of tourists came in too, it meant the local community got a real feel for what parkrun is all about”.

Numbers have since settled, and Scott has noticed that among the regular participants, it is many families who are coming along together each week. “It’s great to see fathers and daughters, mothers and sons, families coming together to run and to volunteer. That’s really the magic of parkrun. It doesn’t matter how fast you are, or what you look like. It’s for everyone.”

Sherwood Reserve’s course runs through Sherwood and Freyberg Parks on a mixture of permanent paths and trail paths, and is a three-lap course, involving a repeated loop and out and back section.

“People think three laps might get boring” says Andrew” but the nature of the course with the out and back section as well as the loop means that you see people over and again, it’s lots of fun”. 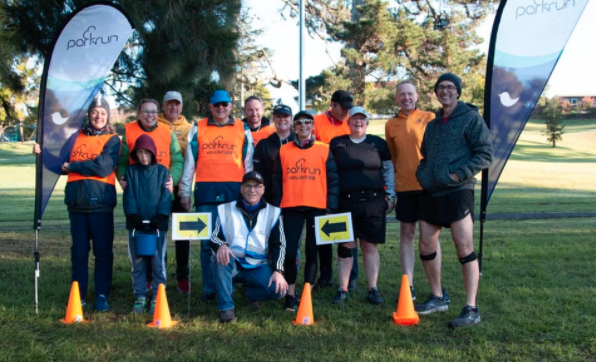 Andrew and Scott credit the success of the launch of Sherwood Reserve parkrun to the enthusiastic core team that was largely born out of their social running group, many of whom turned up to trial the course and offered their feedback.

“We have seven Run Directors already, and everyone is always willing to get involved and help out with the volunteer roles”, says Andrew.

Scott agrees “We couldn’t have done this by ourselves, and we’re so grateful for the huge team around us who have helped to make this happen.”

If you’re thinking about starting a parkrun in your area contact us, we’d love to hear from you.