I started running less than two years ago as a way of dealing with SAD and winter depression. Those of you who live in the Nordic Countries can probably relate to that! I found parkrun as part of this process and ran my first ever parkrun in April 2018. It’s been life changing in many ways.

Once I’d slogged my way through the “Couch to 5k” programme (Nov 2017-Mar 2018), and learned to run off of a treadmill and in outdoor conditions, parkrun was the obvious next step. It came highly recommended by two friends in England, but there was a problem, a huge problem: I live in Turku (in Swedish Åbo) in the southwest of Finland. It’s the old capital of Finland, with twice daily ferries to Stockholm. It’s a pretty and lively university town with a river running through the middle and an ideal place for a parkrun, but we don’t have one. At least not yet! 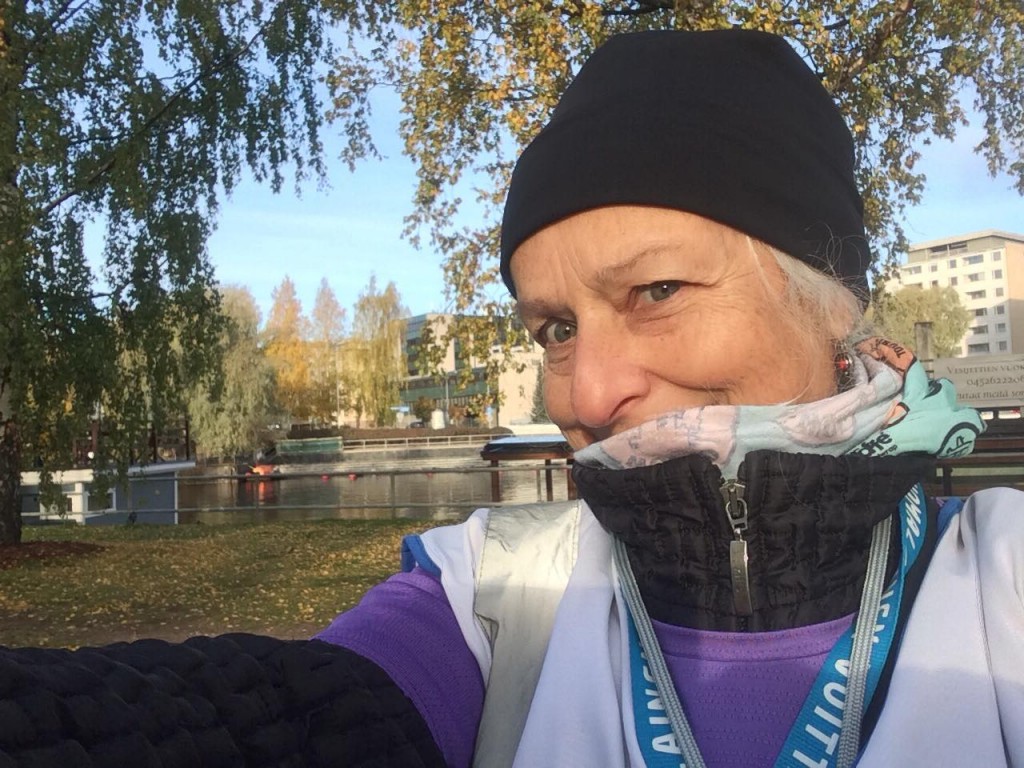 My friends had found that parkrun had started up in Finland, (a huge shout out to Ulla and Johanna!) but (at that time) had only one parkrun. It was held every Saturday at 9.30am in another beautiful university town (one with a history in textile manufacturing so akin to the Manchester of Finland), ie. Tampere. Problem #2 was that Tampere is 163.5km away: 2 h (one way) by coach or train!

Research showed that I could get to Tampere parkrun in time if I caught the 06:20 coach from Turku Bus Station (3.5 km walk from home). So on a cold, dark and very wet April morning I did just that.

For the first time ever I ran 5km without stopping and I was grinning ear to ear as I staggered over the finish line of the Tampere parkrun with a very respectable time of 42:07. I should now not only remind you that I was a complete novice runner at this point – but also add that I am almost 60 years old and two years ago had been very overweight too! As I said running has been life-changing for me. 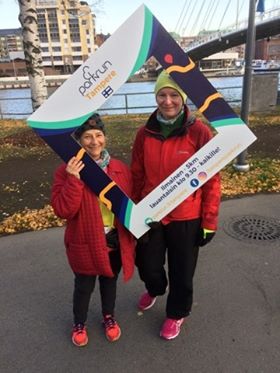 I made the decision to commit to attending the parkrun in Tampere at least once a month (if I could) and did so until autumn 2018. During that time on a visit to the UK in July 2018 I even managed to get my first overseas parkrun (in Beeston, Nottingham) and I am still kicking myself that I missed the opportunity to run in the UK’s most northerly parkrun. I was in Shetland in May 2018 and at that time I had no idea that there was a parkrun had started in Lerwick on the island of Bressay and only found out when I flew out!

In September 2018 I took a pause from parkrun for two months in order to walk the camino Frances (a pilgrimage of almost 1000 km across northern Spain) and when I returned – all ready to pick up parkrun again – disaster struck. Problem #3 The bus schedule from Turku to Tampere had changed and instead of leaving the first coach leaving at 6:20 am on Saturdays, the bus company had moved it to the more reasonable (for anyone else!) time of 7:30 which meant that the coach now arrives five minutes after the parkrun start time.

Luckily parkrunners in Tampere heard of my frustration and felt my pain and several of them offered me the possibility to stay over with them on a Friday night instead! I’m so thankful they did – not only have I been able to continue running parkruns in Tampere – but equally important is that I’ve made really valuable friendships with the parkrunners there too. (My family joke that I’m no longer ever at home on a Friday for ‘Pizza Perjantai’- oops!)

My options for parkrun in Finland are still quite limited.

I was very excited that the Tokoinranta parkrun in Helsinki started up while I was away on the Camino and I’ve now run the parkrun there 9 times. (I can catch the 06:37 coach that gets me to Helsinki in time) and because of the kindness of two parkrunners in Tampere I’ve also been able to run the Vääksyn kanava parkrun as well. (That’s not easily accessible by public transport).

The journey is a long one (both ways!) and sometimes I do use the journey to catch up on reading or to take a nap, but I’ve also learned to use the return journey to write the parkrun run report.

I’m really very hopeful that a parkrun could be set up in Turku someday, though the process hasn’t been started yet. If you are interested in getting parkrun up and running here in Turku – or if you know of someone who might be – please do get in touch. I’m thinking that it would be rather fun to be unofficially “twinned” with Stockholm – the ferry schedules make it possible for runners to leave Turku/Stockholm on a Friday and arrive on the otherside in good time for the parkrun on the Saturday morning. 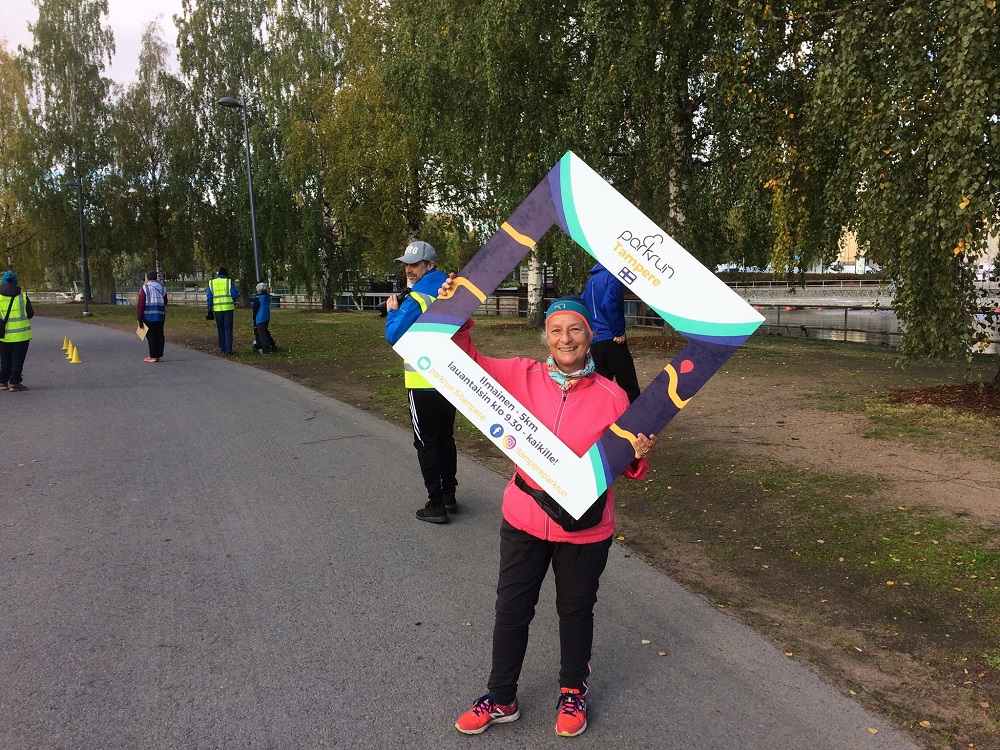 I’m doing my part to make this happen. I talk (and post) about parkrun all the time. I’ve checked out possible routes that meet the parkrun criteria (often with parkrun friends who’ve been visiting). I’ve dragged friends (from Turku and the capital area) to the Tokoinranta parkrun to check out parkrun for themselves, and this autumn I even joined a local running school in part to improve my running (I’m still not very fast and definitely not the most elegant of runners!) but mostly so I could meet like-minded people to spread the word about parkrun with a view to setting it up here in Turku.

As we all know, parkrun is free, for everyone and forever. More than that for me, however, it’s also about friends. Thank you parkrun for planting me in a new circle of people (in Tampere, Helsinki and beyond!) and for helping to make a huge difference in my life.

People were clearly sticking to their new year’s resolutions as we celebrated the highest ever turnout for parkrun in January in the Nordics. Volunteers setting up courses around the region were treated to an amazing sunrise, a reward for rising early perhaps! Here’s our photo round-up from across our region:   Reaching down low to…

Nothing’s going to stop our parkrun!

Kungsängen parkrun is a cosy friendly event, usually attended by 15-20 regular local parkrunners, and organised by a small dedicated team of volunteers.   It is a beautiful parkrun that first runs alongside the edge of the forest for just over 1km, before a sharp right turn plunges runners deep into the woods. Here the…