The things we have learned (the hard way) at Tampere parkrun

Two years and more than a hundred parkruns behind us we can already call ourselves, if not veterans, then at least seasoned parkrun organizers. An event that started out with only a few people has grown into a weekly gathering of very different people all sharing a passion for parkrun.

During this time our team have had their fair share of ups and downs. The number of average weekly runners has increased steadily, which gives us some reassurance that there are more ups than downs.

This blog post is trying to give a peek “behind the scenes” of Tampere parkrun and into the most memorable happenings at our small but lively parkrun event.

Tampere parkrun not only attracts local active people but also some not so common visitors. So far on two occasions we have had visitors from the Moomin Valley, as Moomin has come to say hello to us. Vili Västäräkki from Tampere City has also wanted to come and enjoy the atmosphere. 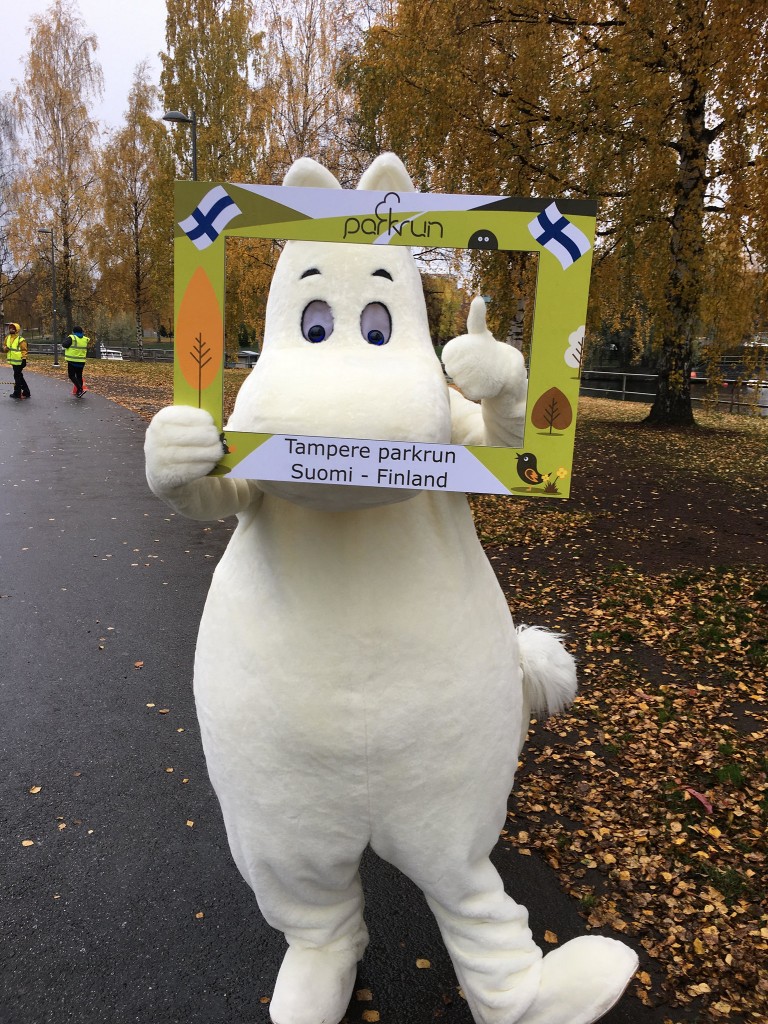 Perhaps the most noteworthy visitor came escorted by police car. One Saturday a young moose run part of the way with our participants but, perhaps deciding that they were going too fast or slow, went on its way closely followed by the police escort! 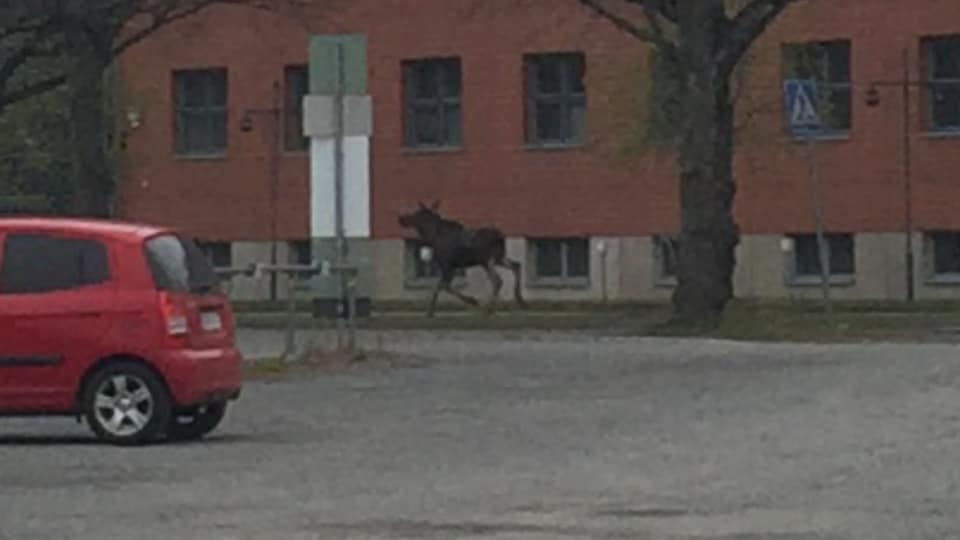 Our lowest number of participants can be explained by several factors. According to one of our visitors from abroad it was held in “stunning” -20c conditions with sunny skies and a mild wind. That same morning Finnish skier Iivo Niskanen won the gold medal at the Olympics.

The highest number of participants was achieved when we were celebrating two birthdays at the same time. Event manager Johanna and core team member Ulla both invited friends and relatives to come and enjoy parkrun birthday cake at the event.

Having Tampere City upkeep most of the route has allowed us to organize the event even in winter conditions. In some cases though changing weather has surprised us. On one occasion the route was in a very good condition on Friday evening. Overnight however, it took a turn for the worse and some parts of the route became slippery.

Having good backup routes has been a big benefit. Unfortunately, when we needed to shorten our route to half of normal one time we realized only afterwards that route was just short of 5k. One older participant is still remembering the PB from that event as a good motivation to keep coming back and better that result (and this did happen some time later on).

Fortunately Tampere parkrun has always been able to process results from the event. More times than we care to remember, however, there have been issues with the equipment, some manual errors in timing or token reading, surprise events in the startup area or volunteers not showing up.

When using the stopwatches we always use two time keepers even though our event is quite small. If you have times (that are even close enough) you can use the backup watch to process and publish results. Without these times it would be virtually impossible to recreate results. 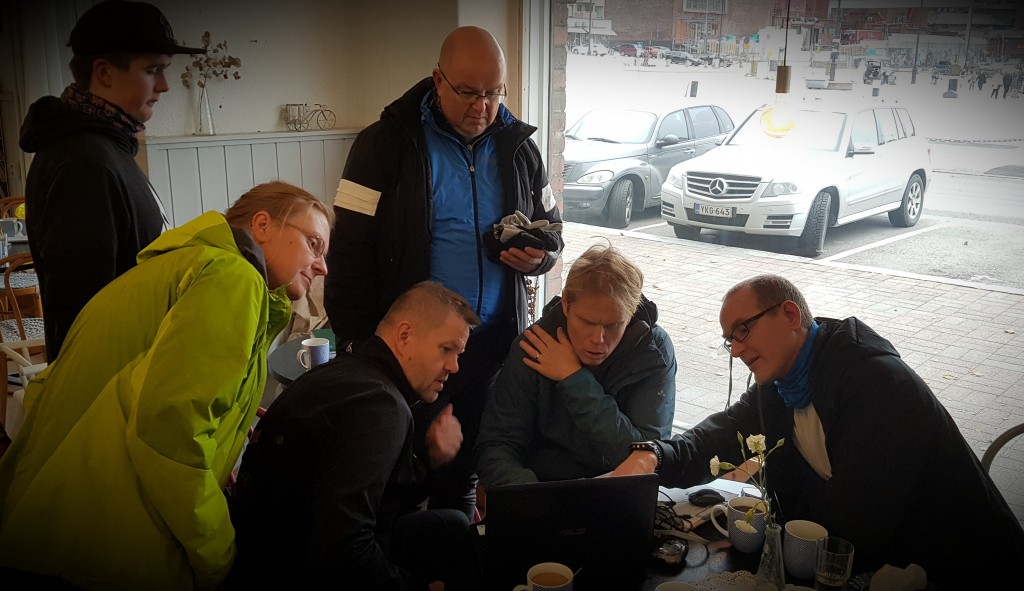 On one occasion we had two time keepers standing opposite each other only two meters apart at the finish line. People started to arrive and the timers beeped happily. Then a routine mid-run checkup by the timekeepers stating their numbers revealed that the other clock hadn’t registered all of the times and volunteer hadn’t noticed it as the other clock had beeped. “My clock shows 13 what’s your number? What, mine shows 11…”. Somehow it has also been hard to memorize that you start with your thumb and then take time with your index finger. We are probably not the only ones that have continued to pause/restart timers with our thumbs only to realize that the times on the stopwatches do not match.

Tokens have also been a source of distress. Not only once or twice but three times in a row we managed to spread tokens all over the start area. The silver lining on those occasions was that there was not much wind to spread the tokens into every direction or for the snow to cover them until the spring.

Hassle with tokens and barcodes does not end there as the barcode reader has also acted up. Due to light conditions, weak batteries, who knows what else, the token reader has beeped but when reading the results on the computer some of the items were not found. As ever, it’s then back to drawing board trying to figure out everyone’s result!

Perhaps this is also an appropriate channel to offer apologies to participants whose achievements were not properly noted at the welcoming speech. There seem to be so many things to state at the heat of the start that sometimes some things are now and again simply forgotten. It is also quite embarrassing is when you are preparing to give credit to regulars for their achievements your mind goes blank just when you are about to state their name! 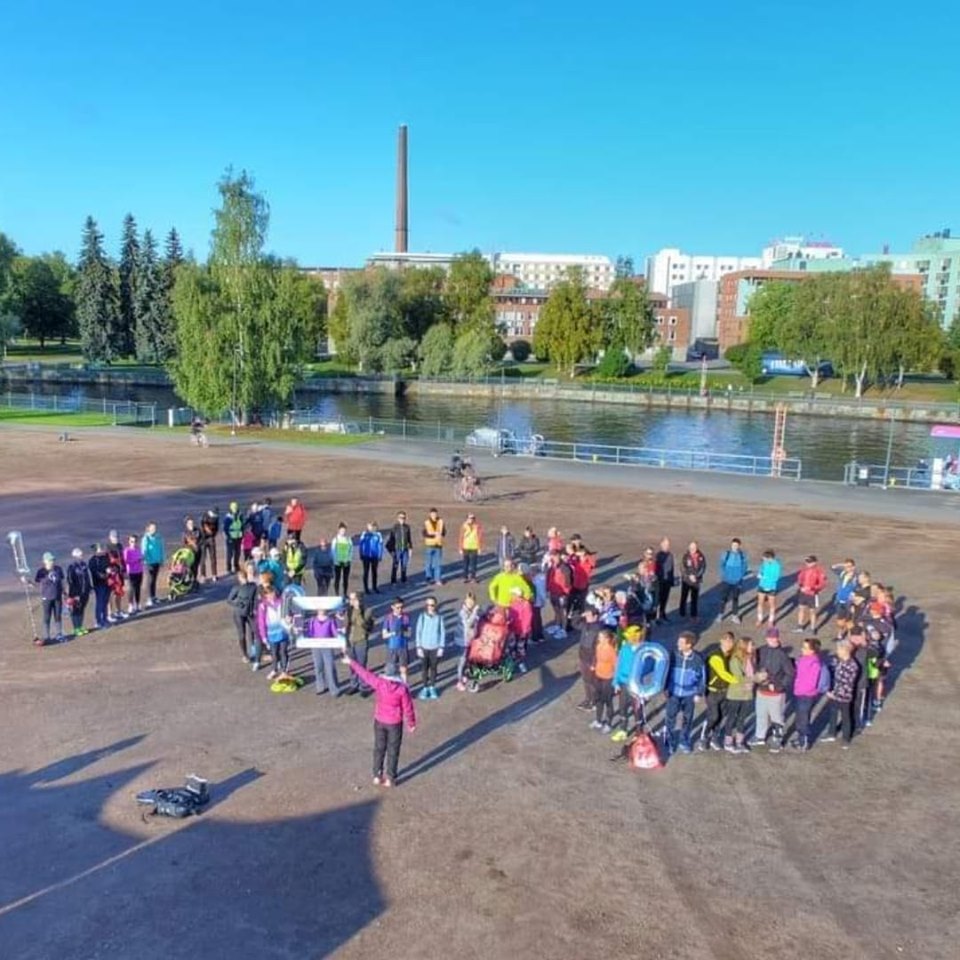 We have also found out that American Footballers are a great bunch of people. We came earlier than usual to prepare for our #100 parkrun when we noticed that there were cars and people right next to our start area. The final of the Finnish American Football league was taking place later that Saturday and they had reserved the park area for the event. Fortunately after brief discussions and swift maneuvers we were able to take our #100 pictures with the drone and to move our start to the B-start location.

On another occasion Tampere was hosting the U20 European Championships (Summer 2018) and the practice area was right next to our start. Luckily the bicycle of one of our participants was not badly damaged after the metal ball from shot put ring rolled with good force into the back tyre. At that point it became obvious we needed to move our bikes from that location to safety!

For more than two years now we have been organizing Tampere parkrun almost every Saturday. Our core team has grown nicely and more new faces will be seen in the future as Run Directors. Volunteering at the parkrun doesn’t mean that one needs to be RD one day but it has become clear to us that having a larger core team benefits the whole event. New RD’s first familiarize themselves with the tasks with someone and when they feel comfortable they can take on the role as RD. This way we will be able to divide volunteering between a larger group of people.

This seems an appropriate place to stop this post and thank anyone who actually read this far. Even bigger thanks goes to everyone participating in parkruns as volunteers, walkers or runners. Looking forward to seeing YOU at parkrun next Saturday!