When Jude Thomas took off at Kedron parkrun last Saturday, he had the Australian parkrun record in his sights. When he crossed the line though, he wasn’t sure if he got it.

Running too quick to glance down at his watch, Jude crossed the line in fourteen minutes and two seconds – a staggering pace of 2.48min/km – eclipsing Olympian Liam Adam’s record of 14.13.

Jude’s previous best was 14.35, set on the quick Sandgate course two years ago. “I was laying on the ground and someone called out – that’s the Kedron record – then someone else yelled out – no, that’s the Australian record – so I was pretty happy,” the 19-year-old said. 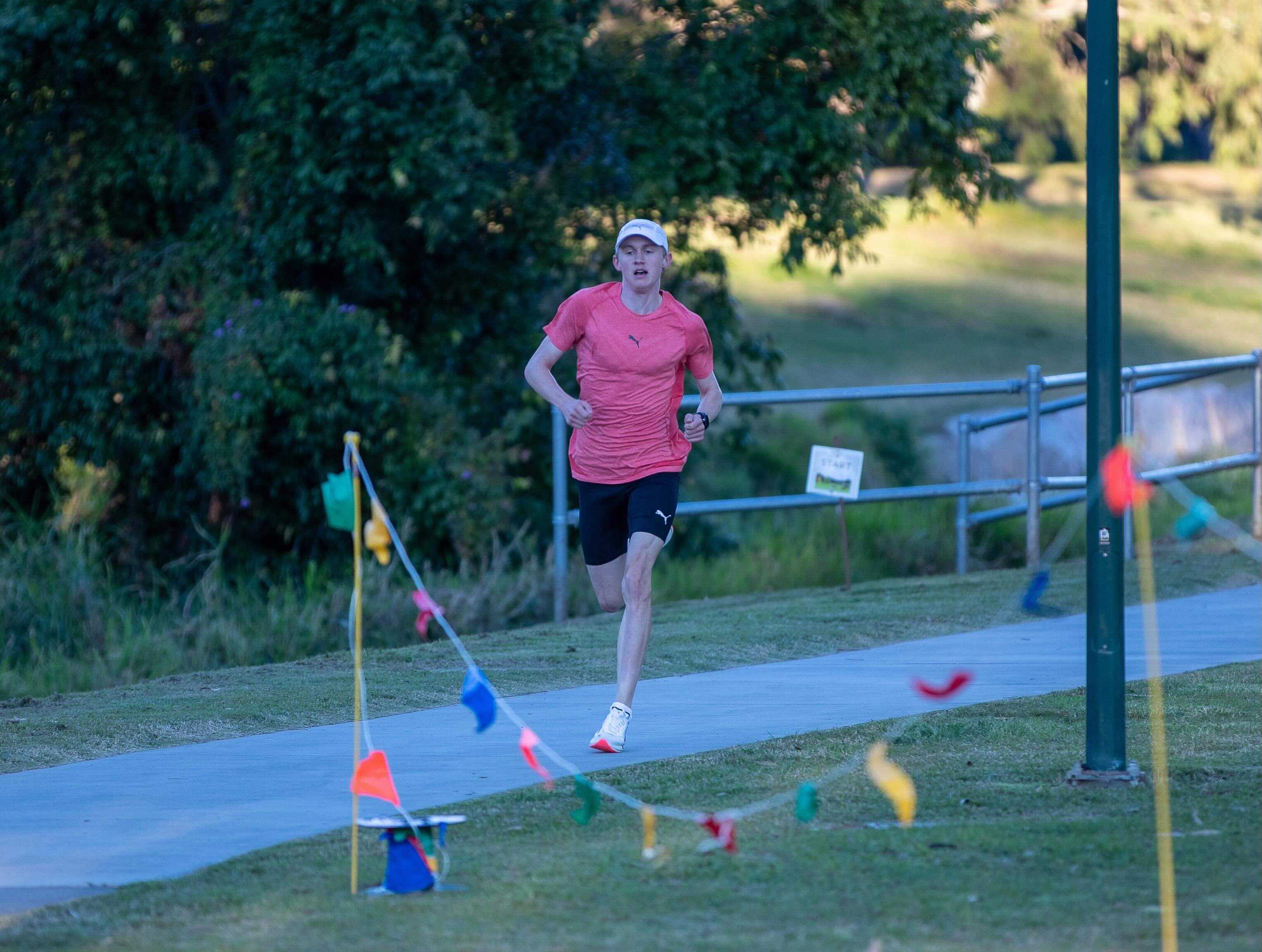 The Ipswich parkrunner with 103 parkruns to his name said the initial plan with his coach was to have a crack at the 14.20 Queensland record, also set on the fast and flat Kedron course, then see how much faster he could go.

Jude found his love of running through parkrun in 2014 at age 12. He started out completing the 5km in about 25-26 minutes, using it as a way to keep fit for soccer. “I didn’t really like running. Dad would drag me out of bed to go to parkrun, then a few years later, I was dragging him out of bed to go,” Jude said.

He’s been on the competitive Australian running scene for about three years and holds the under 20 national titles in the 1500m and 3000m and broke the meet record for the 5000m. When winning the 3000m, he broke his idol Ryan Gregson’s Australian record.

Jude, who runs with the Ipswich and District Athletic Club as well as the NANCI Running Crew had beaten Liam Adams over 5000m before, so felt confident he could snatch the Olympian’s record.

Jude’s track personal best is 13.50 and while he knew the parkrun global record stood at 13.48, it was never the plan for Saturday, despite the near-perfect conditions.

But the talented athlete said a sub 14 time and a parkrun global record was possible and that he would have another crack later this year or next year.

While a spot on the Tokyo Olympics team was out of reach, Jude’s sights are now set on the 2022 Birmingham Commonwealth Games and the 2024 Paris Olympics. He made a junior Australian team to travel to Kenya this year but Athletics Australia are not sending a team due to the pandemic.

Jude said despite not having raced in a few months, parkrun provided him with a “safe space” to do his best on Saturday. “At parkrun, if it doesn’t go well, it’s not a huge deal. I’m racing the Gold Coast 10km in a few weeks and I really wanted to see where I was at,” he said.

Jude’s aim for the Gold Coast is to go under 29 minutes and he will have Liam Adams there to race, before Liam heads to Tokyo for the marathon.

Jude said he was incredibly grateful for the start parkun had given him. “It really shows, parkrun can develop you into whatever you want to be. I had no desire to run at all before parkrun and now I have five national titles and a few national records. It’s changed who I am and it can change people for the better,” he said.

The social aspect of parkrun is what made it stand out from other events, Jude said.

“At parkrun it’s like no one is there for the run – they are just there for the good time and to have a chat. That’s the difference with parkrun and going to a 5km race. It’s so much more positive and encouraging. The social aspect of parkrun has changed running for me.”

For Esther Stanier, volunteering at parkrun gave her back a sense of purpose, routine and a way to feel “useful”. Here she explains why, and recommends everyone gives it a go!   I am so proud to be part of the parkrun community, both as a parkrunner and a volunteer.   My first parkrun was in…