After being diagnosed with Chronic Fatigue Syndrome, Karen Worsell was looking for ways to maintain her fitness. Inspired by her son and grandchildren, she set her sights on her first parkrun. Now she wants everyone else to know they can achieve their dreams too.

From my earliest days I have always wanted to run. My parents had both been athletes in their younger days, my father a keen cross-country runner, and my mother an aspiring sprinter who narrowly missed out on selection for the British Olympic team in 1948. I inherited my parents’ enthusiasm for athletics and sport in general if not their ability and as a child always tried so hard to be selected for the school teams, usually without success.

During my years at university I attempted on a few occasions to go out jogging with a few friends, but somehow never really managed to sustain this on a regular basis. There was always a part of me that felt a secret longing to be able to run. Like Eric Liddell, immortalised in the film ‘Chariots of Fire’, I felt that somehow if only I could run, then I too would ‘feel His pleasure’ (“God made me for a purpose, but He also made me fast! And when I run, I feel His pleasure.” – Eric Liddell, Olympic 400m gold medallist in Paris 1924, and later missionary in China.)

After finishing my studies and commencing work as a doctor, marrying and having two children, trying to retain some degree of fitness was once more a goal. There were several brief attempts to start running again, but these were almost invariably short-lived. Frustrated by my lack of progress, I would quickly become discouraged and give up.

And then, in my early forties I gradually began to develop various symptoms, of which the major one was overwhelming fatigue. On many afternoons I would return home from work as a part-time General Practitioner feeling exhausted, and then spend a couple of hours in bed before the children returned home from school. After about 18 months of being in this condition I gave in my notice at work, feeling unable to continue performing my medical duties to an acceptable standard. I was later referred to a specialist in Liverpool and diagnosed as suffering from Chronic Fatigue Syndrome (CFS/ME).

Twenty years later and after various courses of treatment, this illness has remained with me and I am still learning to pace myself and live with it. At its worst, I ached all over and struggled to walk, climb stairs or hills, and just felt like staying in bed much of the day. If walking was difficult, running seemed to be out of the question. However, I have made a degree of progress over the past few years, partly due to starting to take a daily afternoon walk. This was initially for less than five minutes each day, and was gradually increased over a period of several months until I was walking for 20-30 minutes at a reasonable pace most afternoons.

Assuming that this level of activity was the best that I could hope for, having reached the age of 62 and with a long history of CFS, my aim was simply to try and maintain this degree of fitness for as long as possible.

Then, a little over 18 months ago, in January 2020, I received a message on my phone from my son, who informed me that he and his 10-year-old daughter had just completed their first parkrun at the Watergrove event in Rochdale. I had heard  of parkrun prior to this, but knew only that it was a 5k distance that anyone could enter. I said nothing to my son about it at the time, but in my mind there rose a faint glimmer of hope that perhaps there might be a slight chance that I could join my son and granddaughter at a parkrun one day. 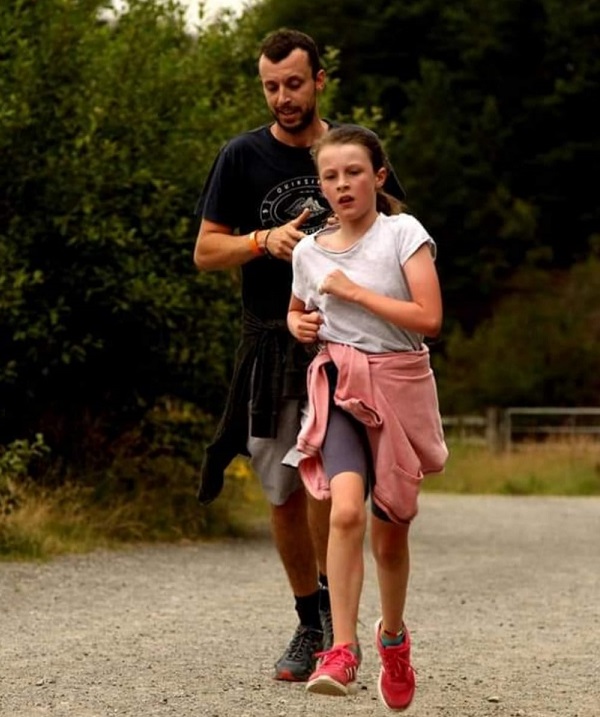 I searched online and found out about the couch to 5k course, and agreed with my husband to start this with him at the end of January last year. Unfortunately, I sprained a knee ligament about 10 days into the programme and spent the next four weeks having physio and unable to train! Once recovered I tried again, by which time my husband was half way through the couch to 5k course and disappearing into the distance as I struggled to run for a minute, walk a minute! I managed to reach about week four, but was finding the weekly increases too much for me, even with repeating some weeks. I then found a programme called ‘None2Run’, which was set up by a Canadian running coach called Mark Kennedy. This course lasted 12 weeks, progressing from zero to running for 30 minutes and included strength and mobility workouts to perform on the days in between runs, to reduce the risk of injury. Mark was available to contact by email, and was a great help to me, along with the online ‘None2Run’ community of similar beginner runners. With their support and my husband’s continued encouragement, I was eventually able to run non-stop for 20 minutes on my 63rd birthday last June, and shortly after this completed the programme!

The next goal was to continue running three times per week, gradually increasing my distance to 5k, and then do a parkrun! I knew you didn’t have to run all of parkrun, or even complete the whole 5k, and that I could also go along and volunteer, but my personal challenge was to be able to run the 5k distance.

The only problem in achieving this was the fact that COVID-19 had arrived within a few weeks of taking up running, and in March last year all the parkruns were suspended. Looking at things positively, this gave me time to gradually gain strength and stamina over the ensuing months. I also asked my grandchildren if any of them wanted to ‘go running with Grandma’, which led to my two eldest granddaughters (aged 10 and 12 years) often accompanying me on my runs along the Rochdale Canal.

Eventually the day came when the date was announced for the return of parkrun and on Saturday 24 July 2021 my dream was fulfilled when, along with my son and two granddaughters, I walked up the slope to the start of the Watergrove parkrun. I had heard how hilly and challenging this 5k course was, so I had mentally prepared for it and decided that I would walk up some of the hills rather than overdo things, and hoped that I could complete the run in 40 minutes or less. 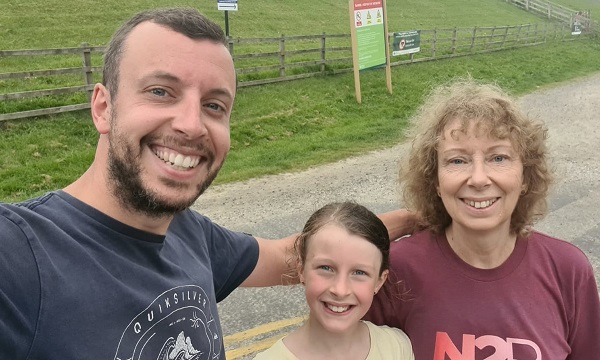 The weather was good for running, cool but dry, with just a slight breeze. I ran alongside my 10 year old granddaughter, a few yards behind my son and older granddaughter, and we settled in towards the back of the field. I did need to walk much of the uphill sections (they were tough!), but enjoyed the downhill parts, and the views across the tops of the moors. As the course levelled off for the final stretch along the bank of the reservoir I managed to keep going, and felt a real sense of achievement on finishing. 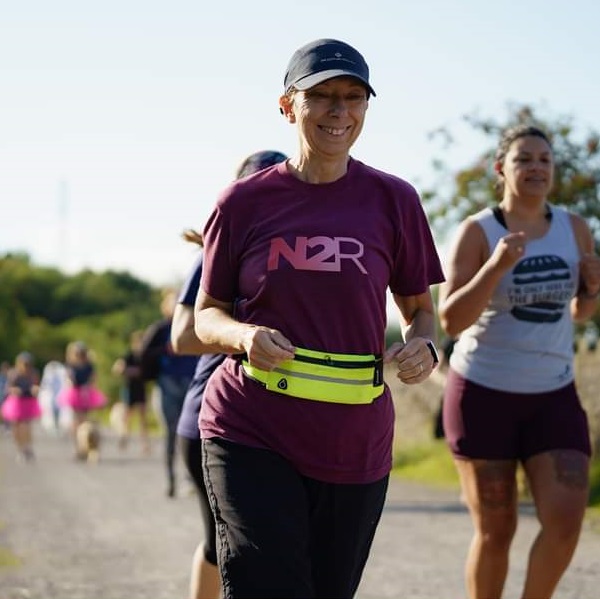 Since then, I have bought some trail running shoes, and with these to assist me on the uneven terrain I returned for my second parkrun last Saturday morning. It felt great to be an ‘experienced’ parkrunner rather than a first-timer, although I still had butterflies in my stomach as I walked up to the start. My family were unable to be with me on this occasion, but I chatted to a few of the other parkrunners as we waited to start, and it was nice to hear them encouraging me to keep going as our paths crossed at various points on the course. I even knocked almost two minutes off my first time. 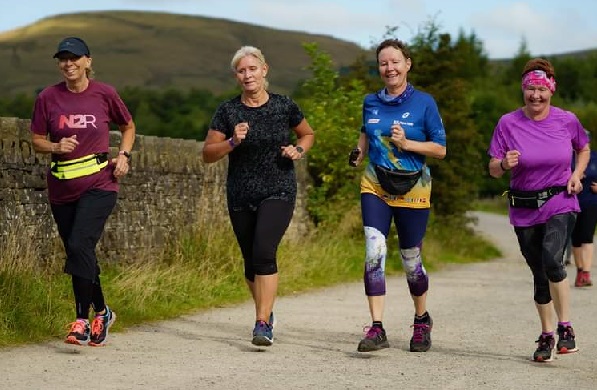 I certainly intend to continue parkrunning at Watergrove for as long as I am physically able to do so, and am so thankful for that initial message from my son which inspired me to start in the first place. I would recommend parkrun to everyone as a great way to keep fit and active, make friends and achieve your dreams.

Welcome to the Nordic photo roundup from 6 August

A warm welcome to another week of summer Nordic parkruns. We enjoyed blue skies and great conditions for much of the region although some our Finnish friends were not quite so lucky. Welcome to over 100 people parkrunning for the first time on Saturday! Here’s the best of the action:     Crossing the finish…