A celebration of life

When Clare Finch’s eight-year-old son Adam was diagnosed with an aggressive form of cancer it was like a bomb going off in the middle of her family. During the following nine months in hospital, there was one thing Adam held onto – that one day he would get back to junior parkrun…

Everyone has their own motivation for going to parkrun. For some people it’s breaking their PB, for others it’s keeping fit, and for many it is simply a chance to see their friends. For our family, it’s a celebration of life.

My son Adam was a typical bright, energetic little boy. He was never still, always playing outside. He ran for the school cross country team and loved running and playing football in the garden with his grandad. He was delighted when Wilmslow junior parkrun started and went a few times. But then his illness, which we now know was cancer, started to impact on his running.

Initially Adam began getting headaches, which is unusual for an eight-year-old. These gradually progressed and he felt very sick when he had them. We began to notice a pattern – he had them in the morning or after a period of activity such as lunchtime at school. Initially the doctors thought they were migraines as we do have a strong family history of this. However, it got to the point that Adam couldn’t even function without painkillers and during the summer term and holiday he was frequently ill and unable to join in activities. He became very disinterested in the things that he had loved previously.

When Adam returned to school for the autumn term he was very ill and only managed a fortnight in. He had increasingly bad headaches, sickness, hot flushes and increasing unsteadiness. In October I found him unconscious in bed and we called an ambulance. I was told he had tonsillitis as his tonsils were enlarged and that it was a febrile fit. Three weeks later, our GP sent us back into hospital as all the above were continuous and in the morning he was so unsteady he couldn’t walk.

Adam had an MRI and we were told he had High Risk Medulloblastoma, which is a type of brain and spinal cancer. His tonsils had been pushed forward due to the tumour in his brain pressing into his throat.

A diagnosis of cancer is like a bomb going off in the middle of your beautiful little family. As a mum I felt torn apart; there was no way I could leave Adam to the horrors of the treatment alone, but at the same time I couldn’t support his older sister Megan in the way I wanted to.

Following eight hours of surgery on his brain to remove the tumour, Adam endured radiotherapy, a stem cell transplant, further brain surgery and high dose chemotherapy. The chemotherapy caused severe hearing loss and he will have to wear hearing aids for the rest of his life. Adam was so vulnerable that he had to be put on an isolation ward – even a slight cold could lead to pneumonia and put his life at risk – and as a result he spent his ninth birthday in hospital.

Going through the treatment was like treading water. The cancer is so aggressive and the treatment so terrible that we were virtually in hospital for a full nine months. Megan had to live with my mum and dad, who were amazing, but it’s still not home. I had to close my business to be Adam’s full time carer and this also puts a tremendous pressure on us in other ways.

When we were in hospital Adam was very weak and at times could not even move himself on the bed – we had to turn him and care for all his personal needs. At this point I don’t think he believed he would ever walk again, but through it all he kept saying ‘when I get better I will go and do junior parkrun.’ Many of my family run in the 5k parkrun and this was the one thing that Adam held onto – that one day he would be able to go back to junior parkrun. junior parkrun was always something to aim for in the dark times.

At the end of July we were finally able to bring Adam home, and his determination to go to junior parkrun was stronger than ever. He was pushed in his wheelchair with his Uncle Martyn, who is a volunteer, and then walked (holding on to us) the final five metres. 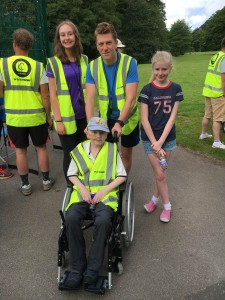 Adam with his cousin Emily and his uncle Martyn, both volunteers at junior parkrun, and his big sister Megan

Last weekend he again felt well enough to go to junior parkrun. This time he managed to walk independently, using his frame, for about the final 25 metres. He has been in school occasionally too for the odd hour, and it is wonderful to see him with his friends again!

The tumour was in Adam’s cerebellum, which is the balance part of the brain. This means his mobility has been severely affected – both his gross and fine motor skills – and he is learning to write again and do things such as using cutlery. Adam is now in a wheelchair, he can walk for small distances using a frame, and is trying hard to build his stamina to allow him to walk further. This is why junior parkrun is so good for him – he can set his own little goals and celebrate his achievements.

When we were on the isolation ward it felt like we were trapped, and as a family we missed little things like going to the park together. Going to junior parkrun as a family is such a small yet such a huge thing for all us. It gives Megan and Adam the opportunity to join in the same activity and share their achievements together. Life in general can be tough when you’re 13, especially when your little brother is so ill, but junior parkrun gives Megan the opportunity to proudly show off her brave little brother.

Adam is still an acutely ill child and despite being in remission we know that this type of cancer is extremely aggressive. He is very vulnerable to infections and bugs and has chronic fatigue from all the treatment, so ‘normal’ may be quite a way away, but hopefully he will get there! Even though this will not be plain sailing, our attitude as a family is very positive.

There are days when you think ‘I can’t wake up and face this day’, as you know it’s going to be so hard. There are other days when I have felt so angry about what has happened – it’s not fair! Cancer’s not fair! Especially not in a child! But I try to stay positive and feel thankful that we live in a country where treatment is available to us, where disabilities are accepted as a whole.

Above all else I feel so grateful that I have been able to bring my little boy home and that we can go out in the fresh air and as a family join in with others and celebrate all our beautiful children. junior parkrun gives us the chance to get out, put our technology away, put aside the pressures of money or some politics at work and spend time together. Family life is so precious and we must celebrate it.

junior parkrun is a wonderful opportunity for celebrating Adam’s achievements. He’ll never be the first person to cross the line, but that doesn’t matter. For our family, just seeing Adam finish is a celebration of achievement.

Everyone has their own motivation for going to parkrun, and that’s ours.

A lifestyle change for the better

Suffering a heart attack made Charlie Taylor realise he needed to make some lifestyle changes.   parkrun has become part of that change for Charlie. Here’s his story.   In 2016 I retired from being a HGV driver after nearly 40 years of tramping the roads of the North East and Scotland. I used to run…