I have been a GP at the same practice in Southport for 23 years. My interest is cardiovascular disease, diet, exercise and diabetes, and over the past few years I have become increasingly passionate about the benefits of ‘lifestyle medicine’. In other words, what people can do to help themselves before resorting to lifelong medication.

We know that regular exercise reduces the risk of a heart attack or a stroke by a similar amount as being on a statin tablet or taking a blood pressure pill. When I ask my patients whether they would rather take medication for the rest of their lives or alternatively try improvements to their diets and increasing their exercise, they almost always choose the latter.

Earlier this year a friend from my running club, Keith Lunt, was involved in setting up Southport parkrun. The start line is 800 metres from my front door and right in the middle of the area covered by my medical practice. I’d done one parkrun a few years before so I was interested to see how a parkrun in Southport would go. At that time I was recovering from knee surgery and although I couldn’t commit to being part of the core team right away, I was keen to volunteer until I was fit enough to begin running again. 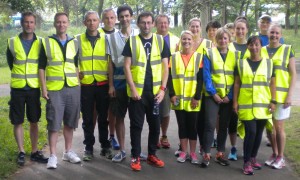 I’m not always the sharpest tool in the box when it comes to appreciating the bigger picture, but I knew after a couple of volunteering sessions that something special was happening and that I wanted to be a part of it. As well as seeing work colleagues – other GPs, nurses, our Practice Manager and staff at parkrun – there were loads of my patients too.

I’ve seen many, many people exercise themselves back to health. It’s a win-win situation for my patients and the NHS. My patients are healthier, happier and on fewer medications, and the NHS saves a fortune on unnecessary drugs and dealing with their side effects.

An overweight, asthmatic young woman came up to me at the start one morning and said she had never run before but was keen to improve her health. 40 minutes later she crossed the finish line with an enormous smile, pumping the air with her fists. She’s been back every week since.

A young woman who I’ve known for years since she moved up from London has had ongoing issues with anxiety and depression asked me for help and advice to manage her excessive drinking. She has two young boys. She had already done most of the hard work herself to turn her life around, but getting her involved in parkrun has been an important part of the process. She runs up to the finish line every week to rapturous applause and with a smile from ear to ear. She’s beginning to rebuild her self-esteem, starting to see herself as a hero with hidden strengths and resilience rather than as a victim of her circumstances.

“Running isn’t easy; it is hard and takes real effort. Every single person on that start line is a hero.”

And then there is Scott, who is happy for me to share his information. He’s in his 40s and has a very strong family history of type 2 diabetes which affects most of his male relatives. A couple of years ago he was told by his GP that his blood tests had come back in the diabetic range. Determined not to end up as yet another one of the family’s diabetics he decided to turn his life around. His main motivation was his love for his son – he wanted to show him that diabetes wasn’t inevitable.

Scott has made substantial changes to his diet and is exercising regularly. He came bouncing up to me at parkrun last week just bursting to share the news that his latest blood test for diabetes was no longer in the diabetic range – and not even in the pre-diabetic range – but was completely normal! He would have been a perfect candidate for lifelong medication and all the problems and complications that diabetes can bring but he has run himself back to health. parkrun has been a big part of this process.

Almost every day I’m inviting patients of mine to come to parkrun. I’ve had a number of successes with people with anxiety, depression, diabetes and heart disease as well as those who want to improve their blood pressure or get a bit fitter. Ideally I suggest they sign up when they get home, but there are occasions when I help people register after a consultation if they lack the IT skills or confidence to register online themselves.

“It’s a win-win situation for my patients and the NHS. My patients are healthier, happier and on fewer medications, and the NHS saves a fortune on unnecessary drugs and dealing with their side effects.”

My practice is working hard to lead by example and practice what we preach. Three of the GPs and their spouses are regular parkrunners as well as our Practice Manager, Practice Nurse, Palliative Care Nurse and several members of our reception staff. Three generations of my own family have run, including my Dad who celebrated his 80th birthday by doing his first ever parkrun. He turned up in a pair of shorts that were 30 years old, odd socks, and his ‘smart shoes’. Finishing just in front of him that day was a woman in her eighties with type 2 diabetes, angina and a highly competitive streak!

In my pre-run briefings I always try to highlight someone inspirational. It’s a fantastic way of boosting someone’s self-esteem and a wonderful way of motivating others. People love to hear a story. Running isn’t easy; it is hard and takes real effort. Every single person on that start line is a hero. Staying in bed is such a tempting option, yet week after week people get up and work hard to improve their health.

Last week at the pre-run briefing I talked about my surgery’s Palliative Care Nurse, Angela. Not only is she a great nurse who has had made a real difference to some of my patients in the most challenging situations, she is a wonderful role model too. She started running eight years ago to try to get herself into shape. Now, five marathons later and four and a half stone lighter, she is a regular at Southport parkrun.

Last week Angela ran with her daughter and mother – three generations exercising together. How brilliant is that?