My first memory of 2015 is from 8 January. It’s of my family standing around my bed in a hospital room, trying to explain to me what had happened. Not a lot was sinking in as I was still heavily sedated, but they were telling me that I’d collapsed on New Year’s Day, that I’d been rushed to hospital, and that the doctors had found a complete blockage within one of the arteries in my heart. That still seems surreal to me now, so imagine how it sounded when waking up after a week sedated in a hospital bed.

I’d suffered a full on cardiac arrest at the age of 34.

I tried to piece together what happened but my short-term memory was completely wiped – apparently a common occurrence for people that have been through a trauma, and an example of the body’s self-defence mechanism. I didn’t even remember starting parkrun, let alone finishing two of them (I did the New Year’s Day ‘double’ at Peckham Rye then another at Hilly Fields). In fact the end of December was also a complete blank as well. It’s probably just as well I have no memory of the day, as the story got more and more frightening as people relayed what had happened to me.

I finished the second parkrun (my 58th in total), was in line to have my time recorded, complained to my friend that I wasn’t feeling well, and then collapsed to the ground. My heart had gone into “ventricular fibrillation” – where for whatever reason it just couldn’t pump enough blood round my body… and then nothing. It stopped beating.

There’s no doubt that I survived only because of the intervention of my fellow parkrunners who thankfully had been trained on life-saving techniques. A team of four of them administered CPR for more than 10 minutes while we waited for an ambulance. They somehow kept my blood (and crucially, oxygen) pumping round my body, which meant that when the ambulance arrived they were able to shock my heart back into a normal rhythm and keep me alive.

I now know that surviving an out-of-hospital cardiac arrest is rare – surviving for more than 15 minutes without a regular heartbeat is extremely rare – and making a full recovery without brain damage or ongoing heart problems is almost unheard of. They put my chances of survival somewhere between 2% and 4% (thankfully this statistic wasn’t passed onto my family at the time!). An ambulance took me to King’s College Hospital, where they removed the blockage in my heart and re-enforced the artery.

So what caused the blockage? Well, that’s the bit nobody has ever really been able to explain. Whatever caused it, the biggest positive was that they fixed the problem, and that all the scans were showing my heart to be functioning normally after the operation.

For the first month after the arrest, I couldn’t even imagine running again. I was in hospital for 23 days, and when I was finally discharged my legs were so weak I couldn’t walk to the end of my road without feeling like I’d done a marathon. Apparently for many people the hardest part of recovery from any sort of heart attack is psychological – that constant worry about it happening again.

This is where the hospital did something amazing to give me peace of mind – they fitted me with my own personal defibrillator. I have a small device implanted into my side, with a cable that runs across my heart, and this device monitors my heart activity. If my heart ever goes into a dangerous rhythm, it will administer a shock that should effectively ‘reboot’ my heart and get it working again. This means that if it did happen again, I wouldn’t have to rely on my team of life-savers or the appearance of an ambulance to get my heart back into a normal rhythm. As weird as it sounds to have a device sewn into your chest, it provides amazing reassurance to know you have your own little insurance policy should anything go wrong again.

I started with a few quick walks on the treadmill, and within a few months I had built up to being able to run properly again. On 8 August 2015, I made my return to parkrun in a not-too-shabby time of 28 minutes 47 seconds.

“Today was my 50th ‘bonus run’ since being given my second chance. I was delighted to do it at Hilly Fields parkrun, the first time I’ve been back.”

Every time I go back to parkrun I’m reminded of the fabulous people at Hilly Fields who kept me alive. It was only their amazingly quick thinking and teamwork to perform CPR on me for more than ten minutes that gave me the chance to pull through and get back to running. 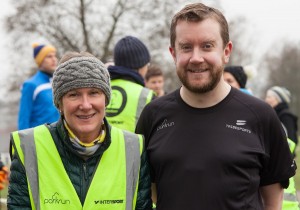 Neil with Siggy, who was one of the team of parkrunners who performed CPR on him

Late last year I finally joined the 100 Club, but for me it is today’s parkrun – my 108th – that is my own major milestone run. Today was my 50th ‘bonus run’ since being given my second chance. I wonder if parkrun does a milestone t-shirt for that?! I was delighted to do it at Hilly Fields parkrun, the first time I’ve been back since suffering my cardiac arrest there two years ago.

My time was 25:41, nearly two minutes quicker than that fateful run on New Year’s Day 2015, but the time is largely irrelevant. I got round, my heart behaved impeccably(!), and the reception I received from the Hilly Fields run director, volunteers and regular parkrunners was fantastic and, to be honest, a little emotional.

Several people came up to me to say that they were there that day, and how scary it was for them despite not knowing me. They told me that it meant a lot to everyone that I am in good health and back doing parkrun.

Hilly Fields received a defibrillator from the London Ambulance Service a few weeks after my cardiac arrest. I am now helping the LAS fund more AEDs for public places by running the Reading Half Marathon in March and donating any sponsorship to their charitable fund. I set an ambitious target of £3,000 (enough for three AEDs) and am very nearly there already.

I’m so pleased to see that even in the short time since my own cardiac arrest, parkrun as an organisation is well on its way towards its goal of all 5k parkruns in the UK having access to AEDs. These fantastic machines massively increase the chances of survival from cardiac arrest and are incredibly simple to use.

A big thanks to Suzi Mitchell for the photos