Hi there, my name is Kirsty Morley, I’m a mum of a parkrunning family. We have three generations of parkrunners both running and volunteering every weekend at Warrington junior parkrun and Warrington parkrun.

In February my son’s school, St. Benedict’s Catholic Primary School, had a sports-themed week planned where the children were given experiences of lots of different sports from martial arts to basketball. The culmination of the week was an open invitation to the whole school to attend Warrington junior parkrun.

During the sports themed week I had been invited by the St. Benedict’s headmaster, Liam Anderson, to speak to each year group over a four day period, starting with the four and five year-olds in reception and ending with 10 and 11 year-olds in year six.

The purpose of my visit was to talk about running, in particular junior parkrun, and to invite all the children to the following Sunday’s Warrington junior parkrun. I had a wonderful time talking to the children, explaining what junior parkrun is all about, what great fun it is and all the while encouraging the children to come along. I also took the opportunity to speak with the staff and gained two new volunteers from my visit!

I was very happy to be the Run Director the week of St. Benedict’s visit. There was a fantastic show of support from the children, parents, families and teachers of St. Benedict’s as well as all the regular junior parkrunners, mums, dads, grandparents and volunteers.

On the day of the St. Benedict’s run (19 February) we had 113 children run with lots of family and staff support – we also had fantastic numbers for volunteers, used every hi-vis vest and doubled up on several marshal points. The attendance of 113 was much higher than average (at the time it was our second highest) and the first time Warrington juniors had reached triple figures since July 2016. 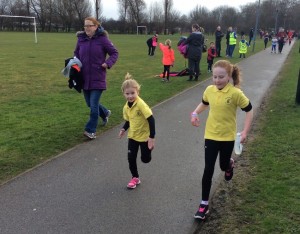 “After finishing her run, Caitlin had run back to find her little sister to encourage her to the end of her run. Caitlin and Erin have so completely embraced junior parkrun – they are both an absolute joy. They both throw their hearts and souls into each run.”

It was wonderful to see so many new families at Warrington junior parkrun for the first time. I saw so many happy faces as the children ran, walked, skipped and sprinted around the course. Some children ran with friends, family members or even their class teacher. The sense of achievement that the children felt as they crossed the line and the enjoyment they got from participating with their families and school friends was great to see. 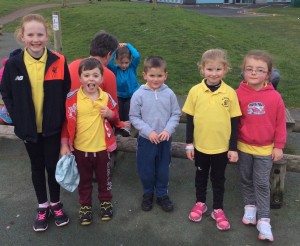 “This photo shows five St. Benedict’s pupils. On the far right is Isobelle who ran for the first time with school. Isobelle worked so hard on that first run and bless her, burst into tears as she crossed the finish line (it can be quite emotional for a little child the first time they run). But despite that emotional first run, Isobelle returned the following week with a huge smile on her face!”

Since the St. Benedict’s run our attendances have been much higher, even when it was bucketing down a few weeks ago ago! Every week since then we’ve had at least a dozen St. Benedict’s pupils taking part, many of whom were completely new to junior parkrun.

As well as encouraging new starters to junior parkrun, my talks at St. Benedict’s seem to have reinvigorated existing runners. Children who hadn’t run at all over the winter period returned and ran with newfound enthusiasm and joy. 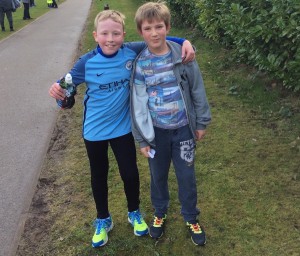 Year 5 St. Benedict’s pupils Max (left) with first-timer Sean, who after running with his school for the first time has run junior parkrun every week.

If I had to pick someone who has stood out I’d mention one of the pupils, George, who ran for the first time with school and who has run every week since. George puts such a lot of effort into his run – it seems to mean a great deal to him – he wants to really try hard, to throw himself into his run.

And I’m very proud of my two sons, Rowan and Teddy. Teddy completed his 12th junior parkrun two Sundays ago, which was the first one he’d completed in nine months. Teddy has learning difficulties, which sometimes makes it challenging for him to take part, so it felt very special on Sunday when he was able to run.

On a personal note, junior parkrun and parkrun are really important to me and have been somewhat of a lifeline.

In early 2016 my nephew started attending Warrington junior parkrun. I’d never heard of junior parkrun or parkrun but liked what my sister-in-law and nephew were telling me. I asked my two young children if they were interested and they were very keen. So off we trotted one very cold and windy morning.

I have a long history of mental illness and just attending as a spectator that morning was rather challenging. I was absolutely wracked with anxiety and I didn’t have to actually do anything, just be there while my nine year-old ran by himself and my four year-old ran with his dad.

We continued attending Warrington junior parkrun with me quietly watching, my nine year-old running and my four year-old running with his dad, but I knew we had a potential problem in the very near future. My children’s dad works shifts and would not always be free to run with our youngest, Teddy. Teddy needed an adult to run with him, not only because he’s young but because he has asthma that can be induced by exercise and needs someone with him who can administer his inhaler if needed. So, I had a choice before me; on the Sundays the boys dad was at work we could just miss junior parkrun, or I could run with Teddy.

Only thing was, I was extremely unfit, overweight and quite honestly not capable of travelling that 2k distance at the speed my son did. I was 38, had zero exercise in my life, hadn’t run since school and was dealing with crippling anxiety and depression. But I just couldn’t let my children down; they loved going to junior parkrun and I could see it was a wonderful thing for them and I wasn’t going to be the one who said, no, we’re not going today.

So after dropping my children off at school I would walk to Orford Jubilee Park, where Warrington junior parkrun takes place, and teach myself to run. The first day I ran from one lamppost to the next and instantly found my throat and chest burning; I was gasping for breath and most of me seemed to be hurting. It was really hard, I was so unfit, I didn’t actually own any sports clothes and probably looked rather peculiar (I certainly felt it). But I kept going, fixating on the next lamppost, bin or park bench, desperately determined not to let my children down.

Over the ensuing weeks I became fit enough to run junior parkrun with my Teddy and it was wonderful! I absolutely loved being able to run with my son. I’d not learnt to run that 2k for myself, not because I wanted to do it for me – that would never have been a big enough reason as I didn’t feel I was worth it – but my children were more than worth it.

But the funny thing was, once I could do it, run that 2k, I discovered I very much wanted to do it. And I began to dream, began to dream dreams for me and I thought, what if I could run the Saturday 5k parkrun? So I kept on running round Orford Jubilee Park until I thought I was ready to tackle Warrington parkrun.

I ran my first 5k parkrun in May 2016 in 36 minutes, and since then my time has come down to 28 minutes. I’ve volunteered in all the roles, being Run Director for the first time in December. This was a phenomenally big deal to me – a year before I absolutely could not have, in any shape or form, stood up in front of a group of people and managed coherent speech. To be fair, my first time as run director did involve some incoherent speech. I think I actually forgot my own name I was so nervous! But I’ve been Run Director twice since and remembered my name both times I’m pleased to report.

I can’t tell you how much I’ve changed as a person. Before junior parkrun and parkrun I was struggling to keep my chin above the surface of the water. The enormous impact running has had on my mental health, on my whole life, I really can’t understate it. It is so wonderful and entirely unexpected to suddenly be living again.

I’ve physically changed too. I don’t own any scales so don’t know how much weight I’ve lost but I’m three dress sizes smaller now.

My advice to other parents thinking about doing a similar talk to promote junior parkrun in their local school is to firstly find out if there are any existing parkrunners on the staff, as it does help to have this shared passion.

Talk to the staff about what junior parkrun is all about – maybe show some photos of your local event to help illustrate what you’re trying to communicate. Share your enthusiasm for parkrun and share some stories about the good it has had in your children’s lives.

Going into school itself to talk to multiple classes of children might not feel easy to everyone but in my experience the children were genuinely very interested. To have the attention of the children, to be able to talk with them about something you feel so passionately about is such a special gift.

The reward of those children then visiting junior parkrun, week after week is priceless. It’s worth any nerves you might feel before.