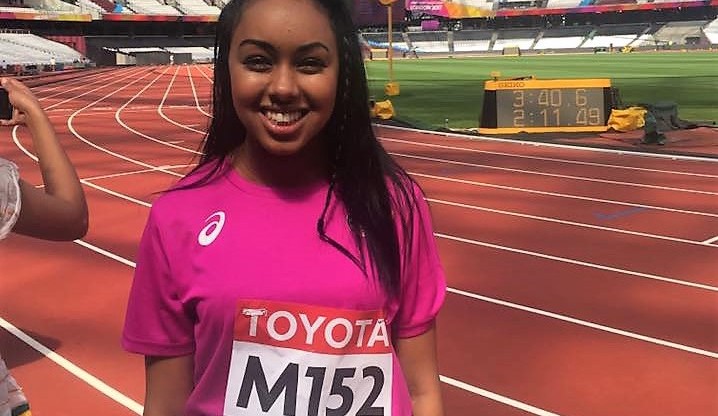 Five years ago I was very fortunate to be nominated by Diabetes UK to carry the Olympic Torch for services to volunteering. I’ve had type 1 diabetes for 16 years and for 13 of which I’ve also done athletics. Therefore, I was honoured to be able to show, whilst carrying the torch that having diabetes is no reason not to achieve your sporting dreams.

Having felt so lucky to carry the torch, and to have a taste of what it was like to be involved in a global sporting event like the Olympics, that fast forward and when I got the chance to give something back and volunteer at the London 2017 World Athletics Championships I hopped, skipped and jumped at the chance! I made my way to London to report for my volunteering role in the Queen Elizabeth Olympic Park, in Stratford, as a Press Operations volunteer and it’s been brilliant. I got to see Usain Bolt run in the final of the 100m, which was a dream come true, and to look after the women marathon runners at Tower Bridge to name but a few highlights.

But on the middle Thursday of the Championships, my volunteering role brought another dream to life, when I got to run on the actual athletics track! It’s a tradition during a global event such as the World Championships or the Olympics for the media to do a race too and this year was no exception. So, I got to represent Great Britain in the 800m event and to run on the same track as the athletes I’ve been so inspired by throughout the Championships and at the London 2012 Olympic Games. I’ve never done an 800m race before, as I’ve been a short distance sprinter during my athletic career, but have done parkrun for enjoyment and fitness for a number of years.

Recently coming back from injury, parkrun has also been an essential part of my rehabilitation process, enabling me to build both my stamina and my confidence back up and which prepared me so well for my Olympic Park debut. My finishing position was in the middle of the pack, but to see the smile on my face you’d have thought I’d won gold. It was an incredible experience to run with the world’s press, who represented every country that you see in the London 2017 World Athletics Championships.

But my passion for volunteering won’t be staying at the athletics track. I’m thrilled to be one of the parkrun PROVE project Diabetes Champions, working with my fellow Champions to support people with diabetes who already walk, jog, run or volunteer at their local event and to encourage and empower those who are yet to make their parkrun debut.

Throughout my athletics career I’ve seen the incredible difference that physical activity has made to my diabetes management and I hope that telling my story, of how sport and volunteering has helped me fulfil my dreams will let others know that having a chronic condition is no hurdle to sporting success.

parkrun’s PROVE project has been set up to encourage more people with disabilities or long term health conditions to participate at parkrun.  If you’re living with diabetes we’d love to have you join parkrun UK’s official Facebook group for parkrunners living with diabetes to share advice, tips, opinions and stories on all things related to parkrun.