Black Combe parkrun in Cumbria became the first parkrun event in the world to launch inside a prison on 4 November 2017.

One of the participants that day was Alfy Kirkley (pictured left) who went on to complete 17 parkruns and set a new course record before his release last week. As he left, Alfy handed a letter to a fellow prisoner thanking him for introducing him to parkrun and promising to keep it up in the future.

Alfy has asked that we share his letter publicly in the hope that it will encourage other prisons to consider starting a parkrun, and to show how the motivation of a weekly 5k event can have a transformational impact on anybody’s health and wellbeing, whatever their circumstances.

I don’t do this often but I feel it’s a duty or something more that needs recognition. I feel that you and Shane Spencer [Black Combe parkrun Event Director] saved my life and gave me hope when I was at a low point in my life.

I was at the brink of suicide at one point as I was trapped in a big hole, so what I would do in that situation was get high on drugs. I loved it, because it took me away from all my problems until I’d run out then bang, they would hit me again all at once. I’d then create problems not just for myself but for others too. I felt as though nobody could help me because they didn’t understand my problem.

I’ll never forget when I met you. You came to my door and gave me the biggest bollocking ever – it came from nowhere. You told me I was worth more than that. I felt ashamed of myself but it sunk in and the penny dropped and you took me under your wing which I am grateful for. Not only that, you gave me self belief and self worth and got my head back on a level, not just physically but mentally as well, and I can’t thank you enough for that.

I’ve learnt a lot from you Lee and I’ve noticed that many others have too. You take time in helping people, especially vulnerable ones, when most people won’t even take the chance and say hello or even look at you.

I thank you for all the training you’ve taught me and I can honestly say it’s paid off because one minute I was known as a jail junky and now all of a sudden I’m the fittest and fastest man in HMP Haverigg. I’m not just physically healthy, I’m mentally healthy and prepared for release and to continue this work out there. I feel a duty not to let you or Shane down so that’s a promise. I will prove it.

I can’t thank you enough. I call you an honest, true friend and I’d definitely meet up with you out there and continue training and running – if you can keep up

So thank you again, take care and keep in touch mate.

Alfy ran his local parkrun with his daughter on the first Saturday after his release.

Further information about the launch of prison-based parkruns can be found here. 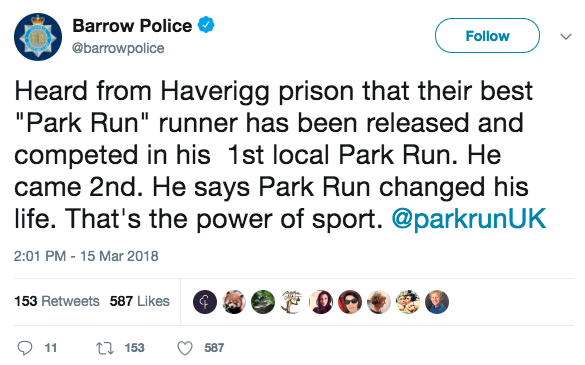