We never saw it coming

For the last ten minutes I’ve been rolling a frozen golf ball around the floor with my foot to ease a minor fascia niggle, as I’m determined to get at least another couple of runs in before next week’s Brentwood Half Marathon.

My ‘Twelve Week Training Plan’ hasn’t exactly been textbook. In fact, I skipped the first five weeks to go and visit Jack, the sports therapist, who worked on my dodgy hip every Wednesday morning. Am I a hypochondriac by any chance? Probably, I know my partner would say so!

But in all honesty, I’ve just never taken care of myself. I’ve smoked, I’ve stopped, I’ve started again.  I would like to lose some weight, but I can demolish a tub of Ben and Jerry’s straight after putting down my knife and fork at least three or four nights a week. And then I have the audacity to question why I’m always lethargic and even running to catch a bus requires a few rest days!

I’ve started to get my act in order over the last 12 months thanks to the young lady standing at my front door this morning. She’s eager to get over Barking & Dagenham junior parkrun to test out the new stopwatch she received as a birthday gift last week. Amelia’s my 6-year-old daughter. She recently completed her 50th junior parkrun, and somewhere along the line, the entire family has caught the running bug. 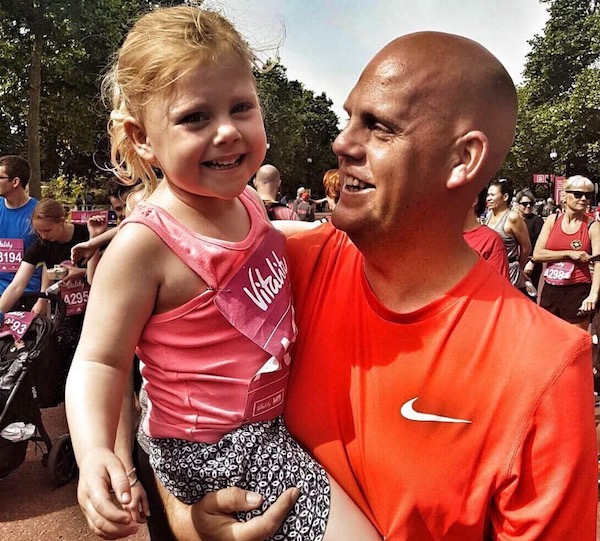 I have two daughters. The youngest, Evie, is calm, placid and relaxed like her mum. Amelia is so full of life that, at times, she can be quite high maintenance, argumentative and has the mood swings of a teenage girl (like her dad apparently!). At times we used to clash a fair bit. I’ll have had a long week at work, walk in the door, and within five minutes everyone’s in a foul mood because Amelia’s played up and I’ve over-reacted.

At the time I didn’t feel like it was a particularly big deal, until a few people made light-hearted comments about Evie being my clear favourite. I know it was only tongue-in-cheek, and it certainly wasn’t the case, but it made me feel that I needed some one-on-one daddy/daughter time with Amelia to improve things. It was then that I remembered the kids I’d seen running over Central Park in Dagenham.

I had no idea what “parkrun” was at the time, but I’d seen all the kids over there. So one morning in January 2017, Amelia and I headed over there to speak to the “people in the hi-viz jackets” where we were greeted by Sonya, one of the volunteers, who talked us through everything. By the following week we’d printed a barcode, and Amelia never looked back after that. 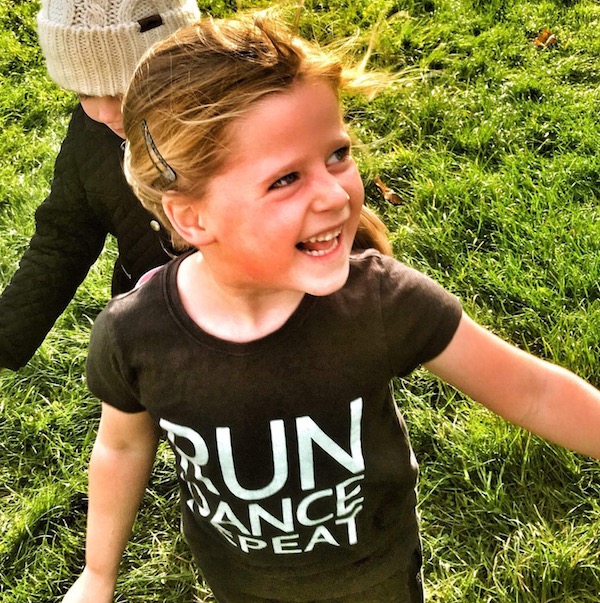 Obviously there were weeks when it was cold and it took a bit of persuasion, but on the whole she loved it. It brought out all the amazing aspects of her personality. She was laughing more, she was encouraging other kids as she ran, whilst showing a bit of competitiveness at the same time.

She’d give all the kids and volunteers a hug at the end of a run, go home happy, and her general behaviour in the afternoon was visually improved on what it had been on previous months. After about four or five weeks, Amelia caught Chicken Pox and couldn’t run for a couple of weeks, but she still wanted to go over and cheer on the others (from a distance obviously!). I was really proud of her. 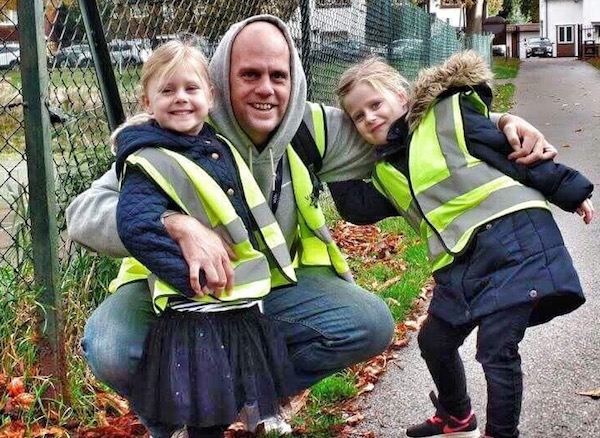 The people we had met were so welcoming, and the friendships she had started to make were having a really great effect on her. Our relationship went back to what it had been when she was younger. It wasn’t just her relishing weekends more – so was I. Her company was far more enjoyable and I was less irritable.

After a few weeks, half way through the run, Evie turned up with my better half Jenny to see what all the fuss was about. I can’t lie, at first I did think “hang on – everyone agreed Amelia and I needed some alone time… now we’re getting along nicely, you two can’t come along and crash our party!”. As it turned out, parkrun became even more enjoyable as a family. It’s now something the four of us look forward to every weekend.

Since her fourth birthday, Evie has also started running. She’s not yet as enthusiastic as her sister, but it’s hard to convince anyone that running in rain on a cold frosty morning can actually be fun, let alone a four year old! Roll on summer…

What did come as a surprise, was Jen and I attending our first Saturday 5k parkrun. I’m not really sure where that came from… a few of the junior parkrun volunteers had mentioned it, so we gave it a go. Somehow, 10 months later we’ve both joined Dagenham 88s, our local running club… we certainly did not see that one coming! 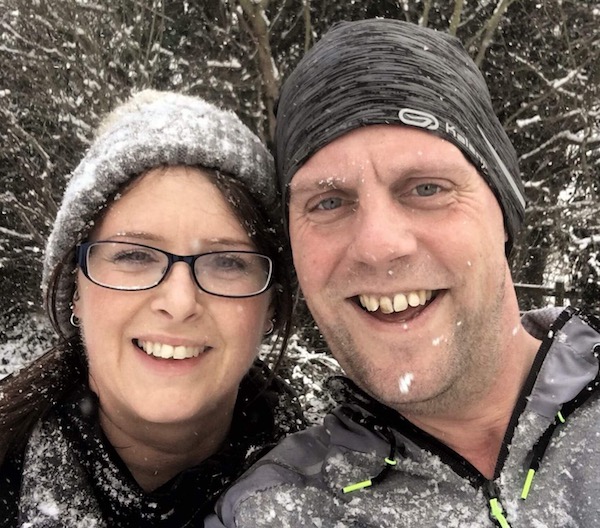 What started as just a Sunday morning junior parkrun has completely taken over our lives. This month alone we’ve had our ‘parkrun family’ round for evening drinks, we swapped Valentine’s Day dinner for a 10k Chase the Moon event and we’ve been over to the Olympic Park with friends the girls have made through parkrun.

Despite the recent awful weather, the last month became about running. The first day of snow, Jen and I took an extended lunch break to go for a run (still kids at heart!). Then, when it iced over and our club’s regular run was cancelled, we used it as an excuse to go for a carvery with other members from Dagenham 88s. When the kids were round their Nan’s, and we actually voluntarily opted for a bit of hill training over crashing in front of the television!

Jen’s doing amazingly well (far better than me and my old-man legs!). She’s grown really close to the other women at the club, running in the Chingford League, and then Parliament Hill a couple of weeks ago. It’s fantastic to watch her thriving and enjoying the sport so much.

Often, when posting to the Barking and Dagenham’s junior parkrun Facebook page, we use the hashtag #parkrunfamily… that really is what it’s become for us. Not a day goes by when I don’t speak with someone or other from the parkrun team. Usually my new best mate Sam, who has been such an inspiration and really taken a keen interest in my family changing our lifestyle for the better.

Sam is “72 years young” as he always says… but he really is! If there’s a fitter 72 year old out there I’d love to meet him. He took me on a 30 mile bike ride a couple of months back. On the evening while I was recovering, Sam went out for a 5 mile run! The time he has invested in me and my family is amazing. I never ask anything from him, he’s just there, so willing to help out others.

Sam’s wife Timi is our volunteer coordinator at junior parkrun. She recently became the first Leeds Building Society Community Hero in the country and with good reason. Timi lives life at 100 miles an hour, I’m sure she has little more than 10 minutes to herself a day. Always volunteering in one way or another along with Sam and their two children Sonya and Kresh.

Kresh set up Barking and Dagenham junior parkrun, and Sonya is our communications person and more recently became a junior parkrun Outreach Ambassador. Sonya and Timi have both encouraged Jen and I to start volunteering on a Sunday morning, really making us feel part of things.

The family are the absolute core of Barking and Dagenham junior parkrun, and between them are responsible for turning so many individuals to healthier lifestyles. Amelia and I were very lucky to have met Sonya that first morning. As you can see, the initial welcome we received has lead on to so many changes in the way our family spend our lives.

These days I’m happy to tell anyone that will listen about parkrun. The people, the community, the support everyone gives each-other – it can’t be beaten. I can’t wait for next weekend when Jen and I run our first half-marathon with the people we met that very first weekend at Barking and Dagenham junior parkrun. And thanks to them, I can look forward to a much healthier future with the three ladies in my life.” 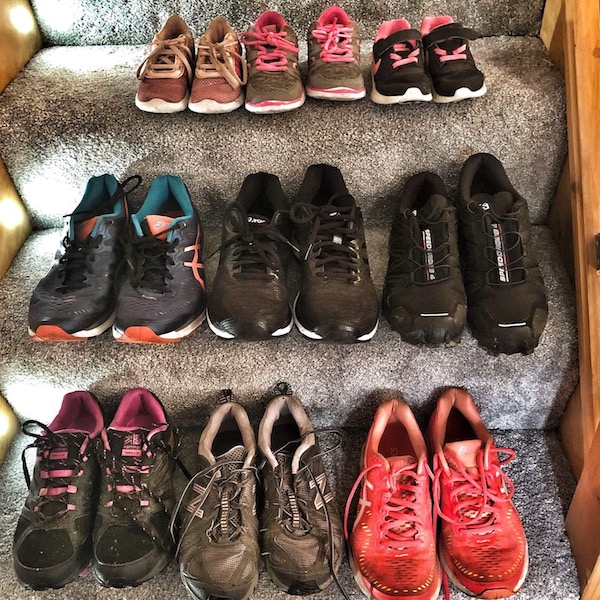